Like so many other post-"Shaun of the Dead" horror-comedies, the execution of "Dead Snow 2" is rarely as funny as the concept. Norwegian director Tommy Wirkola and his two co-writers do virtually nothing with their sequel's most novel twist: what if you made zombie Nazis fight zombie Communists? That joyfully moronic question is answered in a comically drawn-out battle royale. But, until then, viewers are stuck watching unmoving human protagonists like Martin (Vegar Hoel), the only living survivor of "Dead Snow," prepare to take on a horde of goose-stepping flesh-eaters. All creative roads lead to the film's big climax, and the jokes scattered along the way are usually not outlandish enough to make "Dead Snow 2" memorably funny. Then again, you will probably enjoy "Dead Snow 2" if you're amused at the thought of zombie Nazis grunting, stabbing, and Sieg-heil-ing their way through a Sam Raimi-inspired gross-out comedy. It's for-horror-nuts-only, but if you can see it with a rowdy crowd, "Dead Snow 2" will appreciate exponentially.

In a tellingly timid introductory recap, "Dead Snow 2" gently reminds viewers what happened in "Dead Snow:" Hitler-worshippers, led by Colonel Herzog (Orjan Gamst), killed six of seven thrill-seeking co-eds during an ill-timed visit to a Norwegian cabin. Martin previously thought his undead, bigoted assailants were after a cache of gold that he and his friends kept for themselves. But now, after returning the zombie Nazis' gold, Martin realizes that Herzog and the gang won't go away until they fulfill Hitler's last command: punish a nearby Norwegian village for their wartime efforts. To stop Herzog, Martin enlists the help of the Zombie Squad (including Martin Starr), a trio of geeky American survivalists that have spent years preparing for a zombie apocalypse. But when Herzog's numbers prove too great, Martin uses a supernatural severed arm he cut off Herzog's body, and raises his own army.

Turn back now if you're not already chuckling. The makers of "Dead Snow 2" rely heavily on the inherent absurdity of their film's premise, and expect you to do the rest. Several comedic scenes that rely on pregnant pauses are funny, especially scenes starring "Sidekick Zombie" (Kristoffer Joner), a rapidly-deteriorating, Nazi-fighting tourist that Martin raises from the dead. But the sight of monsters grunting, and killing zealously while dressed up as World War II cos-players is only so funny since "Dead Snow 2" generally isn't mean enough.

In any other type of film, the fact that the Zombie Squad's members are ostensibly sympathetic would be a good thing. But they're so gawky and earnest that you keep expecting, nay, hoping that one of them gets dispatched by a brain-nibbling anti-semite. Daniel (Martin Starr), a greasy, trenchcoat-clad geek, is the most obnoxious of the group. He squeals with delight when he first discovers that he is, after years of fantasizing, capable of destroying zombies. But, after that, Daniel's a hatchet-chucking killing machine, which is only so much fun to watch.

"Dead Snow 2" picks up when it is nasty enough to be silly. Overkill is the nature of the film's "Evil Dead"-inspired comedy (Martin's severed hand is an ostentatious nod to Raimi's earlier horror film). So the scene where Martin wipes away a hail of vomit in order to gawk at zombies through a closed window is funny. Also, it's rare, but Wirkola and co. do right by their preposterous stars by making them pose like punch-drunk pro-wrestlers on their way to a steel cage match.

But once the adrenaline dies down, you're left with technically-assured, but lifeless confrontations that are only as charming as they are funny. There should be more quips as satisfying as "I didn't know there was an ugly face convention in town," and there aren't. The makers of "Dead Snow 2" only fly their freak flags at half-masts, so their helium-high-concept comedy often looks like something Beavis and Butthead's Scandinavian cousins would make. 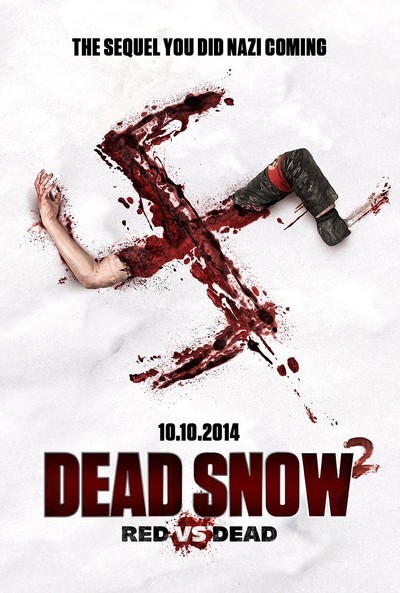 Rated R for strong bloody horror violence and gore throughout, and language including some sexual references