"The Guest" announces its intentions and style in the short opening sequence. There's a close-up of a guy, shot from behind, running down an empty road through a desert. He's wearing heavy military-style boots. We don't see his face. Suddenly, with a blast of terrifying music, the title screen comes, huge purple letters on a black background. The next shot, accompanied by another alarming blare of scary music, shows a horrifying-looking scarecrow, lording it over the desert landscape. In three shots, director Adam Wingard announces what "The Guest" will be all about, tells us what the film is. The opening locates us easily and confidently in space, time, mood, and genre. "The Guest" delivers on that initial promise.

David ("Downton Abbey"'s Dan Stevens) shows up unexpectedly on the doorstep of the Peterson family, made up of parents (Sheila Kelley and Leland Orser), a teenage daughter named Anna (Maika Monroe in a fantastic performance) and grade-school-age son Luke (Brendan Meyer). David announces himself at the door, quietly and politely, with his gentle Kentucky accent, as a friend of their eldest son who had been killed in combat. The Petersons, still reeling from grief, let the stranger in. He is intense, but submissive, speaking quietly to each family member, providing them with positive memories of their fallen son, and within 24 hours he has been invited to move into the dead son's old room.

On the surface, David presents himself as an old-fashioned guy, with good manners, eager to make himself useful to the grieving family. It is the least he can do for his dead friend. He becomes a protector to young Luke against the bullies at the boy's school, and Anna, fighting with her own suspicions about this new "guest," can't help but take notice of the guy's blazing baby-blues and phenomenal body, glimpsed wrapped in a towel in the hallway after his shower.

The audience can sense immediately that David is not the lost lamb he pretends to be; the opening sequence alone has already clued us in. But "The Guest" takes its time revealing what is really going on, and has a lot of fun in that slow reveal process.

Director Wingard and his regular screenwriter collaborator Simon Barrett are interested in genre mash-ups and the dramatic possibilities of comedy-horror, as evidenced by their previous full-length feature "You're Next." "The Guest" goes even further in that direction. The music (by Steve Moore) suddenly blasts throughout, with moments of pulsing techno unease, as Anna, crouched in her bedroom decorated with Goth-Girl skull-and-crossbones, desperately tries to figure out more about the hot interloper, now sleeping in the room next door.

Thomas Hammock's production design adds to the camp flavor of "The Guest", sometimes tipping over into blatant parody. The film takes place in the weeks leading up to Halloween, and therefore the screen is filled with Halloween decorations crowding in on every single scene from the walls, the ceilings, the counter-tops. Even in quiet safe moments sitting around the kitchen table, sharing tender memories, the characters are leered at on all sides by jack-o-lanterns and black cats and horrified ghosts. There's even a great scene in a Hall-of-Mirrors Haunted House maze, echoing with disorienting demonic laughter. The mood is both legitimately terrifying and hilarious.

The second half of the film careens headlong into glorious paranoia and conspiracy-theory, reminiscent of 1970s political thrillers, involving gleaming board-rooms populated by stone-faced military brass, top-secret briefcases, and world-class weaponry that even the military wouldn't admit to developing. David's strangeness is apparent from the get-go, but it's just the tip of the iceberg.

None of this would work without Dan Stevens' fascinating and compelling presence at the center. When he left "Downton Abbey," after becoming an old-school heartthrob as Matthew Crawley, the reluctant heir to the great house, fans of the show howled in protest. Here, he shows his versatility, something he had been itching to do during his years on "Downton Abbey." Stevens' accent is seamless, without even a hint of his British origins, and he brings a gentleness and openness to the character that manages to seem extremely "off," as well as a truly sinister undercurrent, something dead-eyed and remote.

Wingard and Barrett have a perfect eye and ear for this type of material. They have fun with their influences, paying homage to John Carpenter and others. They're not afraid to be silly and bold. "The Guest" could have drowned in top-heavy seriousness, while trying to make some political point. But it's really not serious at all. That's a compliment. 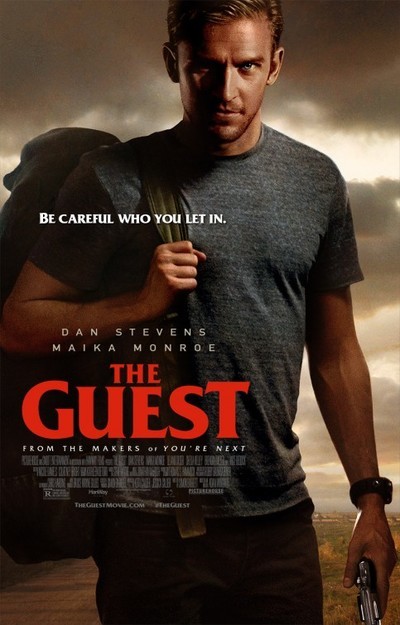 Rated R for strong violence, language, some drug use and a scene of sexuality