People started lining up for the Saturday morning Disney, Marvel Studios and Lucasfilm live-action presentation at D23 Expo at the Anaheim Convention Center well before the 10 p.m. listed time the night before, camping out from Friday morning on the sidewalk. Latecomers at 4 a.m. Saturday morning were put on standby. With "Star Wars" and Marvel movies and stars to take the stage, the Disney nerdom has expanded and deepened the fanatical fervor.

Alan Horn, chairman of The Walt Disney Studios, reminded the audience that 2016 was a stellar year; the top five films from these studios were “Captain America: Civil War,” “Finding Dory,” “Zootopia,” “The Jungle Book” and “Rogue One: A Star Wars Story.” This year was off to a good start as well with Marvel’s “Guardians of the Galaxy, Vol. 2,” “Pirates of the Caribbean: Dead Men Tell No Tales” and “Cars 3.” The number one film of 2017 according to Horn is the live-action “Beauty and the Beast.”

“At The Walt Disney Studios, we could not do what we do without the support of the many Disney, Marvel, and Star Wars fans around the world,” said Horn. “We feel like our fans are a part of the family, and the D23 Expo is our chance to give a little something extra back to them.”

Horn introduced Sean Bailey, president of Walt Disney Studios Motion Picture Production, to present overviews of the Disney live-action slate. First up was “A Wrinkle in Time.” The live-action movie is slated to open on March 9, 2018 and is based on a 1963 science fiction fantasy novel by Madeleine L’Engle about a young teenage girl, Meg Murry (Storm Reid), whose scientist father, Dr. Alex Murry (Chris Pine), has disappeared, leaving her scientist mother (Dr. Kate Murry (Gugu Mbatha-Raw) to raise Meg and her siblings alone. Meg saves her father by traveling through a wrinkle in time and space into another dimension with the help of three supernatural beings: Mrs. Who (Mindy Kaling), Mrs. Whatsit (Reese Witherspoon) and Mrs. Which (Oprah Winfrey).

Ava DuVernay said that at D23 Expo, “I found my tribe: People who love movies as much as I do.” She was interested in directing “A Wrinkle in Time” because it is “a family story wrapped in an adventure story.” In her casting, everyone on stage was her first choice. She wanted to “make a film that looked like you,” she told the D23 Expo audience, one that showed diversity.

Reid commented that DuVernay was so patient and that watching Pine work was “amazing,” even though they had intense scenes together.

Pine noted that there’s a lot “about chemistry and alchemy” in filmmaking and how he chooses his projects. “Five minutes into meeting Ava, I knew I was going to do it.” He appreciates her focus and passion. She tells “the story that is on the page, hitting something on a cosmic level.”

Kaling noted that her character always speaks in riddles and “as someone who is a chatterbox, I thought it was fairly challenging.” Her dialogue was expanded beyond the book to update it, but also to be more inclusive because there is “so much wisdom in the world.”

Talk show host, actress and philanthropist and newly minted Disney Legend Oprah Winfrey, admitted that she had not read the book, but stated that “Ava mentioned to me it was a character that was not only the wisest woman in the universe but also an angelic celestial being.” That along with the allure of wearing gorgeous costumes and working with Kaling and Witherspoon made the project irresistible. “Who wouldn’t say yes to that?” 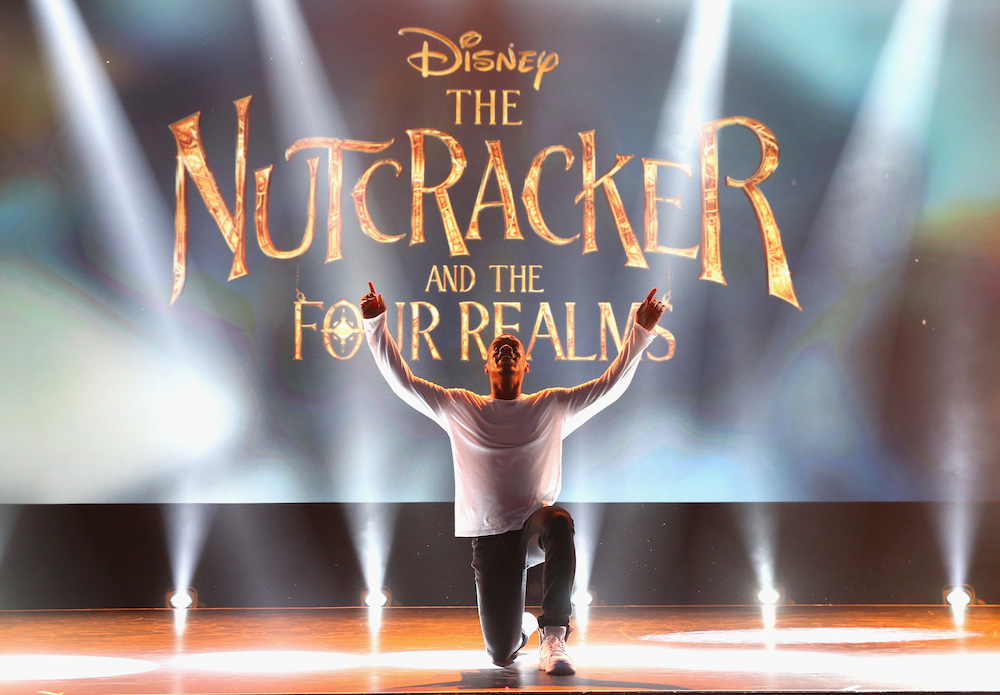 Another old source material is being given a modern twist: “The Nutcracker.” Sean Bailey, president of Walt Disney Studios Motion Picture Production, described the premise of “The Nutcracker and the Four Realms” to the D23 Expo audience. In a mysterious parallel world, there’s a Land of Snowflakes, Land of Flowers, and Land of Sweets. The fourth realm is dark and mysterious land ruled by the Mother Ginger (Helen Mirren) and her gang of mice.

Clara (Mackenzie Foy) receives a beautiful music box with a cryptic note inside: “Everything you need is inside.” That will lead her to her destiny according to Bailey. Clara has her godfather (Morgan Freeman) to help her and will meet the Sugar Plum Fairy (Keira Knightley) and the Mouse King (Lil Buck). Besides the classic music of “The Nutcracker,” the film will feature ballerina Misty Copeland and Los Angeles-based jookin dance phenom Lil Buck.

Before Lil Buck demonstrated his stylings, Bailey said, “The Mouse King is made up of thousands of mice—a cutting-edge CG creation. But we wanted him to move in a way that would be wonderfully surprising and incredibly cool, so we called on Lil Buck to provide the style of dance that defines the character. He is so talented and the way he makes this character move is unbelievable.”

“The Nutcracker and the Four Realms” is directed by Lasse Hallström and will open in U.S. theaters on November 2, 2018.

The crowd cheered wildly as Bailey introduced star Emily Blunt and director Rob Marshall for the Disney sequel “Mary Poppins Returns.” Blunt will star as Mary, taking over for Julie Andrews. She has always been a fan of Mary Poppins because “as a kid I found the idea of this magical, mysterious person whisking into their lives and making everything right, comforting.” Blunt admitted that she watched about 15 minutes of the original and stopped watching because “no one is going to out Julie Julie Andrews ... I needed to try to pay homage to Julie Andrews, but carve out a new space for myself.” This version of the character will be “a little more acerbic and weird.”

Marc Shaiman and Scott Wittman (“Hairspray” and “Charlie and the Chocolate Factory”) have been enlisted to capture the toneand style of the Sherman Brothers. Only Richard Sherman, 89, remains; Robert died in 2012.

In “Mary Poppins Returns,” Jane and Michael, the Banks children from the 1964 movie, have grown up and 25 years have passed. London and the world are in the Great Slump (AKA the Great Depression). Michael, a widower, now lives at 17 Cherry Tree Lane with his children. Jane (Emily Mortimer) pops in to help when out of the sky, Mary Poppins swoops down, sailing in on a blustery day via her umbrella. This time, her best bud is Jack, played by composer, lyricist, playwright, writer and actor Lin-Manuel Miranda.

Fans will be delighted that Dick Van Dyke who played Mary’s friend Bert as well as the director of the bank, Mr Dawes Senior, will return to play Mr. Dawes, Jr. One can’t help but hope for a Julie Andrews cameo. Angela Lansbury, Colin Firth and Meryl Streep are also featured in this film which is set to release December 25, 2018.

There are more musicals in the development. In his Sunday one-man show, Alan Menken revealed that he would be working with Lin-Manuel Miranda on the score for the live-action version of “The Little Mermaid” and with songwriters Pasek and Paul on a live-action version of “Aladdin.” Bailey confirmed on Saturday that “Aladdin” will be directed by Guy Ritchie and that the cast includes Mena Massoud (Aladdin), Naomi Scott (Jasmine) and Will Smith (Genie).

On Saturday, Bailey also confirmed that a live-action version of the 1998 animated feature “Mulan” is being helmed by Niki Caro (“McFarland, USA”) and that in the tradition of "Pirates of the Caribbean," a live-action movie based on a theme park ride, “Jungle Cruise” is being developed with “Moana” star Dwayne Johnson as the lead. 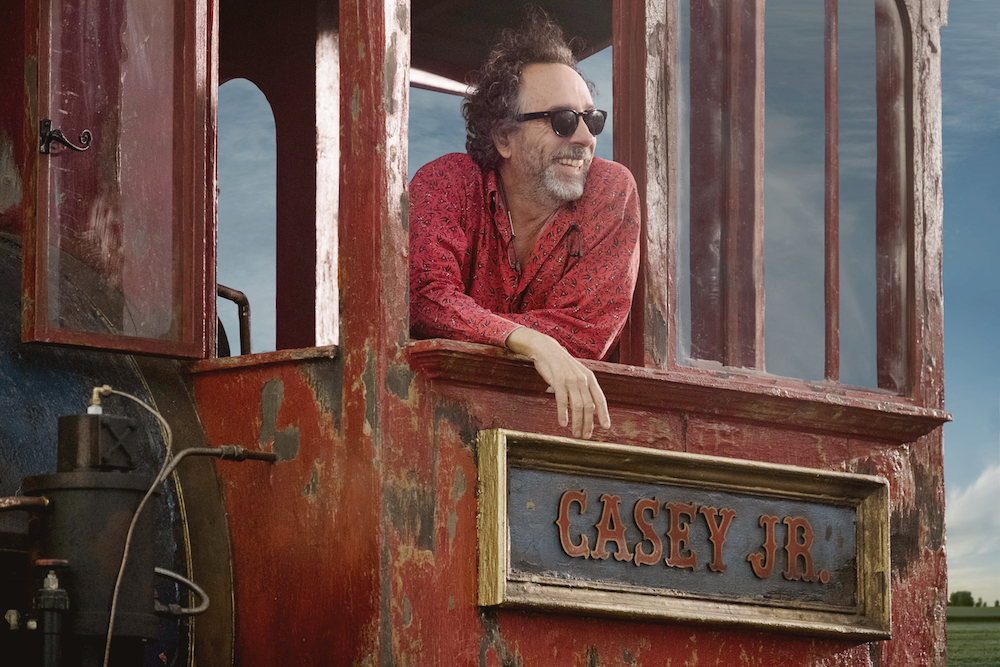 A life-size maquette of Dumbo was wheeled out on stage to help introduce the live-action version of the 1941 “Dumbo” which is being reimagined by Tim Burton. Burton sent a video where he noted that “Dumbo was always one of my favorite Disney films” and added, “We’re trying to give it the same heart, feeling and emotion that we all loved about the original.”

Horn and Bailey gave the crowd a surprise teaser of Jon Favreau’s live-action “The Lion King.” Favreau commented, “This is a story that belongs to everyone who grew up with the original film. I wanted to demonstrate that we could be respectful of the source material while bringing it to life using new techniques and technologies. We wanted to do something special for the D23 Expo audience and give them a first look at what we’re up to.”

Starring Donald Glover as Simba and James Earl Jones as Mufasa, the live-action version is currently scheduled for a July 19, 2019 release. 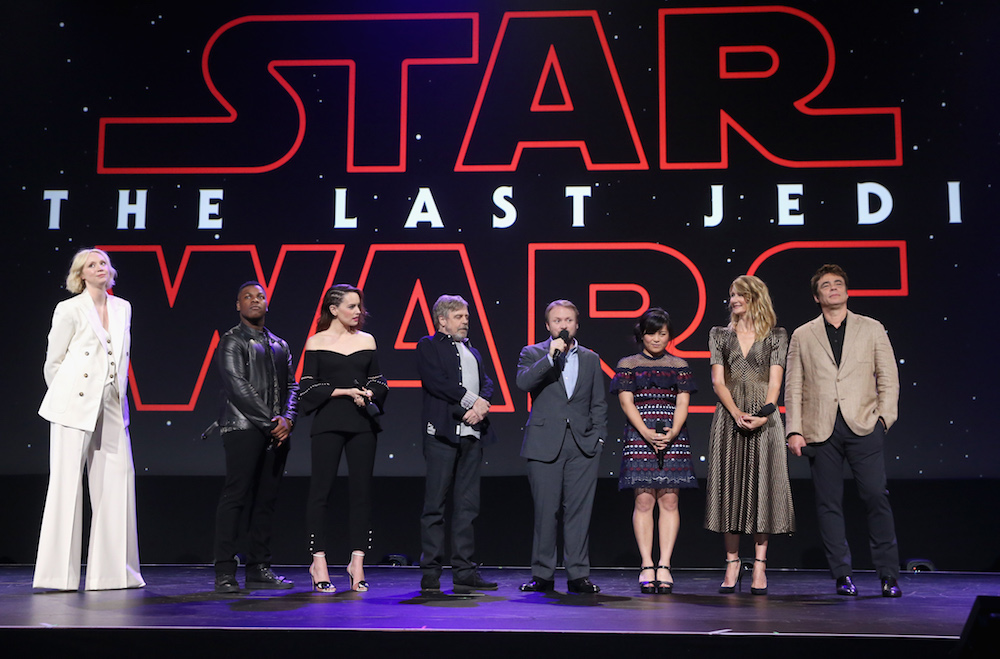 Horn welcomed writer/director Rian Johnson for the segment on “Star Wars: The Last Jedi.” Johnson introduced the talent, including Mark Hamill, Daisy Ridley, John Boyega, Gwendoline Christie, Kelly Marie Tran, Laura Dern and Benicio Del Toro. Hamill who had the day before become a Disney Legend quipped, “It’s so kind of you not to make me stand next to Gwendolyn” because otherwise he’d seem “a little short for a Stormtrooper.” Of the movie, Hamill said, “When I read the script there were so many unexpected elements which is great in a 'Star Wars' film" because as the Star Wars universe expands, "it’s getting harder and harder" to surprise audiences. He proclaimed this one “a game changer.”

In the clip that included behind-the-scenes footage, the late Carrie Fisher, who had also become a Disney Legend the day before, got the last words: “It’s about family and that’s what’s so powerful about it.” “Star Wars: The Last Jedi” opens in the US on December 15, 2017. 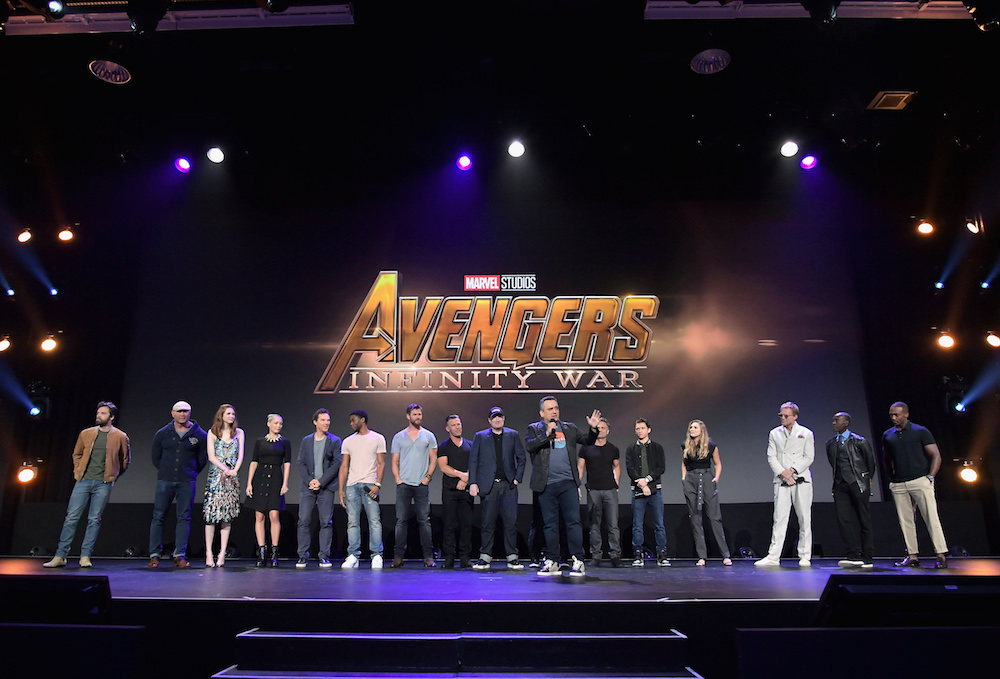 The "Star Wars" presentation was followed by another saga presentation. For a decade, Marvel Studios’ movies have alluded to a final conflict with the villain Thanos. Anthony and Joe Russo direct “Avengers: Infinity War” which includes all of the Marvel heroes that have been introduced in this movie series. For this presentation, many of the stars took the stage, including Robert Downey Jr., Chris Hemsworth, Mark Ruffalo, Anthony Mackie, Elizabeth Olsen, Paul Bettany, Benedict Cumberbatch, Tom Holland, Chadwick Boseman, Josh Brolin, Don Cheadle, Sebastian Stan, Dave Bautista, Karen Gillan and Pom Klementieff. One of the directors, Joe Russo, introduced exclusive footage. “Avengers: Infinity War” is scheduled for a May 4 2018. Or, for the geeky set, "Star Wars" Day.