Pirates of the Caribbean: Dead Men Tell No Tales

Isn’t it generous of the folks at Disney to bestow upon us, the humble ticket-buying public, another chance to contribute to star Johnny Depp’s wine-of-the-month club fund by launching a fifth voyage into the diminishing returns of its “Pirates of the Caribbean” franchise. And, by returns, I am not talking about the gazillions of gold doubloons collected at the box office—$3.7 billion worth worldwide to be exact.

Instead, it’s that sinking feeling that has been growing with each successive voyage into blockbuster overkill in the form of distracting 3-D gimmickry, eardrum-endangering sound, frantic action set pieces, CGI spectacle (warning: get ready for super-fake ghost sharks) and the debasement of such top-tier talents as Bill Nighy, Penelope Cruz, Ian McShane and, now, Javier Bardem that the studio needs to simply drop anchor and move on.

True, this is the most successful series of films based on a brand-name theme-park attraction—not exactly a matter of pride, however, given that neither 2002’s “The Country Bears” nor 2015’s “Tomorrowland” were deemed worthy of sequels by the House of Mouse. But what was amusing, clever and innovative in 2003’s original, “The Curse of the Black Pearl”—I always liked those pirates who were exposed as skeletons when struck by moonlight—now feels like "been there, plundered that."

This time, the subtitle—and there’s always a subtitle—is “Dead Men Tell No Tales.” I get a vicarious thrill whenever a film’s name is actually spoken out loud by a character and Bardem’s ghastly Captain Salazar—a zombie-fied rival of Depp’s perpetually soused swashbuckler Jack Sparrow whose re-awakened ghoulish Spanish crew is determined to slay every pirate on the high seas—doesn’t disappoint. As this leader of a gang of buccaneers in various degrees of decay explains in between the gushes of blood oozing from his mouth, he always leaves one survivor to pass along his legendary exploits. Why? “Dead men tell no tales.”

Norwegian directing team Joaquim Ronning and Espen Sandberg (“Kon-Tiki") as well as screenwriter Jeffrey D. Nathanson (“Catch Me If You Can”) appear to be addicted to chaos. They even crowd the IMAX-imized screen with no fewer than six schooners vying for the spotlight—which leads to an excess of captains, too. I half-expected that the Nina, the Pinta and the Santa Maria would make cameos. Instead, Paul McCartney—you know, the cute one—takes over token rock icon duty from Keith Richards as Sparrow’s  oddly cheery incarcerated uncle.

What else is new, you might ask? With Depp’s tipsy high-jinks at half-mast in the funny department these days—a running gag about the term “horologist” gets a real workout—two fresh and younger faces have been brought on board. Boy-band-bland Australian actor Brenton Thwaites is Henry, the grown son of Will Turner and Elizabeth Swann (Orlando Bloom and Keira Knightley, who return briefly after skipping out on No. 4). He eventually pairs up with Carina Smyth (Brit actress Kaya Scodelario of “The Maze Runner”), an orphaned self-taught astronomer whose smarts get her pegged as a witch. They partner with Sparrow in seeking Poseidon’s trident so Henry can break the curse that has exiled his father and eventually run into another old friend, Captain Hector Barbossa (Geoffrey Rush, who once again rises above the busy chases, sword fights and loud calamities simply by being subtle rather than obvious). That the newcomers don’t engage in a romance is as original as “Dead Men” gets.

Much of the two-hour-plus running time is eaten up by elaborate stunt-filled centerpieces. One has Sparrow repeatedly avoiding a guillotine’s blade by the narrowest of margins while Carina manages to avoid death by hanging. Another goes all Cecil B. DeMille with the parting of the ocean while the previously mentioned ghost sharks lack “Jaws”-like snap. Meanwhile, an ill-timed “I do” nearly gets an appalled Sparrow wed to a plump elderly widow with a massive case of scabies. At some point, he acquires a mischievous capuchin monkey.

The most ridiculous though satisfying sequence involves Sparrow’s entrance that could double as a metaphor for the entire movie. A new bank is being celebrated on the isle of Saint Martin and the ceremony revolves around a giant safe. Once opened, Jack is found inside taking a nap atop stacks of money as well as someone’s wife. He apparently was supposed to pull off a robbery and ends up accidentally stealing the entire building instead. Alas, once the pursuit runs its course, most of the riches have been emptied out onto the streets.

Those who go to see “Dead Men Don’t Tell Tales” might just recognize that hollow feeling as they leave the theater. 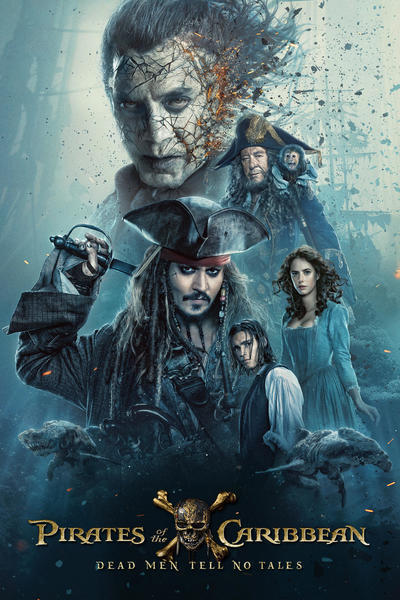 Pirates of the Caribbean: Dead Men Tell No Tales (2017)

Rated PG-13 for sequences of adventure violence, and some suggestive content.

Orlando Bloom as Will Turner