“Moana” would have been enormously entertaining regardless of when it came out, but its arrival at this particular moment in history gives it an added sense of significance—as well as inspiration.

The latest musical extravaganza from Walt Disney Animation Studios follows the adventures of a young woman who finds her own voice and forges her own identity. She chooses to be a forward-thinking leader of her people on her own terms, rather than a stereotypical princess in need of rescue, which the film acknowledges in amusingly knowing fashion. She has both the wisdom to respect her people’s traditions and the bravery to blaze her own trail toward the future.

Moana is on the verge of becoming the first female chief in the proud history of her Polynesian tribe, shattering the glass ceiling under spectacular blue skies. Imagine that.

Sure, you could go see “Moana” for its dazzling visuals, catchy tunes, enjoyable performances, clever running gags and overall sense of fun. It’s all there, and—except for a few scary moments—it’ll delight viewers of all ages. But for some of us older folks in the crowd, it’s hard to shake the feeling of wistful possibility in seeing a woman assume the leadership position for which she was destined.

It’s a must-see for girls and boys alike, though. And it features an astonishingly assured, auspicious debut from Auli’I Cravalho, a Hawaiian teenager showing chops and instincts well beyond her experience and years. In lending her voice to the title character, Cravalho radiates grace, great timing and an infectious energy. And the film from the veteran directing team of Ron Clements and John Musker (“The Little Mermaid,” “Aladdin”) and a small army of writers gives her plenty of opportunity to shine both individually and as part of a large, colorful cast of characters.

None is larger than Dwayne Johnson as the muscled demigod Maui, with whom Moana must team up to return a magical stone to its resting place and right an ancient wrong that’s steadily plagued the Pacific islands ever since—including, most pressingly, her home. Being one of the most charismatic people on the planet, Johnson charms with all the swagger you’d expect, and he’s also capable of toying with his tough-guy image as we’ve seen over the years. (A running bit in which Maui’s mass of tattoos comes to life to comment on the action—and mock him—provides a consistently funny Greek chorus.) But Johnson doesn’t get enough credit for his ability to connect with more intimate, dramatic moments, and “Moana” allows him to show off that side of his talent, too.

The two enjoy plenty of highs and lows as they set out on the open ocean, learning to work together to navigate various obstacles and outsmart their foes. (If you’re thinking about bringing very young children, a giant lava monster might seem frightening to them, but everything else is pretty darn delightful—including a pirate armada of evil coconuts who attack in a hilarious and thrilling sequence that’s straight out of “Mad Max: Fury Road.”)

“Hamilton” mastermind Lin-Manuel Miranda co-wrote several of the songs that help propel the action, including Moana’s girl-power anthem, “How Far I’ll Go,” and Maui’s bouncy introductory tune, “You’re Welcome.” The former speaks to her yearning to break free and explore beyond the island’s reef, something her father (Temuera Morrison) and mother (Nicole Scherzinger) have urged her not to do for fear of the dangers that may await. While it (mercifully) lacks the same persistent earworm qualities of the ubiquitous “Let It Go” from “Frozen,” its message of female assertiveness makes it infinitely more worthwhile. Another major highlight is “Shiny,” a campy little ditty sung by Jemaine Clement as a conniving crab with a taste for all things glittering and gold; it’s hard to ignore the modern-day political figure he calls to mind, too.

The details in these production numbers are just decadent; the colors are a million shades of green blue, and the underwater creatures and settings have a wonderfully immersive, tactile quality. Maybe the movie goes for the easy, physical gag a few times too many, as is the case with Moana’s animal pal, a kooky, cross-eyed chicken named Heihei (voiced by Alan Tudyk) who accidentally tags along when she dares to set out on the high seas.

But Moana—a strong, curvy girl and not your typical, stick-figure princess—is ready for any challenge that comes her way. Even a wacky sidekick. 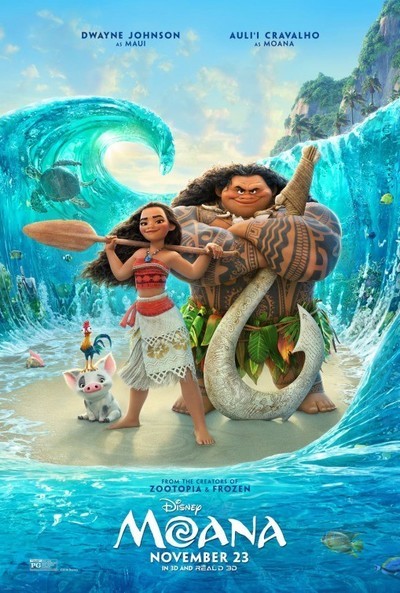