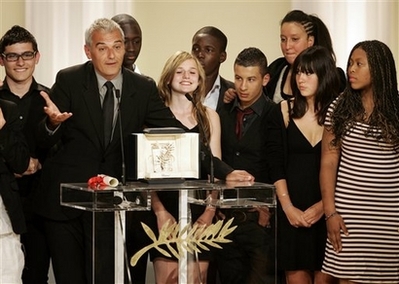 For the first time in 21 years, a French film has taken the top prize at the Cannes film festival, and in a rarity for Cannes, the Palme d’Or was awarded unanimously. The prize could have easily been named “The Golden Apple” rather than the The Golden Palm since it went to “The Class” ("Entre Les Murs"), the Laurent Cantet film about a young teacher who tries to reach his class of primarily immigrant children in a school on the outskirts of Paris. Confronted with their apathy and sometimes outright hostility, he questions them in a Socratic fashion until they begin to ask themselves if perhaps an education might be relevant to them. This film moved me to tears and so of course I thought that, in the grand tradition of Cannes, it had no chance of winning the top prize.

But the jury, led by Sean Penn, was very emotional and outspoken about it. When the director took to the stage with about twenty students from the film, Sean Penn, too, was moved to tears. Later, at the jury's press conference, he said the film was virtually seamless cinematically and exhibited the “art of film.” But more than that, he said, that it also was magic in its performances and touched the jury so deeply.

Similar sentiments were expressed by jury members Natalie Portman, Marjane Satrapi (the Iranian director of "Persepolis"), Alfonso Cuaron (the Mexican director of “Children of Men” and “Harry Potter and the Prisoner of Azkaban”), Sergio Castellitto (Italian actor and director currently appearing in "The Chronicles of Narnia: Prince Caspian") and Thai filmmaker, Apichatpong Weerasethakul (Cannes prize winner for “Blissfully Yours” and “Tropical Malady.”).

When I saw the film the other day it made me think about the twenty schoolchildren who have been killed in Chicago since the beginning of this year. The old saying is, if you want to send a message, use a telegram, not a movie. But perhaps Mayor Daley and the Board of Education can use the movie to start a dialogue with the grade school and high school students in our city. I’d like to start with my old high school on the West Side, Crane, where one student was gunned down right outside of the school. If it's shown there, it may be the first subtitled film some of the students have seen, but as Sean Penn accurately said, “This is high cinema you can share with a young audience.”

The Best Actor prize went to Benicio Del Toro for Steven Soderbergh's four-and-a-half hour film, "Che." The film received mixed reviews from critics but Del Toro was a strong presence onscreen for most of the running time. "Che" will be released as two movies, “The Argentine,” and “The Guerilla.” The Best Actress prize went to Brazilian actress, Sandra Corveloni, for her performance as a poor single mother trying to raise four sons in the slums of Brazil while she is pregnant with the fifth. That was in "Linha De Passe," by Walter Salles and Daniela Thomas; the title refers to a soccer term referring to trying to stay above the pass line. Director Daniela Thomas brought a gasp from the crowd when she announced, "the actress couldn’t be here because she was pregnant and has lost her baby.”

The Grand Prize went to Matteo Garrone's “Gomorra." an unsentimental look at the mafia in Italy. The Best Director award went to Nuri Bilge Ceylan, the Turkish director who is a favorite of Cannes, for his film "Three Monkeys.” The title refers to a family that seeks to cover up failings by not seeing, hearing or speaking the truth. The Jury Prize was won by a spirited fictional movie of a real politician, Giulio Andreotti, whose doings put the Godfather to shame. “Il Divo” was directed by Paolo Sorrentino.

And two Belgian directors and brothers who have become among my favorites at Cannes, Luc and Jean-Pierre Dardenne, won Best Screenplay for “Le Silence de Lorna” ("Lorna's Silence" (2009)). It is another of their desperate tales of working class people in Belgium, this time Albanian immigrants. This film has a wrenching performance by Jeremie Renier, who plays a drug addict trying to get clean. He’s in the movie for only about a third of it, but his performance affects every scene. His role was key when the Dardenne brothers won the Palme d’Or in 2006 for “L'Enfant” ("The Child"). In surprise tributes, two Special Jury Prizes were given for the body of work to Catherine Deneuve (whose film in this festival is the Arnaud Desplechin's “Conte De Noel” (“A Christmas Tale”), and Clint Eastwood, for “Changeling” and his strong history of filmmaking. I think that was a surprise to Eastwood, as neither he nor his representative was here to accept the prize. The festival buzz had him as a strong contender for the Palme d'Or.

America was well represented on stage by the presenters: Robert De Niro, who entered to a standing ovation and presented the Palme d’Or, and the other presenters Kerry Washington, Faye Dunaway and Dennis Hopper. Presented earlier at a separate ceremony was was an award given in the newly-renamed category of “The Knockout of 'Un Certain Regard',” which went to James Toback's “Tyson." The "Un Certain Regard" section of the festival showcases films the fest selectors admired, but perhaps not quite enough to qualify them for the official competition.