It's not exactly accurate to say that Agnès Varda is an underrated filmmaker. As the only female member of the French New Wave, she stands out. Additionally, her film "The Gleaners and I" is one of the most acclaimed documentaries ever made; it placed at #8 in a recent critics' poll conducted by "Sight and Sound" magazine compiling its participants' favorite docs. However, her films that don't fit into the French New Wave ("Cleo From 5 To 7," "Le Bonheur") or the documentary tradition ("Gleaners," "The Beaches of Agnes") have received much less attention. Part of the problem is that much of her work mixes fiction and nonfiction modes; while this may be hip at the moment, it was taboo for quite a while. The very existence of Eclipse's new box set "Agnès Varda in California" points to another issue. While she's mostly worked in France, she can't entirely be pinned down to one nationality. As her husband Jacques Demy completed the underrated "Model Shop" in 1969 Los Angeles, Varda made "Lions Love (…and Lies)". Fascinated by the counterculture, she would return to California after its demise. If memory serves, her L.A. films are never mentioned in Thom Andersen's "Los Angeles Plays Itself," but they're great examples of work that avoids the usual cliches about the city. The Hollywood sign is nowhere to be found in this box set. Varda's far more interested in Chicano muralists. 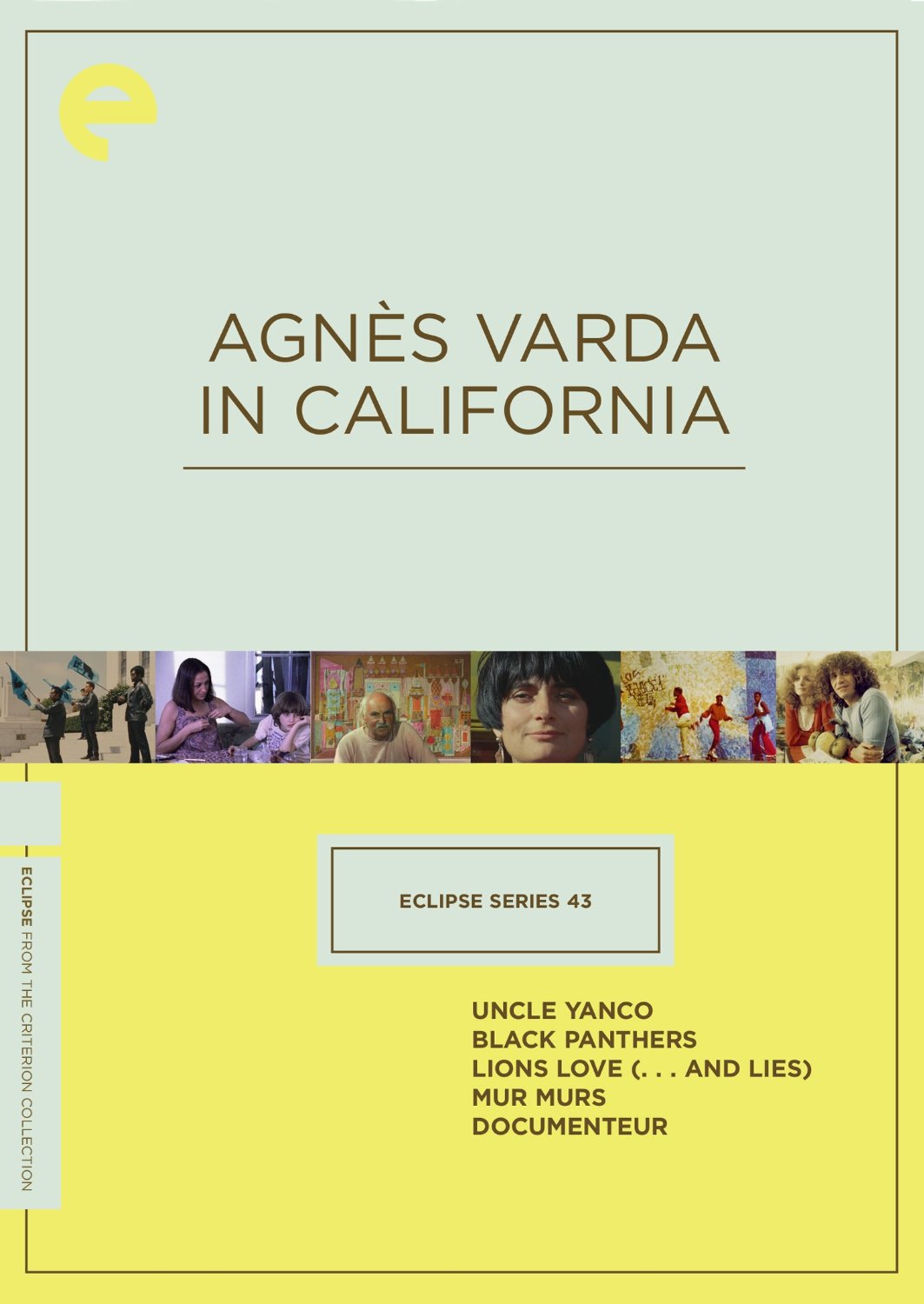 Eclipse has grouped together the shorts “Uncle Yanco” and “Black Panthers” on one DVD. In a certain way, the films, made in 1967 and 1968, depict various forms of counter-cultural activity in the Bay Area. But the tone of that activity couldn’t be more different. “Uncle Yanco,” centers around a long-lost relative of Varda’s, celebrating its subject’s vibrant paintings and laid-back lifestyle. The cinematography is as colorful as Yanco’s art. Although Yanco must be at least in his 60s, he invites much younger hippies to come out to his Sausalito houseboat and go sailing with him every Sunday. Jean Hamon’s montage is playful. Varda apparently had made “Uncle Yanco is great” buttons made, and she fills blank spaces in the frame with them. Yanco’s politics are anti-war but not exactly activist; he trusts that disengagement from conventional politics will eventually lead to change.

On the other hand, the Black Panthers were a lot more focused, to put it mildly. “Black Panthers” is centered around the 1968 Oakland demonstration to free then-imprisoned leader Huey Newton. It gives an introduction to the group, which took style—black leather jackets and berets, natural  haircuts—as a political statement. If their celebration of Mao and chants of “off the pigs” haven’t aged well, the continuing relevance of their view of the police as a hostile occupying force in minority communities is undeniable. Varda slips in hints of her work to come. She speaks with Kathleen Cleaver and interviews Newton about the important role played by female Panthers. By documenting radicals, Varda opened up new vistas in her future films: if the Panthers could rewrite American society’s rules about what it meant to be black, she could do the same about what it meant to be female, eventually leading to films like “One Sings, The Other Doesn’t” and “Vagabond.”

Varda seemed pretty sympathetic, if not actively enthusiastic, about the hippie counterculture in "Uncle Yanco." Two years later, when she made "Lions Love (…and Lies)", that seemed to have changed. The film centers on a trio of lazy hippies played by Viva and the two writers of "Hair," James Rado and Gerome Ragni. They don't seem to have any worries about money and spend their days idling about a L.A. house. Shirley Clarke, who plays herself, doesn't have such privilege. Her efforts to make a Hollywood film culminate in a suicide attempt, although Clarke is reluctant to stage the pill overdose and Varda steps in front of the camera to show her how it's done. In fact, Clarke is clearly playing a stand-in for Varda, whose reflection appears in a mirror in one scene. "Le Bonheur" is the Varda film that "Lions Love (…and Lies)" most resembles—both films have a surface bubbliness and underlying darkness. Viva, Jim and Gerry seem apolitical until the death of Robert Kennedy. The shooting of Andy Warhol also affects Viva, who was a Factory "superstar." The group's antics resemble those of the teenage girls in Vera Chytilova's "Daisies," but with all the brattiness intact and the feminist edge removed.

"Mur Murs," a 1980 documentary about murals in L.A., comes close to Les Blank's depictions of American subcultures. The artists profiled by Varda are white, African-American, Mexican-American, male and female, but she seems most fascinated by the city's Latino subculture. She even takes time out for a performance by a Chicano punk band, Los Illegals. This may have the most densely worked soundtrack of any Varda film; while the director delivers a voice-over, a male voice offers counterpoint in a whispery tone, sometimes translating her words into Spanish. The murals are a varied lot, ranging from expression of radical politics to pure surrealism to decorations for schools to ads for businesses. Varda relishes their non-commercial nature, something all the artists she interviews value. For various reasons, they don't think they'd fit into the conventional gallery scene, and they're happy to swap the chance to get paid much (or at all) for the opportunity to reach a wide audience of everyday people. One can see parallels with Varda's filmmaking practice, particularly her tendency to alternate between films aimed at a relatively wide audience (like "One Sings, The Other Doesn't" and "Vagabond") and more arcane projects. In some respects, "Mur Murs" picks up where "Black Panthers" left off, showing the traces of African-American and Latino leftist  politics that were still hanging on in 1980. In that regard, it's a more optimistic film than one might expect.

“Documenteur” closes the box set, but it also sums up the films that came before it. The title is an untranslatable pun—“menteur” is French for “liar”—but it’s subtitled “an emotion picture.” The tone is rather cool, though. “Documenteur” follows a French mother, Emilie Cooper (Sabine Mamou, who edited "Mur Murs"), and her young son Martin (played by Varda’s son Mathieu Demy) through L.A. It’s not a tourist’s view of the city, although Emilie does briefly get involved in the film industry. In fact, the Los Angeles shown in “Documenteur” bears some resemblance to the fishing village of Varda’s first feature, “La Pointe Courte.” As the title suggests, the film mixes documentary and fiction: Emilie and Martin get involved in real-life situations, such as a performance by a mariachi band in the film’s final scene. Emilie works as typist, sitting at a desk facing the beach. The DVD preserves the cinematography’s grain and gritty look, enhanced by the fact that Varda and cameraman Nurith Aviv so often shot through windows. Delphine Seyrig’s narration creates a distancing effect, as she spends the first ten minutes musing on language before the film really introduces us to the Coopers’ lives. What’s most surprising about its depiction of L.A. now is how safe the city seems and how Emilie trusts Martin to run around on his own. After films like “Nightcrawler” have depicted it as a sprawling hellscape, the gentle alienation of “Documenteur” seems almost utopian. This city has vanished, from films and TV shows about L.A. if not from reality. Thanks to "Agnès Varda in California," it remains preserved, however.