Dan Gilroy's thriller "Nightcrawler" is about an amateur cameraman who parlays his eye and his nerve into a successful small business, deceiving, manipulating and exploiting everyone who stands in his way. Shot by Paul Thomas Anderson's regular cinematographer Robert Elswit through what could be a Night Vision Rot filter, it's a film about how sociopaths get over on everyone else, and a portrait of a disturbed, marginal loner that would fit perfectly on a double bill with "Taxi Driver" and "Henry: Portrait of a Serial Killer." It's also a media satire in the spirit of "Network" and "To Die For" that takes the slogan "If it bleeds, it leads" to its horrifyingly logical conclusion. It's a comedy.

The movie's hero, Lou Bloom (Jake Gyllenhaal), is a man living on the fringes. He's first seen trying to cut through a chain-link fence to steal scrap that he can sell for pocket money. While driving late at night, he happens upon cameramen filming a car wreck. He asks the lead cameraman (Bill Paxton) what TV station they work for, and learns that they're freelancers who monitor police radios, chase down wrecks and fires and homicides, and sell their video footage to the highest bidder. The rates aren't great, but they're better than what Lou is used to, so he buys a camera and gets in on the action.

This leads him to a local station whose news director, Nina Romina (Rene Russo), has been up and down the dial, as a certain sitcom's theme song once sang, and needs to raise her newscast out of last place to keep from getting fired. Any idealism she had was ground out of her years ago; only desperation remains, and she speaks frankly to Lou from the moment she meets him, sensing a kindred spirit. (She has no idea how kindred: soon enough he'll cajole, pressure and even scare her into unleashing her own inner Lou.) Nina tells him to avoid covering crime in poor or nonwhite neighborhoods because nobody cares about it; the sexiest crime stories are ones involving affluent white folks. At one point she flat-out tells Lou that the newscast's aesthetic could be boiled down the the image of "a screaming woman running down the street with her throat cut."  The newscasters' warning "These are extremely graphic images" is not, of course, a warning; it's a come-on.

Sensing a golden opportunity, Lou feeds Nina footage that's more artless than the stuff offered by other local crews, but much bloodier. It starts with shots of a domestic killing that he obtained by sneaking past crime tape and wandering around inside the gore-strewn house (blurred by Nina's technicians, but only because they're required to blur it) and escalates, to the point where Lou is subtly goosing circumstances in order to produce more violence and chaos which he can then tape and sell. Lou and his easily cowed assistant, Rick (Riz Ahmed), breach barriers they aren't supposed to breach, and get close enough to police investigators and firefighters and EMT's that they break their concentration and sometimes interfere with their work, but their literally in-your-face footage sets them apart from teams that film from a discreet distance, with a zoom lens.

Lou is also a sick person who, on first glance, might strike you as a reasonable, personable guy. He talks like a Tom Cruise go-getter from a 1980s hit—a comparison furthered by certain filmmaking choices, such as the "inspirational" montages of Lou hustling toward success while James Newton Howard's triumphant retro synth-pop pounds in our eardrums. The hero gets a number of Stick-it-to-the-Man applause lines, the best of which is a kiss-off to a rival who has figured out that Lou is for real and wants to co-opt him rather than compete with him. "I feel like grabbing you by the ears right now and screaming, 'I'm not fucking interested,'" Lou tells him, in the sort of tone one might reserve for, "What are your store hours?" or "I'll have a mushroom omelet, cooked with very little butter."

But it would be a mistake to suggest that "Nightcrawler" is told from Lou's point-of-view, much less that it endorses his behavior. It's too attuned to the anxiety and misery of the people he manipulates to validate such a reading. But it does put a subtle editorial frame around Lou's odyssey.  "Nightcrawler" is the blackly comedic, Neo-noir, night-people thriller that I wanted the Travis-Bickle-as-Superman fantasy "Drive" to be. Like "Drive," it could be described as the best picture Michael Mann never made: a film about a private, ruthless loner who pursues his dream his way, always, and whose path through the world is marked by the bloodstains of the people he's rolled over.

This is a classic film, not just because every scene and line is casually beautiful and devoid of extraneous touches, but because its tone is mercilessly exact. Gilroy, a first-time feature director who has written or cowritten many movies, including "The Bourne Supremacy," knows what he wants to say, and how to say it. He maintains just the right amount of distance from Lou, so that we get a buzz from his audacity while finding him revolting. We're not so much looking down on Lou as peering into an abyss that exists, to some degree, within everyone: the lightless home of that little voice that whispers, "You've just gotta do what makes you happy," and "It is easier to ask forgiveness than permission."

There's a lively satirical aspect, and it's not confined to TV news or journalism in general, or even the modern, social media-driven culture of continuous surveillance and voyeurism. The entire film is, among other things, an attempt to treat certain American myths straightforwardly, within the context of a somewhat realistic drama, the better to pursue them to their bitter conclusion. It's warning against being fooled (in life) by people who remind us of can-do-All-American-hotshot heroes in fiction: incarnations of apple pie capitalism who see what they want (fame, money, a job, a mate), and go after it, and refuse to take no for an answer, even if the "no" is delivered through tears.

That tabloid journalism rewards the shameless doesn't count as a breaking news flash, but "Nightcrawler" is not interested in stoking our outrage over what we already know. It's using TV news as a means to an end—to show how a man who presents as "normal," even "likable" and "motivated" and "capable," can be evil, and seduce us into being evil, too. Lou's inspirational aphorisms are chillingly funny once you realize they're devoid of generosity and decency, and that he sees other people only as possessions, allies or obstructions: "I believe that good things come to those who work their asses off." "Television news might be something I love as well as something I'm good at." Primitive cultures believe a photograph can steal a soul. This man is a master thief. 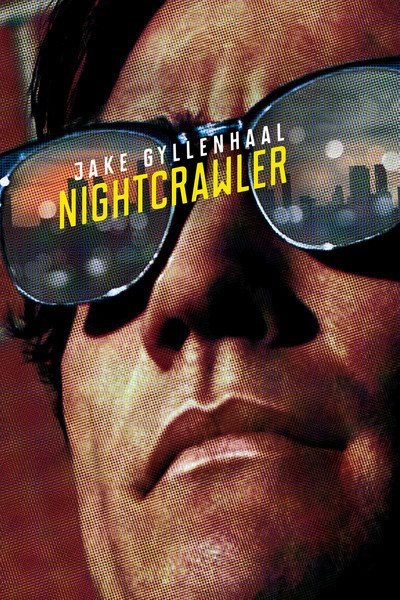 Rated R for violence including graphic images, and for language