What is hidden in Caché?

In his recent Great Movies review of Michael Haneke's "Caché," Roger Ebert writes of a shot he believes may hold the key to the film's mystery:

How is it possible to watch a thriller intently two times and completely miss a smoking gun that's in full view? Yet I did. Only on my third trip through Michael Haneke's "Cache" did I consciously observe a shot which forced me to redefine the film. I was not alone. I haven't read all of the reviews of the film, but after seeing that shot I looked up a lot of them, and the shot is never referred to. For that matter, no one seems to point to a conclusion that it might suggest....

No, he's not talking about the final shot: "You will find it on the DVD, centering around 20:39," he says. "You tell me what it means. It's the smoking gun, but did it shoot anybody?"

Roger followed up with a blog post about the shot (which you don't want to know about if you haven't already seen the movie) and I offered a couple of comments: here and a follow-up here. Many interesting takes on the film can be found in these comments, which (as I write this) number more than 130. Critic Michael Mirasol, whom Roger quotes, thinks the stationary shot (#2 below, a reverse-angle of the film's opening shot, from Georges and Anne's bedroom, toward the street where the video camera is concealed) is from Pierrot's POV, and provides evidence that links him to the mysterious "Lost Highway"-esque surveillance videos. I don't see it that way, but here are the four shots in question (images from moving shots indicated with arrows): 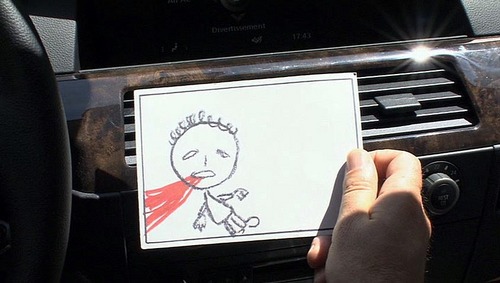 The postcard to Georges that Pierrot gives him in the car.

Long, stationary shot from bedroom window, looking down at the street from which the movie's opening shot (top) was taken. Faint breathing, rustling heard on the soundtrack. This reverse-establishing shot serves as a necessary set-up for the double-shock of the next shot, another reminder not to take for granted what we think we see...