The Haneke MacGuffin: What is the mystery?

"It's important to always try to tell a story in a way where there are several credible possible explanations. Explanations that can be totally contradictory!"-- Michael Haneke

(This is a follow-up to a previous post: What is hidden in Caché?)

Andrew O'Hehir at Salon.com asks Michael Haneke about the surface mysteries -- the MacGuffins, as I like to think of them -- in "Caché" and "The White Ribbon":

AO:You spoke earlier about using the black-and-white photography and the narration as a distancing mechanism, a way to remind the viewer that the film is an artifact. There's another sense in which you are challenging the audience. As you did in "Caché," you lead us part of the way toward a solution of the central mystery: Who is committing these violent acts, and why? And then you seem to suggest that solving the mystery is not actually important.

MH: Those are the least important questions. In my previous film, "Caché," the question of who sent the videotapes isn't important at all. What's important is the sense of guilt felt by the character played by Daniel Auteuil in the film. But these superficial questions are the glue that holds the spectator in place, and they allow me to raise underlying questions that they have to grapple with. It's relatively unimportant who sent the tapes, but by engaging with that the viewer must engage questions that are far less banal.

There are so many different things that take place in "The White Ribbon" that there are any number of possible explanations. It may not be that the acts have been committed by someone intentionally. For example, when the barn burns down, it's possible that was simply caused by an accidental spark. Perhaps the hay had been stored when it was too wet, and spontaneous combustion happened. Perhaps the farmer's wife who died simply fell. It was an accident, and she was not murdered. The explanations, in fact, are so unimportant. In real life, there are any number of events that take place that we don't understand. It's only in mainstream cinema that films explain everything, and claim to have answers for anything that happens. In reality, we know so little about what happens. It's far more productive for me to confront the audience with a complex reality that mirrors the contradictory nature of human experience. 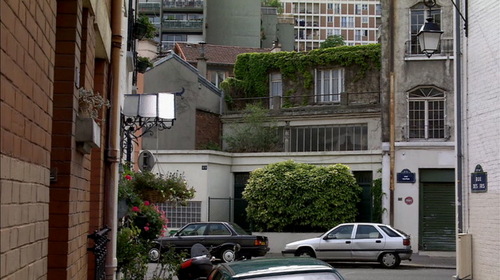 There are open-ended films and there are closed ones, and Haneke prefers the former. He wants the audience to actively participate in watching and interpreting the film -- and to be conscious that they are doing so. Both "Caché" and "The White Ribbon" are explicitly about (as I like to say) what goes through your head while you watch them. We humans like to tie together cause and effect, to affix blame (even for natural phenomena like, say, earthquakes). Scapegoating is one of the ways we comfort ourselves with the illusion of explanations. If we can find someone to blame, it makes us feel that we are somewhat in control, that things happen for reasons we can understand (usually because someone else is actively doing "evil").

AO:It strikes me that in "Caché," and perhaps in this film as well, there literally is no answer that explains what is happening.

MH: [In English.] There could be an answer!

AO: Well, we can point back at you, the director of the film. Who is making those videotapes and sending them to the family? You are!

[Laughter.] Every interpretation is right.

[In German.] I always say that a film is like a ski jump. The film constructs the jump and enables the spectator to jump. It's up to each member of the audience to jump, and they're all going to jump differently. I create tension. I raise certain questions. That's my intention, but it's to give the audience a chance to respond.

[In English.] The film ends in the head of the viewer, not on the screen.

AO: On the simplest level, you want to leave us asking: What happens next? What will the events we have seen lead to, and how do we think about them?

MH: [In English.] Yes, and why? Why do things happen like this? Everybody has to find his own explanation.

And your explanations (see The Funny Games Experiment) should tell you as much about how your own mind works as they do about how the film works.

Is this a cop-out on Haneke's part? That's one explanation. And even if there's some truth to it, the careful construction of the films suggests it's not the whole truth: "Caché" encourages you (requires you) to engage with what you're seeing and question it shot by shot. And "The White Ribbon" (which I've only seen once) is less didactic and more dialectical than its critics give it credit for: The less they notice, the more simplistic the interpretations...

UPDATE (01/23/10): From another good interview with Haneke with Sam Adams at The Onion A.V. Club:

MH: I always seek to mobilize, to call on the imagination of the spectator. It's well-known that the images that are created by one's imagination are far stronger than any that I can show. In fact, it's an error, a widespread error in mainstream cinema, to always want to show things and to depict things. Because as you say, we're overwhelmed by it, because there are so many of these images, and in fact we become inured to it through overuse. It seems ridiculous. To me, it's far more efficient to mobilize the imagination. It's far more efficient to hear a creaking step, for example, than to see the face of a monster, which usually looks ridiculous, and where you know that the blood is ketchup.

MH: First of all, in real life, we don't know--there's so much that we don't understand. If someone's lying to us, then it's rare that we know that they're lying to us. It's only in bad films that you recognize immediately that an actor's playing in such a way that you can see that he's lying, and that's simply dumb. But to reach that, it requires that you make a film in such a way that a spectator feels compelled to find his own explanation. You want to lead the spectator to find his own interpretation. To ask questions rather than provide all of the answers. Doing that leads to open endings and open dramaturgy.