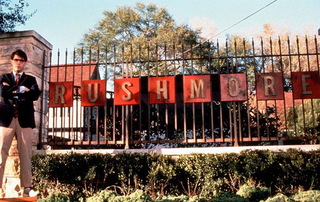 Those who doubt how thoroughly the sensibilities of the French New Wave have been absorbed into the work of today's filmmakers (see discussion of the recently posted Opening Shot for Truffaut's "The 400 Blows") should check out Matt Zoller Seitz's series of video exploring the "scavenger-hunt" sensibility of Wes Anderson, "The Substance of Style," at Moving Image Source. Part 1 (of five) has been posted, with the rest to follow over the first week in April.

Matt -- as writer, editor and narrator -- not only compares images that Anderson has lovingly quoted and reinterpreted from the works of François Truffaut, Orson Welles and Charles Schultz (and Bill Melendez, director of the Peanuts television specials), but teases out subtler influences at play in Anderson's work -- his features ("Bottle Rocket," "Rushmore," "The Royal Tenenbaums," "The Life Aquatic with Steve Zissou," "The Darjeeling Limited"), shorts and commercials, including his famous American Express ad based on the Opening Shot of Truffaut's "Day for Night." (Coming in Part 2: Martin Scorsese, Richard Lester and Mike Nichols.) Says Matt:

Anderson draws much inspiration from French New Wave filmmakers, including Jean-Luc Godard, a clear influence on his cutting, and Louis Malle, whose "Murmur of the Heart" heavily influenced the tone of all his films. But towering over the rest is François Truffaut, an impresario in the Welles tradition, but a warmer and more earthbound auteur.

There's a Peanuts connection here too. Truffaut's autobiographical Antoine Doinel series maps the internal terrain where childhood and maturity meet, clash, and coexist. Anderson pays tribute to Truffaut by quoting shots directly, but reversing their screen direction. Think of the lateral tracking shot through the classroom in "The 400 Blows" mirrored in the first scene of "Rushmore," and from that same Truffaut film, the shot of Antoine in a chain-link cage, an image repeated in the penultimate shot of "Bottle Rocket."

The goal of the series is to juxtapose...

... Anderson's cultural influences against his films onscreen, the better to show how he integrates a staggeringly diverse array of source material into a recognizable, and widely imitated, whole. It will examine some, but certainly not all, of Anderson's evident inspirations. Along the way, it may incidentally illuminate why Anderson-esque movies--from "Garden State" to "Son of Rambow" -- can seem, no matter what their virtues or pleasures, a weak substitute for the real thing.

Anderson's scavenger-hunt aesthetic stands him in good company, alongside Quentin Tarantino, David Gordon Green, James Gray, and the other Anderson, P.T. But what makes Wes Anderson distinctive is the sheer range of art that has fed his imagination -- not just recent American and foreign films, but films from 30, 50, even 70 years ago, plus newspaper comics, illustrations, and fiction. The spectrum of influence gives his work a diversity of tone that his imitators typically lack. It is a style of substance.

Watch for the cheeseburger phone.