Uncle Boonmee who recalls me to my present life

Facing the jungle, the hills and vales, my past lives as an animal and other beings rise up before me. -- inscription at the head of "Uncle Boonmee Who Can Recall His Past Lives"

I am head-over-heels in love with "Uncle Boonmee."

Apichatpong "Joe" Weerasethakul's "Uncle Boonmee Who Can Recall His Past Lives" is the kind of movie that big screens (theatrical and HD) and Blu-ray were made for. I can't think of cinematic worlds more "immersive" (in current 3D parlance) than Apichatpong's last three features, "Tropical Malady" (2004), "Syndromes and a Century" (2006) and "Uncle Boonmee" (2010) -- all of which I have only recently encountered. (They're all on DVD, and "Uncle Boonmee" is now opening in U.S. theaters and is available on Region 2 Blu-ray.)¹

Talk about blissful: Apichatpong's pictures (say that five times real fast) are awake and alive to the joy of existence like few others I've seen. Sorry if that sounds too, you know, giddily "life-affirming," but I feel like Joe's movies sharpen and expand my senses while I'm watching them -- not unlike the peak experiences/memories I've had in the garden, or walking in the woods with my dogs, when I feel I'm living more intensely, soaking up more of the life within and around me. And in the case of these movies, there's the added thrill of Joe framing it all! What can I say? Apichatpong movies make me very happy. (They're really funny, too.)

Few other films or filmmakers have stirred this kind of awe-mixed-with-happiness in me. Seeing "2001: A Space Odyssey" at age 11 was the first time I can recall. (Joe's last three films have reminded me of various sections of that movie, in which you feel you're experiencing something both primally human and alien at the same time.) Wim Wenders' "Kings of the Road" also explores what I called, upon first seeing it in the late 1970s, "the strange familiarity of unfamiliar places" -- that feeling of entering a/the world that's both new and intimately recognizable, uncanny and ordinary. I get it from the Coens sometimes -- in "No Country for Old Men" and "A Serious Man," especially -- and Terence Malick ("Days of Heaven," "The New World") taps into it occasionally, too. It has something to do with the light, the air, the shapes, the sounds, the extraordinary mythology of the everyday seen with new eyes (yours, through Joe's). 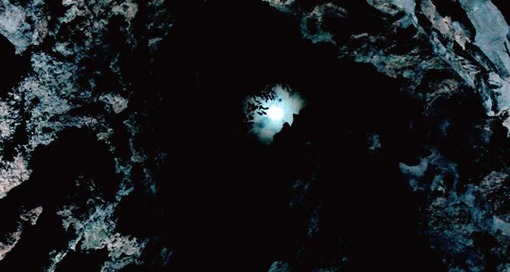 I read somewhere that Joe likes to read critical interpretations of his movies, because Thai criticism offers little more than descriptions. (He's not very well-known at home.) The thing is, his movies are as challenging to describe as they are to interpret. They're bursting with ideas and associations (in some ways I think of them, structurally, like the endlessly zoomable fractal images in that famous 1995 Arthur C. Clarke PBS documentary about the Mandelbrot Set, "Colors of Infinity")... but maybe our best attempts to subjectively explain how they look and feel is all the interpretation they require. 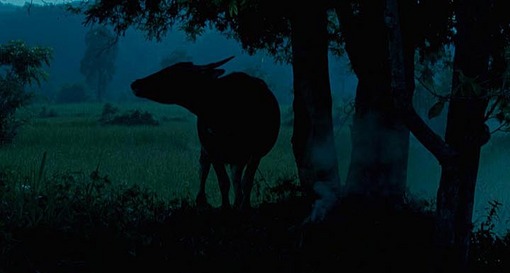 "Uncle Boonmee" starts with a black bovid tied to a tree at night (or deep-blue day-for-night). I was in love with the film before the end of this almost-wordless (but for the call, "Keow!") opening. The close ups and vocalizations of the animal are enchanting enough, but by the time s-he pulls free and runs across a field of tall grass toward the jungle, I was in heaven. Why? Well, because of the beauty of the movement (something in the way s-he moves...) and the nightsounds and the color and the composition. Later a character who should know says that "Heaven is overrated." Watching and listening to this movie -- for all its bugs and pests and sorrows and ailments, accompanied by unimagined wonders -- you tend to believe her. (She indirectly confirms David Byrne's assessment that it is a place where nothing ever happens. Here, by the edge of the jungle, everything is always happening.) 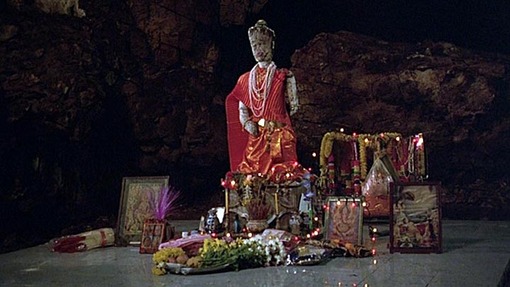 There are visual and aural effects in Apichatpong's movies -- some of them are natural landscapes, but also actual post-production work -- that (as I said after I first visited Pandora) make the vaunted blue-cheese world of "Avatar" look like a kitschy fiber-optic lamp in a strip-mall Thai restaurant. This is especially funny because Joe frequently evokes that whimsically plastic aspect of Thai popular culture in his films: the flashy temple lights and karaoke restaurant in "Uncle Boonmee," or the cave shrine that plays a Christmas carol in "Tropical Malady." The most awesome images in Joe's films are so deceptively simple they seem utterly natural: a tree alight with fireflies, the ghost of an animal rising from its body and entering the jungle, the confrontation between a man and a tiger, a solar eclipse, a piece of ductwork that inhales fog, red-eyed humanoids in the dense foliage, star-fields on the interior walls of a cave... 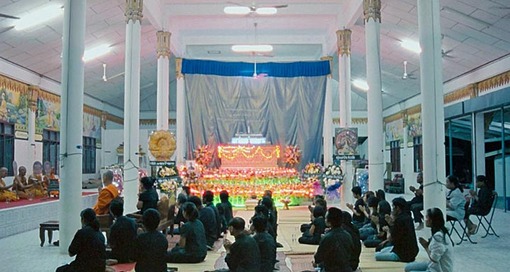 Ghosts appear, in one form or another, throughout these films -- quite strikingly during one memorable evening in "Uncle Boonmee" -- but they seem more an extension of the known world than an intrusion of the supernatural, as in some Western and Far Eastern ghost stories. Joe has expressed his affection for traditional Thai horror movies, and although I've never seen one, I wonder if they're more about the frisson than the "Boo!" (He says they are usually funny, also.)

But back to the "interpretation" stuff: Uncle Boonmee does not recall his past lives for us. The film itself does, but not by announcing "flashbacks." The lives simply appear, as in the opening, or a scene by a waterfall (think of those framed and lighted waterfall motion scenes) with a princess and a catfish. We aren't led into these recollections, if that's what they are (and, by the way, would Uncle Boonmee be the cow or the man, the catfish or the princess?); they are just part of the tapestry of the film, as are ghost-memories of certain Boonmee relatives. When Joe speaks in interviews (and the commentary track for "Tropical Malady") of his diaristic desire to make movies that chronicle his personal memories, his use of the word "memories" seems to include fantasy and imagination and dreams -- which are also the stuff memories are made of. (In an essay called "Ghosts in the Darkness," he quotes Gabriel Garcia Marquez on the subject of art that grows from "our desire to remember": "The memory is clear but there is no possibility that it is true." That's a resonant summation of the Apichatpong sensibility.) 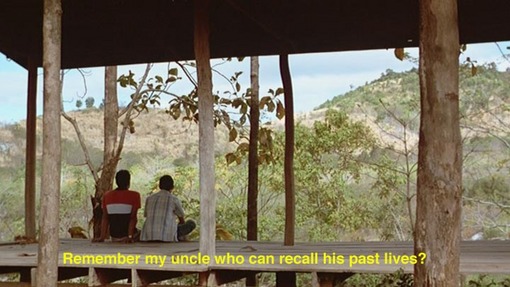 Joe likes to weave his memories -- and past movies -- together in ways that are more oblique than, say, Kiarostami, who has made films that are explicitly about (or based upon) the making of his past films (as in the "Koker Trilogy"). Except for the quasi-doc "Mysterious Object at Noon," none of Joe's features offers a version of the director playing himself or a character based on him. Instead, the films are linked by recurring actors and characters and incidents. Tommy, the motorcycle-rider of "Blissfully Yours," is disposed of off-screen (with a sound) and shows up as a corpse (with the same underwear) at the beginning of "Tropical Malady." Tong (Sakda Kaewbuadee), the lover/tiger of "Tropical Malady," reappears in as a Buddhist monk (with a different name) in "Syndromes," and again at the tamarind ranch as Uncle Boonmee's nephew named Tong, who later becomes a monk. Pa Jane (Jenjira Pongpas), who has one leg shorter than the other, reappears as Aunt Jen in "Uncle Boonmee." And might the cave that Keng is afraid to explore with Tong in "Tropical Malady" be an antechamber of the womblike one Uncle Boonmee visits with his dead wife Huay, Aunt Jen and Tong? Joe has said he weaves these connections into his movies because they are personally important to him. He sees the films themselves as intertwined memories.

So many of my favorite films tend to be movies that are, on some level(s), about the process of memory: "Sansho the Bailiff," "The Magnificent Ambersons," "Letter From an Unknown Woman," "No Country for Old Men," "Vertigo," "Days of Heaven," "Our Hospitality," "Cutter's Way," "That Obscure Object of Desire," "The Life and Death of Colonel Blimp," "Housekeeping," "Mad Max 2: The Road Warrior," "L'Eclisse," "The Private Life of Sherlock Holmes," "Sunset Boulevard," "Once Upon a Time in the West," "Once Upon a Time in America," "The Singing Detective" (Jon Amiel), "Last Year at Marienbad"... "Tropical Malady," "Syndromes and a Century" and "Uncle Boonmee Who Can Recall His Past Lives" now join their company.

There I go again. OK, how do I interpret "Uncle Boonmee" -- and is that something I really want to do (or should do)? Well, I can start by saying that the movie is not bifurcated like "Blissfully Yours" (city/country), "Tropical Malady" (city/jungle, romantic comedy/mythic journey) or "Syndromes and a Century (rural/urban), in which the second part transforms and recapitulates aspects of the first. "Uncle Boonmee" is fairly linear, occasionally looping back into other stories from (we assume) Boonmee's past, or perhaps a ghost or a spirit or a creature with a tale to tell. 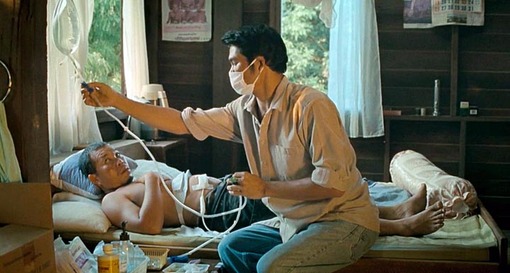 Above: Watching the play of the light -- out the windows, through the curtains, and inside the room itself, sunlight glowing on the shirt of the medical assistant....

Uncle Boonmee is slowly dying of renal failure, and ghosts from his past seem to be coming back to help him tie up loose ends and make the transition to the next realm. He puts his affairs in order, considers the future in this world after he's no longer around, and watches as his past lives rise up before him. That's about it. The jungle is death and the jungle is alive (like the woods in "Twin Peaks," though less overtly sinister). Life evolves and we watch it go through its changes even while we're in the middle of it, passing through it, on our way out of it.

Some kind of displacement -- physical, spiritual, psychological -- is happening in several of the characters, who sometimes behave as though they're watching themselves from outside their own bodies. Nobody is terribly perturbed to encounter dead relatives or Spirit Monkeys or flirtatious catfish. And why should they be? Similar material about the divided nature of consciousness in the hands of, say, David Lynch would be nightmarish and fraught with horror ("Lost Highway," "Mulholland Dr.," "Inland Empire"). Joe, on the other hand, emphasizes the continuities rather than the divisions and regards it all with a sense of wonder, more amused than bemused.

¹ "Mysterious Object at Noon" (2000), an Exquisite Corpse-inspired experiment, and "Blissfully Yours" (2002) are also mesmerizing in different ways. 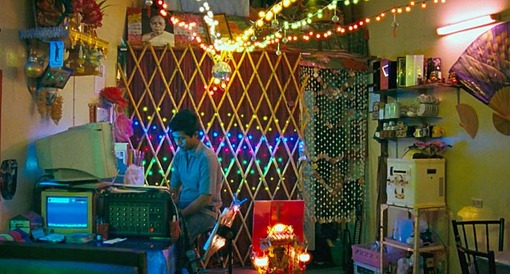 UPDATE (04/25/11): I was dismayed that nobody cared to share my love for "Uncle Boonmee" in comments. Tonight I learned that, for reasons unknown, this entry has not been accepting them. And they weren't in the spam filter, either. So, I've asked the Sun-Times tech folks to see if they can fix it. If you tried to post before, please try again. Uncle Boonmee needs you...