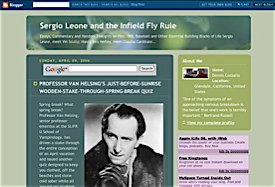 The Van Helsing Quiz at Sergio Leone and the Infield Fly Rule.

Some of you thought my "101 102 Movies You Must See Before You Die" list was a little too, well, rigorous. I still think it only covers the basics of what you need to have seen (and appreciated) in order to hold your own in intelligent conversations about movies these days. Maybe that makes me (shudder) an "elitist." Ahem. I think it just means I have standards.

But whether you find my list off-putting or not, you may enjoy "The Van Helsing Quiz" over at one of my favorite personal movie blogs, Sergio Leone and the Infield Fly Rule, which you will also find in my permanent list of favored links in the column at right.

Owner/proprietor Dennis Cozzalio posted the quiz itself back in April. There, you can see it in its un-filled form. But a month later, Cozzalio himself submitted to the quiz, and his answers are even more entertaining and provocative than the naked quiz.

I was oddly delighted (when I'm delighted, it's usually odd) by Cozzalio's responses to most of the 25 questions -- so much so that I felt somewhat relieved of the burden of having have to take it myself. (Too many things to weigh and remember; no wonder it took him a month to post his answers!) And even when our answers would not be similar or identical, I enjoyed reading what he has to say -- which is how I feel about any critic I like. A few samples:

1) What film made you angry, either while watching it or in thinking about it afterward? Cozzalio's choice: "Mississippi Burning" (directed by the worst filmmaker on the planet, Alan Parker). I couldn't agree more! (Though the very similarly hypocritical, sanctimonious, humorless and utterly wrong-headed "Natural Born Killers" would vie for the dishonor on my answer sheet.) Writes Cozzalio: "The movie is full of the usual Parker grotesqueries—lots of lovingly shot lynchings and shootings and beatings to linger over, all in the name of peace, love and understanding, slobbering redneck villains and saintly Negro victims (no African-American is allowed to live and breathe as a character in this movie), and the total disregard for anything, like consistency or believability of character, that doesn’t add up to an immediate, bludgeoning effect. "Mississippi Burning" purports to be about the evil results of hate, and in the end I ended up hating Alan Parker."

(This reminds me: Sometime I'll have to tell you about the night I nearly strangled the evil Alan Parker in the lobby of the Cinerama Dome in Hollywood -- moments after the all-media screening of "Mississippi Burning." That's how much the film enraged me.)

8. Barbara Stanwyck or Ida Lupino? A bit unfair, considering that Stanwyck is the greatest actress in the history of movies. But Stanwyck it is. (See my shrine to Babs here.)

11. Favorite Robert Altman movie? OK, maybe "Nashville" is too easy an answer -- but Cozzalio's got the right runners-up: "The Long Goodbye," "California Split." His competing choice of "Buffalo Bill, or Sitting Bull's History Lesson" bewilders (and intrigues) me. I also love "McCabe and Mrs. Miller" -- and have a soft spot for some of Altman's less acclaimed, oddball works like "3 Women" and "Images" and "Secret Honor."

17. Robert Ryan or Richard Widmark? Close, but Ryan by a nose.

21. Jeff Bridges or Jeff Goldblum? OK, the latter definitely has "Nashville" and Cronenberg's "The Fly" to his undying glory. But, let's face it, Bridges has had the finest career of any actor of his generation. Perhaps only Jack Nicholson and Robert De Niro (both slightly older) can even come close to this range of amazing performances in so many indelible films: "Fat City," "Bad Company" (1972), "The Last Picture Show" (1971), "Rancho Deluxe," "Stay Hungry," "Hearts of West," "Winter Kills" (rent it -- NOW), "Heaven's Gate," "Cutter's Way," "Starman," "Tucker: The Man and His Dream," "The Fisher King," "The Fabulous Baker Boys," "American Heart," "Fearless," "The Big Lebowski," "The Door in the Floor"...

24. Grace Kelly or Ava Gardner? Here's where I would disagree with Cozzalio. Sure, Kelly was in better movies (heck, she's got three Hitchocks, opposite James Stewart, Ray Milland and Cary Grant: "Rear Window," "Dial M for Murder" and "To Catch a Thief"). Gardner's movies were comparably disappointing -- mainly because you felt she was so much better than they were. No movie could ever contain her. But as I recall (and it's been a long time) Gardner wiped the screen with Kelly in John Ford's "Mogambo" (Gardner: "Look, Buster, don't you get overstimulated with me!"). I'll take the Lusty Earth Goddess over the Prim Icy Blonde any day. (Just as I'll take the sweaty "Night of the Iguana" over the cardboard "High Noon" any time, any place.)

Now, go take the thing yourself.