That was the fest that was 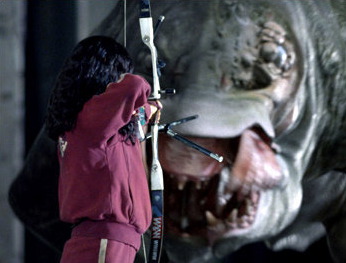 "The Host": It all depends on how you look at it.

I kinda wish I'd had girish's Toronto. I saw some great stuff -- "Pan's Labyrinth" and "The Pervert's Guide to Cinema" being my favorites, and was also impressed with "Volver," "Shortbus," "The Wind That Shakes the Barley" and a few others. Not bad, but (as I wrote earlier) not as overwhelming as last year. I steered away from most of the big commercial titles (except for "Borat"!) and concentrated on some of the high-profile foreign and "specialty" films, including some that had attracted attention at Cannes. In other words, titles I thought readers of Scanners would be particularly interested in.

Girish, on the other hand, followed his bliss and... well, here's his assessment of his Own Private Toronto:

Of the eight TIFFs I’ve attended, I think this year’s was probably the strongest. Unlike last year, I took my laptop with me and fully expected to blog the fest, but it turned out that many of the films I saw were not so casually bloggable. I’m still trying to figure out how to think about many of them.

I had most of those on my "want to see" list, but they got bumped by other screenings or time I spent blogging from the fest. I'm hoping I'll be able to catch up with many of these (and I'll have to look up that Mali film in the catalog).