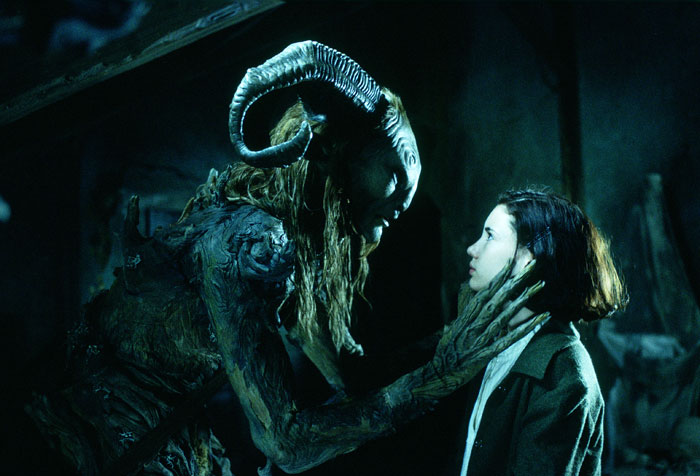 Not for the wee ones.

Guillermo Del Toro's "Pan's Labyrinth" is that rarest of cinematic rarities, a fully and flawlessly realized fantasy film. It's also, as of today, my favorite movie of the dozen or so I've seen in Toronto. Layers of imagery and storytelling fold back on themselves to create a completely formed world. And, best of all, it's a fairy tale that has not been prettified or bowdlerized for kids. It stakes out imaginative territory much closer to the fantastic visions of Bergman or Cronenberg than to those of C.S. Lewis or Tolkien. (The R rating for "graphic violence and some language" should tell you something. I think the film earns its R -- though I'm sure there are plenty of kids under 17 who will love it -- but I'd prefer that the R be attributed to "gruesome imagination.")

It's 1944, after the Spanish Civil War, and the fascists under dictator Francisco Franco are fighting the insurgents (or rebel "freedom fighters," as the film portrays them). A little girl named Ofelia is taken by her pregnant mother to live with her evil fascist stepfather, Captain Vidal, at a military installation in an old mill in the forest, next to an ancient stone labyrinth. Ofelia longs to join her real father, now dead, and to sit at his side as the princess of a fantasy kingdom. Insects, faeries and a faun appear to her, claiming that she is the long-lost princess they, and her father, have been waiting for.

In recent weeks I've written about how much I object to "quest" movies in which the tasks the hero or heroine is called upon to perform are arbitrary and meaningless. ("Lady in the Water" springs to mind.) "Pan's Labyrinth" gets it right, slipping back and forth between Ofelia's otherworldly adventures and the brutality of real life so that they reflect, and lend resonance to, each other.

There's a time and a place for fantasy, but as her mother tells her, she is going to have to learn that the world is a cruel place. (Contrast that with the unconscionable effort to deny the reality of a concentration camp in the despicable "Life is Beautiful.") Ofelia makes mistakes, and pays dearly for them, but she also succeeds by disobeying the rules. As the camp doctor says to Captain Vidal, what is the sense of blind obedience? Only Good Little Fascists (and Good Little Nazis) believe in obeying authority without question. (Any contemporary political parallels are strictly unavoidable.)

As del Toro says in the press notes: "'Pan's Labyrinth' unfurls during the middle of the pro-Franco period, and thus deals with fascism -- its very essence. For me, fascism is a representation of the ultimate horror and it is, in this sense, an ideal concept through which to tell a fairy tail aimed at adults. Because fascism is first and foremost a form of perversion of innocence, and thus of childhood."

When Ofelia asks Mercedes, a servant and surrogate mother, if she believes in faeries, Mercedes doesn't coddle her: "No, but I did when I was a little girl. There are a lot of things I don't believe in now that I believed when I was a little girl." An American studio film would insist on the triumph of fantasy -- on the myth of Peter Pan, rather than Greek/Roman Pan -- where the adults have to rediscover a childlike world of lost magic. Not so here. It's the girl who has to learn lessons in order to claim her place in the world.

The visual conception of the movie, from beginning to end, is flawless and mesmerizing -- most notably the bizarre and grotesquely gorgeous creatures and bugs Ofelia encounters. Doug Jones, who plays Pan the faun and an astoundingly hideous apparition called The Pale Man, is so eerily otherworldly his characters gave me goosebumps every time they appeared.

The moment "Pan's Labyrinth" ended, I wanted to start it over again.