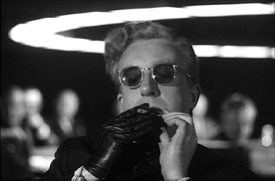 My list of "101 Movies You Must See Before You Die" has generated some provocative e-mail. As I mentioned in my original posting, this was a list I came up with in 1999, providing what I'd consider to be the most important common cultural touchstones in films from the 20th century. It's not a list of the best films (some I don't even like much), or the most important films, or even my favorite films. (The latter list, circa 1998, is here -- and it needs some updating.) I could easily have listed 202 titles (or, perhaps, even 1001, as a certain book with a similar title does), but I limited myself to a short list. That wasn't enough for everybody, though...

In his recent post, Emerson provided the list of 101 essential movies, and asked readers "How many have you seen?"

I like to think of myself as a person who fits in between the average movie goer and the more sophisticated cinephile. So I'm aware of the issues that are important to cinephiles, and I concede their validity – but frequently I'm just looking for "entertainment" rather "art".

There are 5 movies on this list which I have told myself that I will never see under any circumstances. The average birthday of these movies is 1979.

Which makes me think that either my taste in movies tends toward the older, or their has been a serious decline in quality in the last 30-40 years.

Emerson's list also supports this contention, based on the count by decade:

So, am I (and others) right in saying most movies made today are not as good? Or should I view films from this list starting with the oldest – "Intolerance"?

It's kind of cool to see it broken down like this, even though I didn't do it consciously. After all, it takes time to see if a movie has lasting impact (otherwise I might have listed "Independence Day" or "Gandhi" or "Titanic" -- films that had considerable impact when they were released, but haven't endured well). I'm kind of surprised there were so many films from the '80s and '90s -- not only because they're the most recent, but because I don't think they were distinguished by nearly as many landmark films as in earlier decades.

For another point of view, there's this from Nick Dingle:

I find it interesting, Mr. Emerson, that your "101 movies you must see" list contains only 13 movies from the past 25 years. Only 6 from the past fifteen. Has no other worthwhile work been created in all this time? How depressing.

There is something tiring about these "100 most ____ movies of all time" lists - about the constant insistence that anyone who doesn't think "Citizen Kane" is the best film ever made (or *gasp*... hasn't seen it!) is somehow "movie-illiterate." Can we please try to shed the idea that movie-making peaked somewhere between the fifties and the seventies? That anyone who is age thirty-five or younger grew up during some kind of dark age of cinema?

Give me a list of "must see movies" that has the courage to admit that "Raiders of the Lost Ark" is better than "North by Northwest." That "The Truman Show" is better than "Dr. Strangelove." That "The Silence of the Lambs" is better than "Psycho." And not only better examples of their genres, but more tightly paced, stronger narratives, better acting, improved color and film quality. Films which will give even the most pretentious intellectual just as much an appreciation of the art as movies from half a century ago.

Let's stop living in the past. It hasn't all been downhill, has it? Be the first to show us a list with something new.

Advertisement
Oh, Nick -- I'd hardly be the first to show you a list with newer movies. That's exactly the skewed perspective I was trying to address with my list. There's a prevailing notion in our culture nowadays that newer is better, purely for technological reasons. That's why we keep getting these unnecessary (and vastly inferior) remakes of movies from as recently as the '70s and '80s and '90s -- with "improved color" and such. But, in fact, since the birth of three-strip Technicolor, film color has not "improved" at all. Color and black and white reflect aesthetic choices. And I'm inclined to agree with Roger Ebert when he says he'd take a black-and-white movie over a color one, generally speaking, because it gives you a more stylized vision: "You can get color for free. Life is in color. Only film is in black and white."

As for acting styles having "improved" -- that, too, is hogwash. There are different styles of acting, but one is not inherently "better" than another. It all depends on how these styles are used to create the world of the film. As for your movie comparisons: I think "The Silence of the Lambs" is a magnificent film (and would easily include it on my list if there were more room), but it has nowhere near the revolutionary impact, or exquisite shot-by-shot precision of "Psycho." "Raiders of the Lost Ark" is a wonderful popcorn movie, a loving tribute to Saturday matinee serials, but no more substantial than the cheesy cliffhangers on which it's based (ditto "Star Wars" -- although I did include the best "Star Wars" movie, "The Empire Strikes Back," on my list because it deepened and extended the mythology). As for "The Truman Show" and "Dr. Strangelove"... you've got to be kidding. "The Truman Show" is a terrific idea for a movie (and Laura Linney and Ed Harris are fantastic in it), but in the end it plays it safe, whereas "Dr. Strangelove" is as outrageously funny and shocking today as it ever was. Of course, that's my opinion. But, hey, it's my list!

From Tom Wolfe of Alexandria, VA:

“They're what I like to think of as the common cultural currency of our time, the basic cinematic texts that everyone should know, at minimum, to be somewhat "movie-literate."

There are at least a dozen of these that I haven’t seen, including a couple that I’m not sure I’ve ever even heard of. And I’m certainly “movie literate," in the normal sense of the term. In no sense can this list said to represent the “common cultural currency of our time," even if you restrict your idea of “culture" to just include art-house film geeks.

Now, if you had said that this was a list of “basic cinematic texts" that should be known by anyone professing to an expert on film culture, I would have less of an argument with you, but “somewhat movie literate?" I’d say someone who has only seen half of these films could easily be considered that.

Advertisement
My first inclination was to say you're right, that maybe I overstated my case for "movie literacy." But then I started thinking about a comparative list of books. Sure, you can be literate (or, at least, not illiterate) without having read, say, Faulkner's "As I Lay Dying," Dostoyevsky's "Notes From the Underground," Kafka's "The Trial," Nabokov's "Lolita," Twain's "The Adventures of Huckleberry Finn," Heller's "Catch-22," Woolf's "Mrs. Dalloway," and Carroll's "Alices Adventures in Wonderland" (to name just a few of the most important books in my own life). But I would hope you've read 'em all, and hundreds more besides.

I guess my list would form the foundation of a good, basic film education. You might even be deemed the cinematic equivalent of "well read" if you'd seen 'em all. But these are only the beginning. Even considering that about 80 percent of movies are crap, and another 15 percent are somewhat worthwhile, that leaves hundreds and hundreds of terrific movies to be seen. (And, to re-address the previous letter: Far more movies were made under the studio system in the '20s-'50s than in the decades since then, so the odds of finding lasting achievements in those earlier, pioneering years are indeed likely to be greater.)

As is the case when critics post lists, I'm sure you've already received numerous e-mails from readers demanding to know why a certain film was missing.

I thought your list served its purpose extraordinarily well. Of course, there are titles that I feel aren't that necessary to cinematic knowledge ("Mad Max 2"?). But overall, you did a fine job of hitting the essentials.

Advertisement
I think you're probably right. I think "Apocalypse Now" is only 2/3 of a great film (I'm let down by the murky final third every time I see it -- like it's struggling to express something but it isn't quite sure what), but it has indeed become the popular myth of the war in Vietnam, and it has so many now-classic moments and sequences that are enshrined in the pantheon of American pop culture. It is indeed one of those "texts" that you simply expect every American adult has (or should have) seen. Consider it added! (Now I'll have to find something else to bump off -- but "The Road Warrior" stays! Or maybe it can be "102 Movies...")