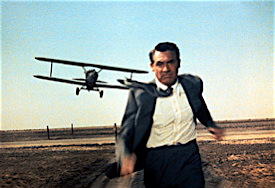 You must remember this: one of the movies' iconic images.

Further reflections on the 2006 Conference on World Affairs in Boulder, CO: John Lennon said life is what happens to you when you're making other plans. Life is also the process of finding connections between everything that happens to you (there he goes with that "We're all pattern-seeking animals" thing again!). So, last week at the CWA, three panels I was on ran together in my head in ways I think are interesting. But then, it's my head we're talking about, so I'm probably inclined to think my digressions and free-associations are interesting, otherwise I wouldn't have spent so much time mucking about with them.

The three panels I'm thinking of were about the nature of "pop" music, "Brokeback Mountain," and romantic myths in popular culture (particularly movies and pop songs) that create a falsely idealized and superficial image of "love." What did they have in common? Well, for me, they were all about the common cultural touchstones that we share as Americans living in the early part of the 21st Century.

On the pop music panel, I found myself wondering what "pop" means today. It used to be a category that helped you find radio-friendly "popular" stuff in record stores. But with the increasing fragmentation and niche-marketing of pop culture (movies, TV, magazines, music, the Internet, you name it), I wondered what the definition of "popular" music has become. "American Idol" finalists, maybe?

On the "Brokeback Mountain" panel, I talked mainly about the film as a work in the tradition of the classical American Western, exemplified by John Ford ("Stagecoach," "The Searchers") and Howard Hawks ("Red River," "El Dorado" (1967)), and the Hollywood love story, as exemplified by Douglas Sirk ("All That Heaven Allows") and many others. You can't fully understand a contemporary work of art or pop culture unless you know at least something about its heritage -- just as Robert Altman's "The Long Goodbye" (which Roger Ebert dissected shot by shot with an audience during the conference) would be meaningless without the classic private eye movies and films noir it invokes and subverts, especially "The Big Sleep" (1946) and "The Maltese Falcon." "Brokeback Mountain" is not an "anti-Western," but (in the parlance of 1973), you could definitely say that "The Long Goodbye" is an anti-noir. It's like jazz: You have to know the notes Altman isn't playing to understand how he's riffing on and around the familiar melody of the generic private detective movie.

Finally, there was the romantic myths discussion. I quoted from a few popular songs to make my point about how we are conditioned, through constant exposure to idealized myths of "one true love" and "I will always love you" to have an unrealistic and exalted notion of what love is. This Neil Diamond tune from 1967 (made famous by The Monkees) pretty much sums up the standard:

I thought love was only true in fairy tales. Meant for someone else but not for me. Love was out to get me. That's the way it seemed. Disappointment haunted all my dreams.

And then I saw her face. Now I'm a believer. Not a trace, of doubt in my mind. I'm in love. I'm a believer, I couldn't leave her if I tried.

Advertisement
This, I submit, is the equivalent of the kind of brainwashing one would expect from a religious cult: "I'm a believer"... "not a trace of doubt in my mind"... "I couldn't leave"...

This kind of thing was not unique to the Baby Boomer generation, however. Indeed, back in 1930, another great song (quoted in "I'm a Believer") by George and Ira Gershwin outlined the plight of the disillusioned romantic in a world saturated with facile Happy Endings:

When every happy plot, ends with a marriage knot and there's no knot. No, not for me.

It struck me (and things strike me all the time, like a hot kiss at the end of a wet fist) that I wasn't sure how many people in the audience would be familiar with both these song references. I mean, when it comes to pop music, I know as much about the Gershwins and Cole Porter as I do about The Beatles and The Monkees and Bob Marley and Elvis Costello and Nirvana and Wilco. (I'm also well-acquainted with Schubert and Mahler and Bartok and Prokofiev, but that's a whole other post.)

Then I was in this book store (I know this is beginning to seem like a shaggy dog story, and maybe it is) and I saw a book called 1001 Movies You Must See Before You Die. Well, back at the end of the 20th century (1999, to be exact), I had come up with a similar title and list for a big, encyclopedic movie web site start-up called FilmPix. I called it "101 Movies You Must See Before You Die." This isn't like Roger Ebert's "Great Movies" series. This isn't like Roger Ebert's "Great Movies" series. It's not my idea of The Best Movies Ever Made (that would be a different list, though there's some overlap here), or limited to my personal favorites or my estimation of the most important or influential films. These are the movies I just kind of figure everybody ought to have seen in order to have any sort of informed discussion about movies. They're the common cultural currency of our time, the basic cinematic texts that everyone should know, at minimum, to be somewhat "movie-literate." I hope these movies are experiences we can all assume we share.

So, I looked up the list and here it is, with only a couple changes. (I added "Fight Club" because it's essential and it hadn't been released at the time I made the list.) I remember I tried to represent key examples of all important genres, movie stars, directors, historical movements, and so on -- like an overview of the 20th century in 101 movies. Yes, there are many more I'd like to add, but remember, this is only a primer. How many have you seen?

101 Movies You Must See Before You Die