I think my very favorite thing in Rian Johnson's "Looper" is a squiggly cloud. It hangs there in the sky above a cornfield and you can't help but notice it. Which is good, because this is a time-travel movie and the cloud comes in handy later when something happens again in this same spot and the cloud tells you what time it is. Thanks to that cloud, you know this is a re-run.

In one version of the present-future-past, Joe (Joseph Gordon-Levitt) shoots his future self (Bruce Willis) and in another he doesn't. I couldn't remember why that happened at first just now, but then it came back to me. Johnson brought in Shane Carruth, writer-director of the meticulously planned and way more convoluted time-travel thriller "Primer" (2004) to do some special effects work, which indicates to me that RJ is fairly serious about his science-fiction. (He also wrote and directed "Brick" and "The Brothers Bloom," both of which contain some nifty, well-plotted twists.)

The premise is tasty, the performances are swell, Piper Perabo's bare breasts are pert and pointy, the make-up is variable (there's a low-light scene on a rural porch in which JGL's Willis-nose prosthetic looks gray and dead -- at least in the digital projection I saw), but where "Looper" really excels is in the details and textures of the world it creates. The movie takes place in 2044 -- with occasional flashes to 2074, which is where when the assassinées live. They're zapped back to 2044 (when it's easier to dispose of bodies) and immediately plugged by the mobster-hired executioners known as Loopers. 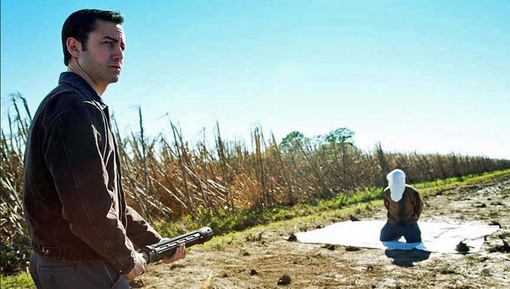 Eventually, though, the day will come when, as they say, the loop is closed: A Looper will have to shoot his future self. My first thought upon learning this was: Wow, that's a tempting deal. Basically, you're getting a big payoff (in bricks of silver and gold -- we've returned to the precious-metal standard for currency) and 30 years of guaranteed life. That's peace of mind, no? You know you won't die in a car crash, perish in a natural disaster, get hit by a meteor, eat a poisonous mushroom, spontaneously combust... You've got three decades of uninterrupted livin' to do! (Probably I had this response because I don't expect to be around for another 30 years. Or 20. Or 10. But who knows? I never thought I'd reach the age of 40.)

But it seems that's not quite how it works. The past, present and future are always malleable, and (this is my favorite touch) if somebody in the future changes the past, it changes future persons' memories of the past accordingly. So, if you lost your keys in the present and then, from the future, went back to the past and avoided misplacing them, your future self would have no memory of losing those keys because it's like it never happened. I like that. 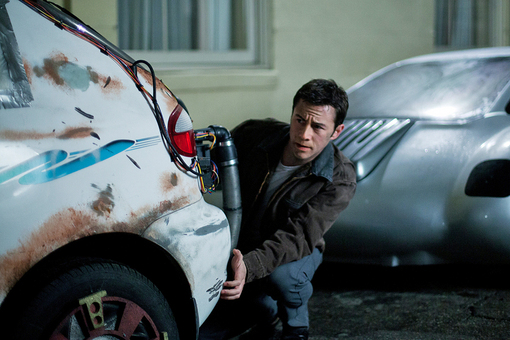 As I said, besides the memory dealie and the squiggly cloud, the stuff I like best in "Looper" are those little touches that give its mid-this-century world a distinctive texture: There's a snazzy, blue-flame-spewing motorcycle that zips through the air like a jet ski, but most of the vehicles on the road appear to be vintage beaters (1960s-1990s from the looks of 'em) that have been retrofitted with Rube Goldberg-inspired exterior wires and tubing to accommodate Future Fuel. Kind of reminded me of "Road Warrior."

The hit recreational designer drug of 2044 is administered with eyedroppers. I don't know what it does, but Joe is addicted -- and so, apparently, are many of his pals, from hipsters to lowlifes. The weapon used by Loopers is called a "blunderbuss," a cylindrical steampunk firearm that works like a shotgun -- crude, messy and inaccurate, but gorily effective at short-range death-dispensing.

The weirdest (and most unnecessary) thing is called "TK" (supposedly for "telekinesis"). It's something people can learn, and most who can do it seem to use it as a cheap trick for picking' up chicks -- that is, they concentrate on a quarter (yes, they still make quarters in 2044) and make it float above their hand. With their mind. 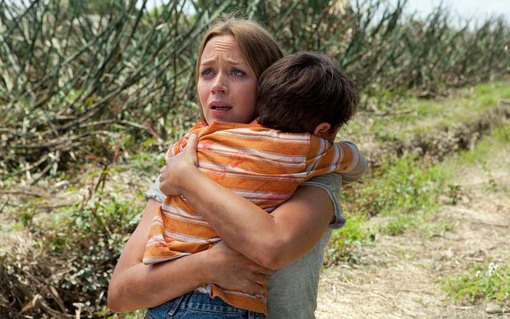 There are jumbotron billboards for TK training (yes, there are billboards in 2044, too) but nobody is terribly telekinetic except for a kid named Cid (Pierce Gagnon) who lives on a farm outside Kansas City with his maybe-mom (Emily Blunt), is 3'3" and about 38 years old. I'm just guessing at his age from his credits: one TV series ("One Tree Hill") and three features. It seems that wee Cid has a temper problem, extraordinary telekinetic abilities and (as it turns out) will grow up to be a criminal mastermind/Stalin-esque tyrant known as The Rainmaker, which is why "Old Joe" (Willis) is coming back from the future (or forward into the past!) to bump him off before he can break bad. But, you see, maybe it was/is/will be the trauma of seeing his mother killed (not by Bruce Willis in 2044, I guess -- though why wouldn't that have the same consequences?) that causes him to turn into a criminal mastermind/Stalin-esque tyrant known as The Rainmaker in 2074. I think I already said that. But that's the kind of movie this is. What all this telekinesis stuff provides is an excuse for Johnson to do to Garret Dillahunt (and we know we must see anything Garret Dillahunt's in) more or less what Brian De Palma did to Fiona Shaw and John Cassavettes in "The Fury" (1978). Less, actually, but it's terrific if you like to see people levitate and bleed. A lot. 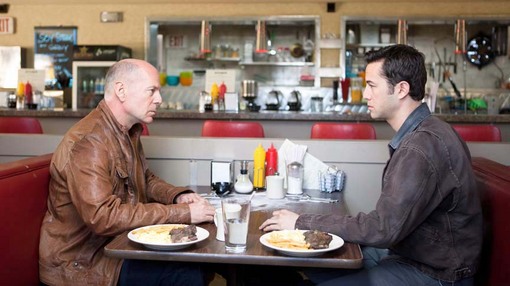 "Looper" is a clever picture -- and not just on the level of plot or dialog, though there are some wonderful lines, too. Another thing I liked is the scene at the diner in which Young Joe and Old Joe confront each other (they both order steak and eggs -- one in the present, the other 30 years later minus 30 years backwards). The way the shot is framed, perpendicular to the table with Willis on one side of the screen and Gordon-Levitt on the other, it reminded me of old-style split-screen effects, where an actor interacts with himself in the same frame. I was so into the idea of Willis and Gordon-Levitt being the same guy that -- just for a second -- I found myself looking at the screen to see if I could detect the seam running down the middle, or any telltale CGI artifacts. I guess that's a good sign, if you think about it.

You'll undoubtedly notice a lot of movie references sprinkled throughout "Looper." The Looper's favorite glitzy/sleazy nightspot is called La Belle Noisseuse Aurore, after the Paris nightclub in "Casablanca"; and the repeated image of clouds of cream in a coffee cup recalls Jean-Luc Godard's 1967 "Two or Three Things I Know About Her." The grungy "Blade Runner" urban dystopia (downtown looks like one big skid row, the wrong side of the futuristic Midwestern tracks -- shot on location in Louisiana and Shanghai; Joe is a fool to drive a fancy convertible with the top down through these scummy streets). Noah Segan's fuck-up "gat" henchman is named Kid Blue (after James Frawley's 1973 counter-culture comedy-Western starring Dennis Hopper, Warren Oates, Ben Johnson and Peter Boyle -- which premiered at the NYFF and which I saw many times in the '70s because it was always on a double-bill with something else I wanted to see). And there's the riotous scene in which Bruce Willis gets to go all Bruce Willis "yippie-ki-yay motherfucker" "Die-Hard" berserk with guns -- literally -- blazing, all over Looperville HQ. 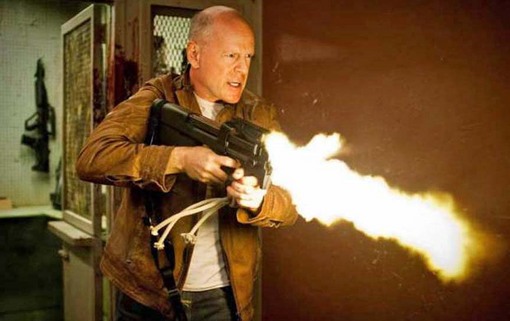 And I haven't even mentioned Jeff Daniels as this movie's incarnation of The Pin -- the wise guy who runs the Looper franchise with an iron fist... or a hammer. As usual, Daniels is effortlessly fantastic, coming up with line readings that had me laughing and shaking my head: "How does he do that?!"

UPDATE: Omer Mozaffar saw a much darker movie than I did. I like this:

In its background, we see that every utopian society must sanitize itself of its unwanted trash: human and waste. Think of the utopian mindset we create for ourselves when we take our unmentionables and move them out of sight, out of mind, consequently out of responsibility. Despotic states are notorious for the way dissidents tend to quietly vanish. In our culture, we put criminals in hidden cages and we dump our waste into the ocean. There was a time in our culture when incarceration focused on rehabilitation; now it is just penalty. The old British sent their criminals down under; the Soviets: Siberia. Think of all those notorious prisons, whether we speak of Attica, Alcatraz, Evin, the Bagne, or the Bastille. Think of the concentration camps of genocide, keeping the exterminated out of the purview of most citizenry. The theme is the same: we exert our impressions of our own civility by pushing our unmentionables out of sight. In David Fincher's "Alien 3" (1992) they sent their criminals to another planet. In Deepa Mehta's "Water" (2005) widows were relegated to a life sentence in a convent. In "Looper," the men in black coats simply send the unnecessary crooks to a different era for execution. Think of how frighteningly silent that method is. So silent, that we might watch this movie without even noticing that.