Suicide by way of homicide

Rian Johnson's hyperviolent "Looper" (2102) is the smartest movie I have seen in a long time. It has that fearless edge of an independent film, throwing out all the stops. Its masterful plot carefully hides its foreshadows as elements of its constructed universe. It is a science fiction movie with rudiments of mystery, thriller, horror, comedy and even eschatology. So many characters, young and old, were loaded with charisma, sometimes unexpectedly. My fellow critic Nick Allen was correct when he told me not to watch any trailers (too late) and not to let anyone tell me about this movie. Because of its hyperkinetic, volatile unpredictability, I cannot help but to call this movie "crazy." After watching it, you might have to go look at snails for a few hours to calm down. More than that, this movie is clearly one of the best of the year.

Joe (Joseph Gordon-Levitt, looking sometimes like Keanu Reeves in his sometimes distracting make up) lives in 2044, thirty years in the dystopian future. He drives his candy apple red sports car through the darkened streets of withered pedestrians. He saves his clanking silver pennies for big dreams, earning them slowly as an executioner. 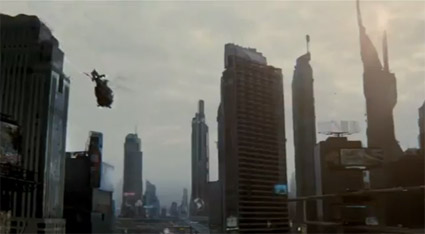 Thirty years beyond his own future, time travel has since been invented and outlawed by a government that keeps full track of everything. The unwanted elements of society (i.e. criminals) are secretly sent back to 2044 either by crime lords or corporations (if there is a difference then) for execution. "Loopers" such as Joe only know the time and place of their victims arrivals, but not their identities. The victim appears; the Looper shoots and kills; he collects his reward. At some point, a loop gets closed. Meaning, the victim appears; the Looper shoots and kills; he finds out that he just killed his future self. I wondered why the company would specifically have you execute your future self, rather than have another Looper do it and never know. Then, you would go on working for the company forever. But, that would be a different movie. 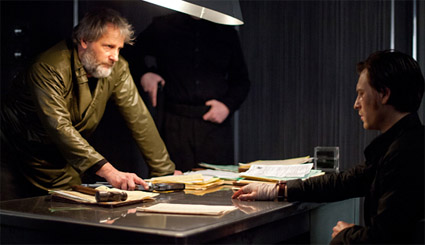 The most fun of science fiction movies have the most fun with questions, ideas, and philosophies. This film has everything. Everything. That this film merges so many ideas into one seamless whole is alone one of its great accomplishments.

In its background, we see that every utopian society must sanitize itself of its unwanted trash: human and waste. Think of the utopian mindset we create for ourselves when we take our unmentionables and move them out of sight, out of mind, consequently out of responsibility. Despotic states are notorious for the way dissidents tend to quietly vanish. In our culture, we put criminals in hidden cages and we dump our waste into the ocean. There was a time in our culture when incarceration focused on rehabilitation; now it is just penalty. The old British sent their criminals down under; the Soviets: Siberia. Think of all those notorious prisons, whether we speak of Attica, Alcatraz, Evin, the Bagne, or the Bastille. Think of the concentration camps of genocide, keeping the exterminated out of the purview of most citizenry. The theme is the same: we exert our impressions of our own civility by pushing our unmentionables out of sight. In David Fincher's "Alien 3" (1992) they sent their criminals to another planet. In Deepa Mehta's "Water" (2005) widows were relegated to a life sentence in a convent. In "Looper," the men in black coats simply send the unnecessary crooks to a different era for execution. Think of how frighteningly silent that method is. So silent, that we might watch this movie without even noticing that. 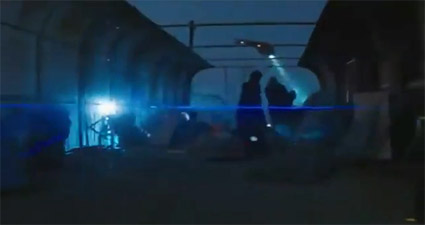 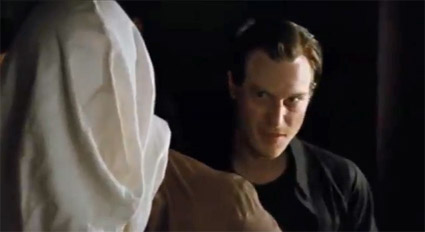 In the foreground, however, this film explores those most basic questions that would come from time travel: destiny and all its peculiarities. Consider the gift or curse of knowing the exact moment, location, and method of your death. Does anyone have this knowledge, except a Death Row convict? It is one thing to know that you've reached the end of your rope with disease or, perhaps, with moments like the ending of Wolfgang Petersen's "The Perfect Storm" (2000), when the sailors accept that they were going to drown.

It is something entirely different to sense that you have reached that predestined fixed point of your mortality. I often wonder how often otherwise healthy people know that they are about to die. An exhausted Malcolm X (1992) reflects in a mirror that it is the time for his martyrdom. In Tim Burton's "Big Fish" (2003), the hauntingly elegant, smiling Witch in the scary house could tell you how and when you would die. In "Looper," we take this point to a whole new level: you commit homicide, discovering that you just committed suicide. The strange thing is that it feels less like killing yourself, and more like killing your long lost father.

But, how would you respond? We see three responses in the film. The first is celebration. You know your final destiny; now you are free to enjoy your next thirty years, even though your final day will have its abrupt ending. Yours becomes a life of invincibility: you could live as recklessly as possible, knowing that you will reach that final day in one piece. The second is fright: a Looper discovers his future self and cannot bring himself to terminate himself, even though that choice would bring very serious consequences on both versions of him. The third: a Looper wants to kill his self so that he does not get punished (with painful death). But, suppose we are not in the year 2044, but are in the year 2070: would the concerns change, knowing you only have 4 years? I think that it would.

The movie wrestles further with this point. If you had thirty years of this freedom from mortality, would you be able to change yourself? We follow one character through his thirty years, and discover that, just as he was an executioner for the last few decades, he remained a killer for the next few decades. That was until a force crash-landed into his life, opening his unexpected pathway toward healing and redemption. But, that force in his life gets destroyed by a killer. It is in the nature of destiny that hope, with her tender smile and flowing hair, drops in your path unexpectedly, and, it is in the nature of destiny that terror takes her away. The woman who brings love to your life becomes your utopia, and like any utopia, she goes away. 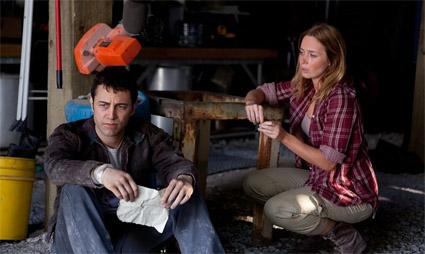 Not only that, how would you respond, meeting yourself (from the past or future)? Again, the interactions between present-day-Joe and future-Joe (Bruce Willis) have that feel of an angry son meeting his reformed, long lost, disapproving father. Within his emotional map, that is probably the only way present-day-Joe knows how to interact with his future self. Consider his experiences. Emmanuel Levinas, the Holocaust survivor, speaks of the power of the human face in generating compassion, and the consequent power of dehumanizing someone by hiding their faces. So, when the Looper is killing these masked, anonymous visitors from the future, it is as though he is shooting the carcass of a dead cow. Already his life has reduced to that banality of evil, killing so frequently that it becomes something akin to factory work. If they arrive unmasked, however, or if they start singing: that changes the experiences enough that the executioner second-guesses himself.

On top of that, in Joe's case, his parents abandoned him, leaving him to search for love without receiving that nurturing that would teach him how to give love. When meeting his future self, he is not interested in learning about himself. He wants this crash-landed stranger plucked like a thorn from his foot, so that he can continue with his life. And likewise, the future-Joe does not try to teach him to reform himself. Perhaps, because he cannot see past his own selfish goals. Perhaps, because that would change the future. Perhaps, because he does not know to do that, for those who do not know how to give love, do not know how to give self-care.

So, part of the plot relates to killing people from the future. In the films latter part, the plot involves someone from the future killing someone from the present, who will grow up to become an anti-Christ of sorts, destroying that utopian future. Here we face that curious question of the Hitler baby. If you lived in the late 1800s, and had within your reach the little child Adolf Hitler, who has all the cuteness of a child, would you be able to kill him? Without implying anything about any sort of differences in morality, but raising the question about proximity to horror: would someone from a different culture give an answer different than the grandchild of a Holocaust survivor? This film itself does not give an answer, but the characters do, somewhat. That man, seeking to kill the anti-Christ child, does not concern himself with the havoc this child will someday cause the world. That man wants to prevent the child - in his reign of terror - destroying that man's personal life.

But, returning to the question of destiny: what holds some people back from killing the child Hitler is something that also gets explored, though not thoroughly answered in the film. Can the child Hitler, with sufficient nurturing become someone entirely different? Two characters decide that the answer is "yes," but the film does not tell us if they are correct. In another way, this film about time travel definitely tells us that some destinies can be changed, but can others be changed? We would have to wait until the future to find out.