Consensus and the Big Film Poll Blowout of 2007 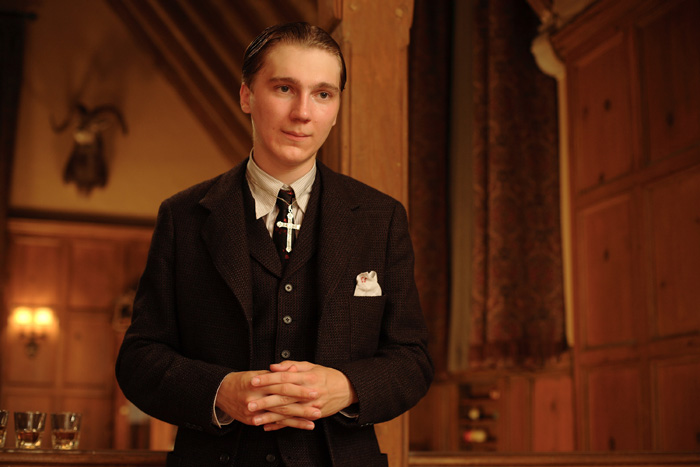 Conspiracy or coincidence? "There Will Be Blood" opened nationwide on Friday and won the Village Voice/LA Weekly film poll and the National Society of Film Critics poll the same weekend! What can it mean?

"There Will Be Consensus": That was the headline for the intro by Village Voice film critic (and self-described "lapsed structuralist") J. Hoberman, accompanying the results of the annual film critics' poll co-sponsored by the Village Voice and the L.A. Weekly, which are both published by Village Voice Media (along with the SF Weekly, Seattle Weekly, Kansas City Pitch, Nashville Scene, Cleveland Scene, Dallas Observer, Miami New Times, Phoenix New Times, Minneapolis/St. Paul City Pages, and several more). Unless you read the same piece by Hoberman in the LA Weekly, in which case the headline was "If It Bleeds, It Leads." I don't know what the headline was in those other weeklies, but you can look it up if you like.

Here, then, is the bleeding consensus, which is, as you might expect, practically everything you would expect in a consensus -- which is to say hardly anything that you would not expect. (Like Iowa.)

No surprises there -- at least not if you've been paying any attention to mainstream movie reviews coming out of New York, Los Angeles or the major international film festival circuit (Cannes, Telluride, Toronto -- the launching pads for most of the above) in both 2006 and 2007. Compare to the indieWIRE poll results, which are almost identical -- with late-December opener "The Diving Bell and the Butterfly" at #13 (IW) instead of #7 (VV/LA); "Assassination of Jesse James" at #7 (IW) instead of #12 (VV/LA); and -- the most dramatic difference! -- "Ratatouille" at #20 (IW) instead of #9 (VV/LA).

I wonder: Were it not for DVDs -- especially DVD critics' screeners -- and, to a lesser extent, On Demand distribution channels like HDNet and IFC First Take, how many of these films would have had the chance to become critical favorites outside of New York (and maybe LA) by the end of 2007? What are the odds that films that never even played theatrically in more than one or two American towns ("Syndromes and a Century," "Colossal Youth"), or that don't open in more than a few until 2008 ("There Will Be Blood," "4 Months, 3 Weeks, 2 Days," "The Diving Bell and the Butterfly") would have placed so strongly in national critics' polls with mid-December deadlines? I think I'm impressed... unless, wait a minute, the success of such films is actually further evidence of insular critical hype and inbred groupthink. But why choose to think of it in that way?

From this link you can see all the vote-getters by category (feature films, performances, documentaries, first films, undistributed films, worst film), or look at the individual contributors' ballots here. Including mine, although I immediately regretted impulsively citing "Southland Tales" as the "worst" movie I saw in 2007 and still do. I'd much rather make a case against the bloodless literalism of "Sweeney Todd" (musically, sexually and politically neutered) or "Youth Without Youth" or "The Diving Bell and the Butterfly." But let's keep things in perspective. None of those movies expressed a cinematic worldview quite as reductive as those reviews of "No Country for Old Men" that invoked this year's most hackneyed substitute for criticism, summarized in this clip from Hoberman's intro:

In formal terms, the Coen brothers' latest pinball machine is obviously superior to 90 percent of the year's releases. But it's also a soulless enterprise, with nothing more on its mind than the expert manipulation of the spectator, critics included.

The Voice didn't run a Hoberman review of "No Country for Old Men" (it reprinted Scott Foundas's admiring piece from the LA Weekly), so we may never know more precisely what Hoberman thinks he is "obviously" saying about the movie, or the movies, or himself. (Some of my responses to similar autonomic spasms can be found here and elsewhere. In what language can something that is "obviously superior to 90 percent" of movie recent releases "in formal terms" be considered the equivalent of a "pinball machine" -- one that manipulates instead of being manipulated? What is the nature or significance of such "formal" superiority if we're drawing comparisons between movies and pinball machines? Is a wristwatch formally superior to a Mondrian? Which one? Why? The answer, obviously, is Salvador Dali's 1937 movie script for the Marx Brothers, "
Advertisement
Giraffes on Horseback Salad.")

Hoberman offers the opinion that "NCFOM" might well be his choice for the year's "Most Overrated" picture if there were such a category as that. And in his next paragraph he announces he's pleased that the strenuously over-praised and over-maligned "Southland Tales" tied with the comparably ambitious and significant "The Bucket List" for the year's Worst Film -- though each really only received five votes -- just ahead of "300" (2006) and "Hostel: Part II" with four each, and "Juno," "Margot at the Wedding," "Redacted" and "Trade" with three):

You know something's happening when "Southland Tales" also headed three critics' lists as the year's Best Film [Melissa Anderson, Bill Krohn, Nathan Lee]. Time constraints have made it impossible to calculate the 2007 poll's Passiondex— my formula to measure the degree of ardor with which critics voted for particular movies—but my heart tells me that "Southland Tales" is the obvious winner. Here is a movie that some people love and others love to hate. That's double passion! And that's good.

Yes, doubleplusgood passion. Something must be happening. Hoberman predicts that Pedro Costa's "Colossal Youth" (#10) might have been the year's choice for Worst Film "had more critics seen it" ... although, in fact, nobody did vote for it in that category, including critics who had seen it. This makes me wonder if, perhaps, there might have been any other films this year that some critics loved and others just hated... Nah.

Surely this poll's top vote-getter, "There Will Be Blood" (also the topper of the IndieWIRE poll) could not among them, since nobody chose it for Worst Film (exactly as many as did not choose "Colossal Youth"!), which is... a bad thing or a good thing? On the other hand, Charles Taylor picked "No Country for Old Men" as his worst film, though this may be the only attention he gets for doing it.

Accompanying the poll results is another list by S.T. Van Airsdale, better known as "The Reeler," who makes an annual ritual of listing and critiquing the "misconceived hype" of movie critics' "Top 10 Lists" on his blog. This year, he adds "Five Resolutions to Improve NYC Film Culture in 2008." The list includes... a condemnation of lists!

I salute the participants of this year's Village Voice critics' poll for taking the bold step of naming "There Will Be Blood" the year's best film. Of the hundreds of movies released theatrically in 2007 in New York, it took guts to step up and contribute the nth permutation of the 20 or 25 titles that you will find rejiggered on a zillion other lists this season.

Whatever—as long as the listmaker has the most profound final word (or blurb) about "Eastern Promises," his or her job is done. Are you having fun yet?

Not really. Quoth Tex Avery's canary: "I been sick." I haven't even done my blurbing yet -- and, good lord, it's five days into 2008 and time for the National Society of Film Critics awards -- which will surely have to strike a pose different from the LA Film Critics (dominated by "There Will Be Blood") or the New York Film Critics (dominated by "No Country for Old Men"). Or, possibly, not. Indeed, the only thing that could conceivably be less surprising than the one thing would be... the other thing! [Oh, good grief: It is!] That, I submit, is the ultimate cancer on contemporary film! The thing. Not the other thing, which (to quote my gastroenterologist in a letter dated August 26, 2007 -- and I'm not making this up) "appears to be a benign carcinoid tumor, but we do have to be somewhat concerned in these cases as these tumors can act in a fashion other than benign, even when they appear to be benign."

I hope that settles this Top Ten thing once and for all.