The slick and the raw 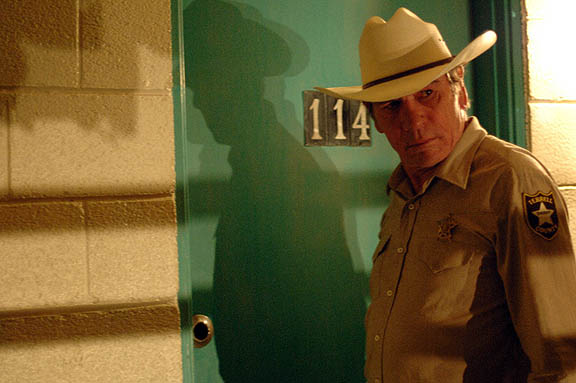 Sheriff Ed Tom Bell is no city slickster. Still, he thinks knowing how to use a camera might possibly be a good thing when it comes to making a movie.

Two sentences in the New York Times story announcing the line-up for the 2008 Sundance Film Festival jumped out at me as symptomatic of a fashionable but misguided attitude toward the art and craft of filmmaking today:

And some of the more striking, original documentaries were quite unpolished, [Sundance festival director Geoffrey] Gilmore said. “You’d get a sense they’d never touched a camera before.”

Advertisement
Now, I am all for striking, original films -- including unpolished ones. Among my favorite documentaries of recent years are Chris Wilcha's "The Target Shoots First" and Jonathan Caouette's "Tarnation" -- both films made with small consumer video cameras by people recording their own experiences over long periods of time. Neither man considered himself a "filmmaker" when he started shooting, but both discovered what they needed to express while making these films. I could not be more enthusiastic about the means of production finally being within the reach of the proletariat (people like me).

But, as I've been wondering for some time now: What is behind this popular and patently false critical suspicion that a "well-crafted" movie is automatically phony or inauthentic, while a film that is "unpolished" is considered genuine -- automatically real or truthful? This is especially troubling to me when the people expressing this attitude fail to convey a recognition of the distinctions between artistry and production values -- or between validity and lack of skill.

Likewise, I've never understood why a so-called "independent film" (a term that usually refers to the source[s] of the production financing, if that) should be appreciated or evaluated any differently than a studio-bankrolled film (which may well be a negative pick-up distributed by a major or one of its "dependent" arms). It's unbelievably hard to get a film made either way, and just because you have studio financing doesn't mean you won't be fighting for money or time or resources (and, probably, creative control as well). It definitely means that more of your budget will go to overhead costs. Studios also force you to deal with development execs who may consume a lot of your time and energy trying to put their unwelcome fingerprints on the movie (just to justify their salaries). But even if you get your movie made more or less the way you want to with your indie financiers, there's no guarantee that your indie distributor (if you get one) won't demand cuts or changes that don't necessarily make the film any better or more marketable.

I've seen plenty of big-budget Hollywood films made by professionals who evidently knew little or nothing about what they were doing. It's like they'd never touched a camera (or an editing table or a mixing board) or even encountered an actor before. And it's not pretty. It isn't any good, either, but there it is. I've also seen low-budget films, shot on video or 16 mm, that exhibit an affinity for cinema, for communicating through images and sound, that no budget or payroll could ever buy. And I've seen way, way too many indie movies that have no reason to exist except as somebody's lottery ticket for a Hollywood deal. They're as empty as any studio product, just more dishonest about their commercial ambitions.

The NYT's Manohla Dargis, one of the best critics in the country, recently wrote in her review of "Southland Tales":

American cinema is in the grip of a kind of moribund academicism, which helps explain why a fastidiously polished film like “No Country for Old Men” can receive such gushing praise from critics. “Southland Tales” isn’t as smooth and tightly tuned as “No Country,” a film I admire with few reservations. Even so, I would rather watch a young filmmaker like Mr. Kelly reach beyond the obvious, push past his and the audience’s comfort zones, than follow the example of the Coens and elegantly art-direct yet one more murder for your viewing pleasure and mine. Certainly “Southland Tales” has more ideas, visual and intellectual, in a single scene than most American independent films have in their entirety, though that perhaps goes without saying.

Again, let me state that I am against moribund academicism in all of its insidious forms. If you saw my house, you'd know I have a low tolerance for fastidious polishing, too. I've been a gusher about "No Country for Old Men" since I first saw it in Toronto, and I hope I've at least begun to explain my reasons. Frankly, I don't know if I would prefer to watch "Southland Tales" simply because I haven't yet seen "Southland Tales." I would say, however, that young filmmakers could do a lot worse than attempt to follow the example of the Coens, tenacious independents who have in 21 years somehow managed to make a dozen films that unmistakably reflect their idiosyncratic vision -- mainly because they actually have one. (You can argue about "The Ladykillers" and "Intolerable Cruelty" all you like, but nobody else could or would have made these movies.) Lord knows, more young filmmakers could aspire to "follow" Kevin Smith or Eli Roth and the American cinema would be in far worse shape than it is today. If what the Coens do is merely considered "fastidiously polished," then bring in Tony Randall as Felix Ungar, wearing an apron and brandishing an aerosol can of Lemon Pledge in one hand and a dustrag in the other, and we'll see if "No Country for Old Men" is up to
Advertisement
his standards of polished fastidiousness.

My impression, though, is that the critical winds are blowing in the opposite direction, toward a distrust of craftsmanship (because it requires work, experience, expertise?) and an embrace of crudity simply because it's undiluted (even if it's also unfiltered by talent). Yet, surely, skill in the service of vision is no vice. I don't know if the striking, original documentaries in the Sundance Film Festival would be considered cinéma vérité (French for "phony" -- I mean, "A style of documentary filmmaking that stresses unbiased realism," according to the American Heritage Dictionary), but I am reminded of Werner Herzog's "Minnesota Declaration" of 1999, in which he reaffirmed his passionate dedication to art and "ecstatic truth":

1. By dint of declaration the so-called Cinema Verité is devoid of verité. It reaches a merely superficial truth, the truth of accountants.

2. One well-known representative of Cinema Verité declared publicly that truth can be easily found by taking a camera and trying to be honest. He resembles the night watchman at the Supreme Court who resents the amount of written law and legal procedures. "For me," he says, "there should be only one single law: the bad guys should go to jail."

Unfortunately, he is part right, for most of the many, much of the time. [...]

5. There are deeper strata of truth in cinema, and there is such a thing as poetic, ecstatic truth. It is mysterious and elusive, and can be reached only through fabrication and imagination and stylization.

There are all kinds of poetry, and all kinds of cinema -- powerfully raw and exquisitely refined. (Also, crudely inept and slickly soulless.) Let's not pretend it's an either/or choice.