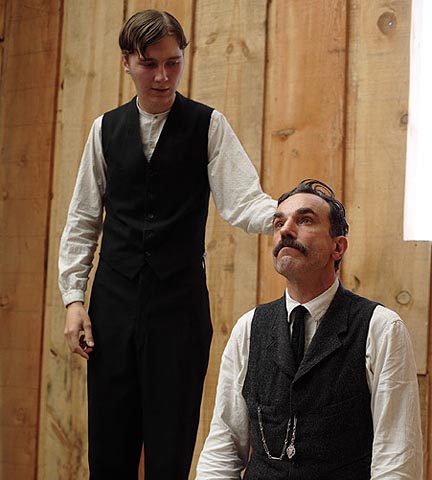 Paul Dano anoints Daniel Day-Lewis in "There Will Be Blood."

IndieWIRE has announced the results of its annual critics' poll, and Paul Thomas Anderson's "There Will Be Blood" dominates (picture, director, screenplay, cinematography, lead performance), followed by David Fincher's "Zodiac" and Joel & Ethan Coen's No Country for Old Men.

For most American viewers, this is going to be a Netflix list: Two of the top ten movies never barely opened theatrically outside of New York ("Syndromes and a Century," "Colossal Youth"); two never played in more than 20 theaters at once ("Offside," "Killer of Sheep" -- the restoration of Charles Burnett's 1977 film); two haven't opened yet, and won't in most places until 2008 ("There Will Be Blood," "4 Months, 3 Weeks, 2 Days"); and, in these days when wide releases typically launch on 2,000 - 4,000 theaters, two never made it to more than 400 at any given time ("I'm Not There" [149], "The Assassination of Jesse James By the Coward Robert Ford" [301]). Only two others ever spread beyond 1,000 screens: "No Country for Old Men" and "Zodiac." Three of the ten best selections -- "Killer of Sheep," "Offside" and "Zodiac" -- are currently available on DVD.

Poll administrator Dennis Lim noted that, compared to 2006 when "the relative dearth of truly exciting films" was lamented by many critics, this year's 106 participants were more enthusiastic about their choices. One eyebrow-raising development was cited in the indieWIRE introduction, though:

If there is a strking hole to be found in this year's [poll results]... it is the utter lack of American indie films. While last year's survey celebrated outside-the-system films such as David Lynch's "Inland Empire," Kelly Reichart's "Old Joy," Ryan Fleck's "Half Nelson" and Andrew Bujalski's "Mutual Appreciation," the acclaimed new films from American filmmakers this year came from directly within the Hollywood and Indiewood system, starring name actors.

Other poll-toppers: Best First Film (Sarah Polley, "Away from Her" (2006)), Best Documentary ("No End in Sight," Charles Ferguson), Supporting Performance (Cate Blanchett, "I'm Not There" (2007)), The complete results in all the categories can be scrutinized here. And the individual critics' ballots (including mine) are here.