A few weeks ago, the Hollywood trades were observing (or complaining) that, because of the 2008 presidential election, all the big studio Oscar-bait films had been pushed back into December. I mean, how are mere movies going to compete with that cast? "Obama. Biden. McCain. And Sarah Palin as Jaws." 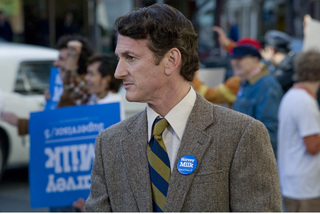 This year, it's anybody's guess. "Slumdog Millionaire"? "Milk"? "Wall-E"? Something that hasn't won a critical consensus honor yet? (Right now my hunch is that the National Society of Film Critics will wind up going for either "The Wrestler" or "Wendy and Lucy." Just a hunch.)

UPDATE: The Hollywood Foreign Press Association, bestower of the Golden Globules, has announced its nominations... and even with a total of ten best picture slots (in Drama and Comedy/Musical categories) it overlooked "Milk," "The Wrestler" and "The Dark Knight," all of which seem to me like fairly obvious Globuley-Oscary pictures. Sean Penn, Mickey Rourke and Heath Ledger all got acting nods, though. Go fig.

There will be lots to see between now and New Year's Eve -- and I still haven't caught up with "Milk," "Happy-Go-Lucky," "I've Loved You So Long," "Ballast," "Rachel Getting Married," "Vicky Cristina Barcelona" -- all of which have already opened theatrically. Still to come: "The Curious Case of Benjamin Button," "Frost/Nixon," "Revolutionary Road," "The Reader," "The Wrestler," "Doubt," "Seven Pounds"... none of which, however, have made much of an impact with critics groups.

The East Coast and West Coast critics have agreed on a few things here and there: Sean Penn in "Milk," Sally Hawkins in "Happy-Go-Lucky," Penelope Cruz in "Vicky Cristina Barcelona," "Man on Wire" for documentary, but... well, see for yourself:

Foreign language film: "4 Months, 3 Weeks and 2 Days" (considered a 2007 release by many critics last year, including the National Society)