"Turbo" is just strange and lively enough to make you wish it were better.

This DreamWorks animated picture has an appealingly bizarre premise—a racecar-crazy snail (voiced by Ryan Reynolds) dreams of competing in the Indianapolis 500—and its sense of humor is so odd that at times you wonder if the movie is savaging the very cliches that it would not exist without. If only.

There's a "Rudy"-like hero Theo, aka. Turbo, who studies old VHS cassettes of Indy 500 races and tries to get his time up to maybe one meter per day. There's Theo's brother Chet (Paul Giamatti), who works at "the plant" (a tomato garden) alongside Turbo and cautions him to put aside his unrealistic dreams. He ends up helping him achieve them after Turbo gets pulled into a street racecar's engines and granted magical powers through a process I don't understand, and am probably not meant to. There's also a team of misfit (and multiracial, if only by voice and body language) pals who spark Turbo's enthusiasm and rally to his defense: the volatile Whiplash (Samuel L. Jackson), the flirtatious and saucy Burn (Maya Rudolph), the jocular Smoove Move (Snoop Dogg), and White Shadow (Steve Bell), a big mollusk who has but one catch phrase and uses it even when it doesn't make any sense. There's an enthusiastic human dreamer, too—a beefy kid named Tito (Michael Peña)who adopts our snail hero and makes his freak-of-nature speed the centerpiece of a PR plan. Tito operates Dos Bros Taco Stand with his older brother Angelo (Luis Guzman). Their relationship mirrors Turbo and Chet's in ways both large and small.

There are a lot of touches like these—touches that suggest that director David Soren, his cowriters Robert Siegel and Darren Lemke, and his animators, artists and sound designers have tried to trick-out a factory-issued vehicle with custom decals, gladiator rims and neon lights. The film's dialogue is smarter than it needed to be to pass muster with families who aren't looking for art so much as decent focus and comfortable seats. I like how Turbo tends to "lawyer" the other characters' insults and proclamations, pouncing on grammatical errors and contradictions, tweaking them so subtly that they aren't always sure if they've been tweaked. ("Your trash talk is needlessly complicated," Whiplash warns him.) Some of the running gags verge on satire, such as the acidic portrayal of Turbo's hero, the preening, callous racing champ Guy Gagne (Bill Hader), and a crazy action sequence near the midway point in which the snails seem to be surfing on power lines while House of Pain's "Jump Around" blasts on the soundtrack. The film is never more aware of its own absurdity than when Turbo successfully enters the Indy 500 and his talking snail brother shrieks, "Has the whole world lost its mind?"

The voice casting and some of the humor leave "Turbo" open to charges of insensitivity. These buddy snails are coded "ethnic", and contrasted with Turbo and Chet's more stereotypical whitebread attitudes. (Whiplash even mocks the newcomers for being backyard snails, more pampered and meek than street snails.) "Turbo" is the second blockbuster this summer (the other is "The Lone Ranger") to evoke "Dumbo." With his freakish powers, Turbo is the mollusk version of Disney's big-eared elephant; his brother Chet is as unsupportive of Turbo as Timothy the Mouse was supportive of Dumbo, but he sure does sound like him, thanks to Giamatti's lovable whine; Whiplash and company are the crows, shucking and jiving in service of the hero's inspiration.

This would be pretty offensive if the film didn't have such a comfortably urban sensibility. It's a "White people dance like this, black people dance like that" sort of attitude, presupposing that backyard snails need to loosen up and expand their horizons. To that end, the film evokes "The Fast and the Furious" series, "Pulp Fiction" and other multicultural touchstones with great affection, and stocks the soundtrack with imaginatively chosen hip-hop and rhythm and blues cues (including the Jackson 5's "Going Back to Indiana"). It even alludes to one of Jackson's most famous lines in a Quentin Tarantino picture—minus the profanity, of course.

That "Turbo" is pushing old coded buttons for a reason would be cause for celebration if the result weren't a slightly hipper gloss on the kid-flick usual. Gagne's catchphrase "No dream too big, no dreamer too small" sounds wonderful on paper, and you'd have no reason to expect a family-friendly blockbuster to subvert it if you hadn't already seen Pixar's unexpectedly clever and altogether superior "Monsters University" do exactly that. There's nothing new here, just old stuff in a new-ish package. This movie's enjoyable, but never as daring or bizarre as it could have been. It hits all the beats you expect it to hit, exactly when you expect it to hit them, while pretending to mock films that are all about the beats. 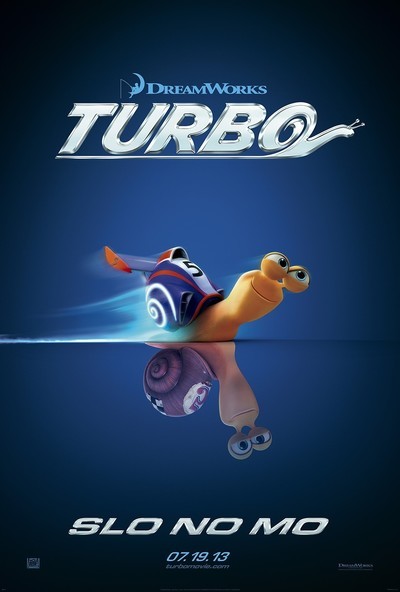