If you were worried that animation giant Pixar was dipping into the same old wells too often ("Toy Story 3," "Cars 2," et al), the announcement of a prequel to their 2001 hit "Monsters, Inc." might have given you pause. Luckily, the result is more than reassuring. "Monsters University", which pictures Billy Crystal's one-eyed goblin Mike and John Goodman's fuzzy blue scare-master Sully as students attending Scare U, is true to the spirit of the original film, "Monsters Inc.", and matches its tone. But it never seems content to turn over old ground.

The tale begins with a brief prologue establishing Mike as a young monster. He's not what you'd call a natural. He's a model student, one of those grinds who gets good grades but lacks that spark that marks the special talents. Sully, the big blue party animal Mike meets at college, is the opposite. He's the son of a family acclaimed for its multi-generational scaring ability, coasting through life on his name. But Sully's one of those guys for whom success only seems to come easily. When Mike and Sully try to enter the school's "Scare Program" by winning the annual campus scaring competition — to avoid getting roped into a "boring" career track, such as manufacturing scream canisters — their strengths and weaknesses become clear. Mike wants to be an all-time champion scarer the way a tiny, chubby kid wants to be in the NBA; there's hope for him, but not in the way that he thinks. Sully is Mike's opposite. He's lazy and a smart-aleck. He doesn't have as much imagination as some of his classmates assume, and he's so terrified of failure that he's turned underachieving into a kind of self-protective performance art. (The first time Mike meets him, Sully shambles into a class that's already in progress, sans pencil or paper.)

You'll notice that I've already said quite a bit about the two main characters, and I haven't even gotten to a summary of the plot yet. That's because Sully and Mike are such richly-drawn individuals, so fully imagined in terms of psychology, body language and vocal performance, that they feel more "real" than the live-action heroes in almost any current summer blockbuster you can name. This is a specific Pixar talent, and for all the goodwill that the company has generated over the years, they still don't get enough credit for it. Sully's thinner in this film than he was in the first one, and he has the jockish, meathead energy of the young Nick Nolte. Look at how he slouches semi-sideways in classroom desk chairs, or tilts his strong jaw while half-listening, like a man (er, monster) who was told as a child that he had a nice face and never forgot it. Look at Mike's schlumpy posture, his permanent-wedgie walk, and how he shrugs as if warding off blows that it hasn't occurred to anyone to deliver yet. These touches and others are marvelous, and they go a long way toward making the central relationship equal to, yet different from, Mike and Sully's friendship in "Monsters Inc."

The supporting players are just as vivid. Like characters in a classic Preston Sturges or Ernst Lubitsch comedy, they enter the film as caricatures and emerge as fully-formed individuals, the sorts of people (monsters!) that you'd remember fondly if you knew them in life. The members of Oozma Kappa, the uncoolest fraternity on campus — the only one that will take Mike and Sully — are a ragtag bunch, the classic underdogs of sports movie cliche, but they're physically bizarre, a gaggle of bouncy doodles. There's a seemingly permanent student with an upside-down bat wing for a mustache, a portly salesman who's older than some of the teachers. There's a spazzy goofball who's basically a pair of legs plus a face (he sure can breakdance, though). There's a two-headed fellow whose heads argue with one another (one head wants to be a dance major, the other doesn't). There's an entitled jock fraternity that tries to recruit Sully, with a self-regarding leader whose puffed-up chest and melon head dwarf his stick legs, and a super-competitive sorority full of giggly monsters who dress in pink and seem chirpy and harmless until you see their eyes light up with a hellish intensity that would frighten Medusa herself.

Lording it over everyone is the dragon-winged, centipede-bodied Dean Hardscrabble (Helen Mirren, in one of the best cartoon voice performances I've heard). She's a founding mother of Monsters University who designed the Scare Program and the scaring contest, which unfolds over several days in a variety of menacing and colorful settings. Hardscrabble seems to have been modeled on John Houseman in "The Paper Chase." She's an imperious, intimidating master instructor who brooks no fools, but she pays such close attention to every student's progress that deep down you know that her withering putdowns are a form of toughlove, a way of testing her charges and making sure they have thick skins, or hides, or scales.

"Monsters University" is the sort of film that's easy to undervalue. It's not deep, nor is it trying to be, but its goals are numerous and varied, and it achieves every of them with grace. If you've ever seen a sports picture, you know how things have to go, and the movie hits every beat you'd expect; but it never arrives via the most obvious route, and it's so attuned to the way modern audiences watch genre films that there are times when it seems to anticipate our objections and tease them out so that it can answer them later, to our satisfaction and delight. (When a moment feels a bit off, there's a reason for its off-ness.)

The script is filled with lines that are quotable not just because they're funny (though many are) but because they're wise, such as Mike telling Sully, during an inspirational trip to watch the professionals at Monsters Incorporated, "The best scarers use their differences to their advantage," and Mike's follow-up, a reaction to watching a legendary and now very old scaremaster do his thing, "He doesn't have the speed anymore, but his technique is flawless." My former colleague Manohla Dargis was right to object to Pixar's decision to tell yet another guy-centric story after releasing the quietly revolutionary "Brave" — but considering the warmth and intelligence radiating from every frame of this film, it's far from a dealbreaker. There's a decency and lightness of spirit to "Monsters University" which, in a time of tediously "dark" and "gritty" entertainment, is as bracing as a cannonball-dive into a pool on a hot summer's day.

Never do you get the sense that director Dan Scanlon, his cowriters, his voice cast, or his army of animators are putting our affection for the first film in the place of true creativity. Every moment contains five or six things worth admiring: a great line, a shameless but expertly timed sight gag, a swarm of marginal details, or a composition or camera move that connects the picture with the three genres it most often invokes, the coming-of-age tale, the campus comedy, and the sports picture. Randy Newman's drumline-saturated score recalls Elmer Bernstein's classic work on "Animal House" and "Stripes", but so subtly that it takes a moment to register what he's doing. There are times when the film is juggling so many different kinds of pleasure simultaneously that when it adds one more unexpectedly perfect touch, the whole scene seems to erupt like a string of firecrackers. (My favorite occurs during a wild infiltration-and-escape sequence, when a character you'd never expect to say such a thing shrieks, "I can't go back to jail!")

That the film may also teach children, and perhaps remind grownups, what it truly means to be honest, honorable, loyal and fair is a bonus, but to my mind a big one. When the characters take ethical shortcuts, they're punished in ways that seem quite reasonable, provided they get caught. If they don't get caught, their consciences do the punishing for them -- and the characters that obviously don't have consciences are the ones that the movie treats most harshly. The film's lessons are never self-congratulatory, and they're always backed by real empathy for human — or in this case, monstrous — frailties.

In its own sweetly laid-back way, this is perfect family entertainment. Pixar may not have the speed anymore, but its technique is flawless. 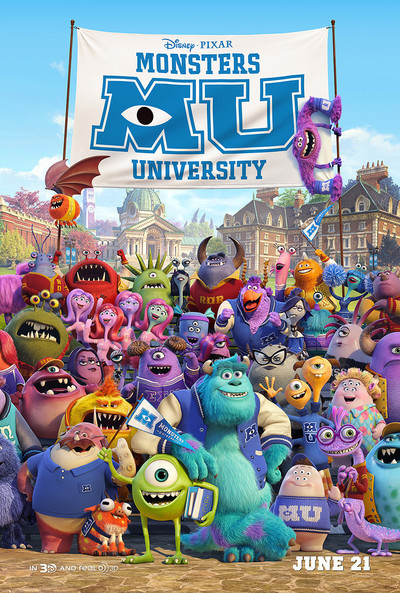