The Man Who Went Fast

Three cheers for Ricky Bobby -- the man, the myth, the name. The title of this pitch-perfect parody of an auto-racing biopic is "Talladega Nights: The Ballad of Ricky Bobby," but the racing hero's name is so great (and so much fun to say) that people are already just calling it "Ricky Bobby." The first time I heard the title character's nom de tube in "Anchorman: The Legend of Ron Burgundy," the previous collaboration between Will Farrell and Adam McKay, I laughed out loud. A 1970s local newscaster? What better name than Ron Burgundy? And now, a NASCAR driver? Ricky Bobby, of course!

And the way Sacha Baron Cohen, as Ricky Bobby's gay French nemesis Jean Girard, pronounces his name (something like "Yrikee Bubbee" may be the closest print equivalent) is, remarkably, funny every single time. If Cohen's Borat movie ("Borat: Cultural Learnings of America for Make Benefit Glorious Nation of Kazakhstan") is anywhere near as amusing as this one, a movie star is born. Er, "boorn."

As a biopic of a famous popular figure (following the Hollywood template of movies like "Walk the Line" and "Ray"), "Ricky Bobby" is flawless. It doesn't stand outside and make references to other movies; it inhabits the biopic formula all the way through -- even down to the slightly draggy stretch in the second act, before the big comeback.

There are the childhood scenes that have become part of the legend -- how young Ricky Bobby was born in the back of a speeding Chevy, to his first (and, for too long, only) words: "I wanna go fast." His shiftless, beer-drinkin', pot-smokin', ramblin' dad Reese Bobby (Gary Cole -- as good as he was in "Office Space") is, of course, mostly off cruisin' down the highway, so he's raised by his formerly wild-gal mom, Lucy (the magnificent Jane Lynch, from "The 40-Year-Old Virgin" and "Best in Show").

Ricky Bobby grows up to possess a winning record, countless corporate sponsors and endorsement deals, a big house, a driveway full of cars and boats, a Hot Wife (Leslie Bibb, as Carley Bobby), two trash-talking young sons, Walker and Texas Ranger (Houston Tumlin and Grayson Russell), and an enthusiastically subservient best friend and second banana Cal Naughton, Jr. (the always brilliant John C. Reilly), whose very name pegs him as a nothing. A Junior nothing.

Cal and Ricky Bobby nickname each other "Shake" and "Bake," to emphasize their partnership (Cal positions his car to help his team's star driver slingshot to victory), and because it's the most inane and unimaginative catch-phrase imaginable. It also utterly mystifies Girard, the Gitanes-smoking, Camus-reading racer in the Perrier car, while Cal and Ricky Bobby drive Old Spice and Wonder Bread, respectively. Running out of places to put sponsor logos, Ricky Bobby even sells his windshield to Fig Newtons.

The Bobbys live in a world where branding is everything, and product-placement infiltrates every aspect of their lives. Kind of like America in 2006. One endorsement deal stipulates that Ricky Bobby mention PowerAde at each grace -- which he peppers with other brand names and addresses to Dear Lord Baby Jesus, because he prefers the cute little baby one to the more hirsute adult version. This movie may be about dumb characters, but it's very smart about American sports, biopic movie conventions, and especially language. The writers and actors are in love with words -- how they sound, and what they mean, especially when they don't mean very much at all (as in most movie dialogue).

"Ricky Bobby" addresses generic clichés head-on, like when Ricky Bobby declares: "You gotta win to get love." Doesn't sound like much of a funny line on the page, but Ferrell makes it hilarious. Likewise, when he and Reilly try to explain Cohen's accent and compare it to a dog with peanut butter in his mouth, you realize that's exactly what he sounds like. And for Ferrell's "SNL" fans, there's a moment that may remind you of producer the Bruce Dickinson (Christopher Walken) in the immortal "More Cowbell" sketch (which Ferrell wrote). At the height of his fame, Ricky Bobby proclaims, matter-of-factly: "I wake up in the morning and I piss excellence!"

Ferrell and McKay (who also directed) have written together for a while, going back to "SNL." As they demonstrated with "Wake Up, Ron Burgundy: The Lost Movie" -- the 93-minute "alternative movie" on the "Anchorman" DVD, made up entirely of outtakes, and in the "Being There"-meets-Jackie Chan closing credits in "Ricky Bobby" -- they take a very smart approach to comedy. They shoot a lot of stuff, written and improvised, so they have plenty of funny footage in the can to choose from. Christopher Guest, whose movies are almost entirely improvised, does something similar, and many of those involved here are skilled at improv, sketch comedy, and stage work: Ferrell (The Groundlings, "SNL"), McKay (Upright Citizens Brigade, Second City Chicago), Lynch (Second City), Reilly and Cole (both Steppenwolf vets)... If you see the trailer, you'll see some funny stuff that isn't in the movie, but that might wind up on the DVD: "He Wanted to Go Fast: The Reprise of the Ballad of Ricky Bobby" (aka "Ricky Bobby 2: Elliptic Boogaloo").

Two more burgeoning stars require mentioning: Amy Adams, who was nominated for an Oscar last year in Phil Morrison's "Junebug," has a delightfully sexy turn as Ricky Bobby's assistant, Susan. And as Texas Ranger Bobby, red-headed wonder Grayson Russell shows an understanding of comic timing and delivery that actors four times his age would envy. I'm not sure how he does it, but he spices his performance with a self-aware intelligence that is way beyond most child acting. Indeed, he parodies the juvenile acting in mainstream movies at the same time that he's holding his own with the adults in the ensemble. This kid is funny.

Like "Little Miss Sunshine," "Ricky Bobby" is impeccably cast and performed, from the starring roles (Farrell is amazing, injecting a little of his George W. Bush into this speed demon) to small parts (like Molly Shannon as the team owner's sloshed wife). McKay serves his actors well by directing the picture straight. This is what "Days of Thunder" wanted to be -- only (intentionally) laughable. The racing stuff is quite convincing -- or at least as convincing as any event that involves indecipherable flashes of color streaking past the grandstands could. And no wonder -- it's photographed by Oliver Wood, who filmed both the "Bourne" movies and knows how to shoot action with automobiles. Even the elaborate CGI-assisted camera movements that take you from above the track down into the car, are just what you'd expect to see in a drama, and that makes them all the funnier.

And did I mention? Any movie that kicks off with a shot of the North Carolina moon and Roger Miller's "King of the Road" opens up a wide lead from the start. 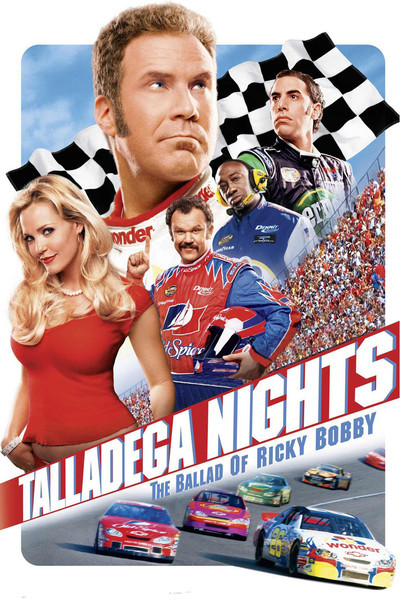 Will Ferrell as Ricky Bobby