Dwayne Johnson finally gets a star to match his size if not charisma in the sometimes gloriously ludicrous “Rampage,” a movie based on a hit arcade game that was literally just larger-than-life monsters bashing buildings. If you’re thinking, “Wow, that seems like a flimsy premise from which to adapt a feature film,” you’re not entirely wrong. Directed by “San Andreas” helmer Brad Peyton, this CGI blockbuster is often a defiantly stupid movie, most comfortable with what it’s trying to accomplish when giant monsters are destroying half of downtown Chicago or leaping on moving helicopters. It’s the narrative tissue in between that allows the movie magic to falter every now and then. However, when Johnson is doing that movie action star thing he does so well and giant animals are going enormous-mano-a-enormous-mano, there’s undeniably goofy fun to be had. You just have to be patient during the downtime.

“Rampage” opens by establishing its ridiculous tone early. A scientist on a space station is struggling to save some genetically engineered samples from, well, a mutated super-rat. The station is on fire, and everyone else appears dead, but she’s ordered to save the science. Yes, “Rampage” opens with a super space rat aboard an on-fire spaceship hurtling to Earth. It’s certainly a tone setter.

The samples plummet to Earth, and land in three locations. One happens to hit ground in a San Diego Wildlife Sanctuary managed by Davis Okoye (Johnson). Davis’ favorite beast is a giant albino gorilla named George, and the clever animal happens upon one of the genetic samples. Before you know it, George is growing at a never-before-seen rate, accompanied by increased aggression and insatiable hunger. He kills a bear, escapes, and, well, lots of things go boom. That’s why you come to a movie like “Rampage”—to see and hear things go boom.

A critical caveat seems appropriate here: I dig giant monster movies. I still awe at the 1933 “King Kong,” a movie that I consider among the most important ever made. I even dug Peter Jackson’s 2005 remake, as well as recent iterations of the King of the Monsters both in Gareth Edwards’ 2014 American version (“Godzilla”) and Hideaki Anno & Shinji Higuchi’s 2016 Japanese version (“Shin Godzilla”). There’s something about the spectacle of movies like “King Kong” and “Godzilla” that’s singularly cinematic—it’s not something that other forms like theatre, TV, or fiction can do in quite the same way. Add this appreciation for big creatures slamming into buildings with my belief that Dwayne Johnson is one of the few current working actors we can legitimately call a ‘movie star’ and “Rampage” should be a slam dunk. I even played the arcade game!

So, why isn’t it a slam dunk? Sure, there are times when “Rampage” gives viewers exactly what they were hoping for when they opened their wallets or whipped out their MoviePass. No one can really accuse this movie of not delivering on what was in the trailers (although one could argue the whole movie is in those trailers). So why isn't it the "King Kong Meets the Rock" it could have been? First, the film seriously muddles its vague attempts at emotional undercurrents. Davis mentions early on that he likes the company of animals more than people, but to say he has no actual character would be an understatement (George is actually more developed). And Naomie Harris’ eventual sidekick Kate has an emotional back story that’s designed to make her more accessible but really just falls flat—a scene between the two when they share their pasts, including when Davis found George and saved him from poachers, is embarrassingly mishandled.

But nothing sinks the film more than Jake Lacy and Malin Akerman’s villains, the nefarious siblings who run the evil company doing evil science things and making evil big animals and more evil stuff. They sometimes sound like they were written as over-the-top caricatures—Lacy’s Brett actually says, “There’s a reason we were doing these experiments in space!”—but the characters/performances are so bland that the movie sags every time they show up. More fun are Joe Manganiello’s soldier of fortune and Jeffrey Dean Morgan’s ‘OGA’ (Other Government Agency) Officer. Morgan delivers every line with a cocked neck and Southern side-eye that hints he knows how goofy this whole thing truly is, or at least should be.

Morgan’s having fun, for sure, and Johnson is charismatic, but Peyton too often struggles to convey that "big monster movie" sense of excitement cinematically. Even when “Rampage” gets to the fireworks, it feels like it’s too often going through the motions. There are just enough “big” beats—a giant wolf leaping at a mid-air helicopter, George using tanks like toys on Michigan Avenue, all the animals climbing the will-always-be-known-as-to-me Sears Tower—to keep fans engaged, but monster movies should do more than just keep you engaged. They should wow. They should fascinate. They should strike the imagination in such a way that they allow things like cheesy dialogue and thin characters to not only be critically dismissible but downright preferable. “Rampage” never quite gets to that point where you can consistently ignore the things it does wrong, and that can be deadly for a movie about animals the size of apartment buildings. It’s a tonal balance that “Rampage” only sometimes hits. Maybe they’ll perfect it in time for “Dig Dug.” 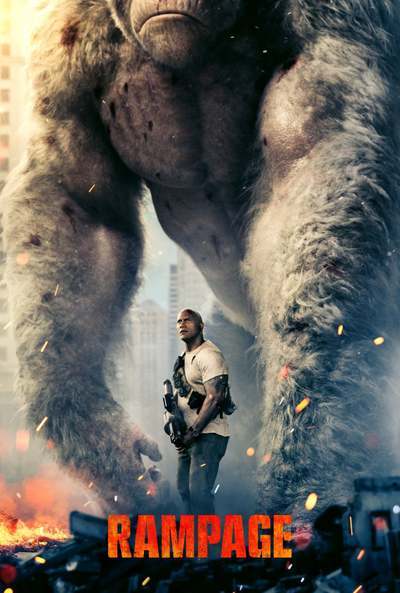