In a match between a supremely catastrophic California earthquake and the former wrestling star turned movie action hero Dwayne Johnson (a.k.a. The Rock, aptly enough here I guess, although he’s not thusly credited), who are you going to bet on? For movie purposes, the latter, of course. Since we’re all agreed on that, I suppose it spoils nothing to inform you that there’s almost nothing surprising about “San Andreas.”

Kind of noteworthy, if not actually remarkable, then, is that the movie actually works as well as it does, offering up suspense set pieces that are genuinely suspenseful despite one’s security that everyone in the top-billed cast that we’re supposed to care about will be okay. The direction by Brad Peyton is particularly effective during the brisk scenes of disaster, from the felling of Hoover Dam to the snapping of the Golden Gate Bridge. I’m not sure whether it was the editing or my own willing suspension of disbelief but the CGI-manufactured scenes of mass destruction are among the most realistic in this mode I’ve ever seen.

Spectacles of disaster have been a staple of movies ever since they began, so I’m not one to complain about them, or to snicker at the supposed irony of Hollywood so blithely exploiting a potential reality (for all I know, the data spouted by a seismologist played by Paul Giamatti in the film’s early scenes could be 100 percent true, and California is in fact overdue to tumble into the sea) for our entertainment value. The personal story attached to this earthquake saga has Johnson’s Ray Gaines, an uber-competent (of course) helicopter rescue dude, saving both his estranged wife and their college bound daughter from the tectonic destruction. Think “Earthquake” meets “Towering Inferno” meets “Die Hard,” but a lot more streamlined. Ray’s wife, Emma (Carla Gugino) has taken up with another fella, extremely rich architect Daniel (Ioan Gruffud), the latter of whom is escorting daughter Blake (Alexandra Daddario) to San Francisco. Plot logic dictates that one of these characters turns out to be a weasel, and the one you expect is the weasel indeed, and to top it off he’s got a really bitchy sister too. While disaster movies of past eras let the viewer build up a nice head of disdain for their weasely characters before suitably dispensing with them, “San Andreas” is both too fleetly action-packed and too damn nice to provide many hisses. Instead, the movie compels Johnson and Gugino to play dodge-em with falling buildings via chopper, mediate some super-size potholes in a four-by-four, do some impromptu sky-diving when there’s suddenly no viable airport runway to land a small plane on, and much, much more.

In the meantime, her-father’s-daughter survivalist Blake, with two young British fellows who seem to have been outsourced from a discarded Richard Curtis script, navigates the city by the bay, which the earthquake has turned into a kind of anti-funhouse: moving sidewalks, falling power lines, and shooting flames all dodge their tracks. And this is even before the tsunamis come into play. How will Ray and Emma find their girl, and will finding their girl help them resolve the tragedy in their backstory that drove them apart to begin with? As I mentioned earlier, there are really no surprises here. But the action is bracing, Johnson’s performance is solid and, within its extremely narrow parameters, entirely convincing, and Gugino and Daddario are both gritty and attractive. The result is a pretty exemplary popcorn movie. 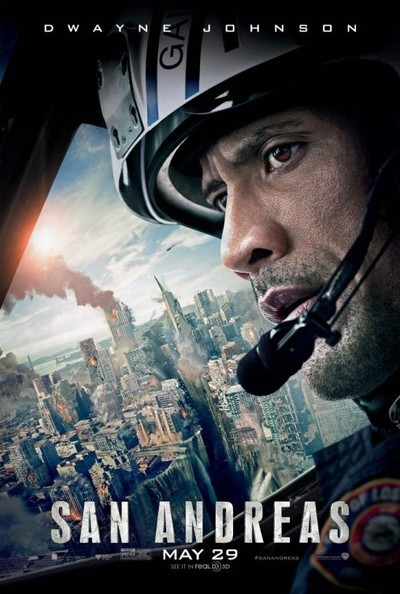 Rated PG-13 for intense disaster action and mayhem throughout, and brief strong language