The title of the Japanese monster movie "Shin Godzilla," an idiosyncratic take on the kaiju monster, can be interpreted in a few different ways: "New Godzilla," "True Godzilla" or "God Godzilla." "God Godzilla" seems most fitting since "Gojira," originally a combination of the Japanese words for "gorilla" and "whale," is translated by the film's characters as   "God Incarnate."

"Shin Godzilla" is a reboot, marking the first time that the Japanese military—or the world at large—have ever encountered Godzilla. In this version, the American government is responsible for dumping nuclear waste that an extinct lizard then feeds off of. But "Shin Godzilla," the first Japanese Godzilla film since the deliriously kitschy 2004 battle royale "Godzilla: Final Wars," treats the monster as both a god and an act of God: He's here, and he must be dealt with regardless of who made Him.

"Shin Godzilla" is, in that sense, about damage control. There are singular heroes, like Disaster Prevention bureau analyst/leader Yaguchi (Hiroki Hasegawa) and consulting biologist Ogashira (Mikako Ichikawa). But for the most part the film's human-driven segments are walls of dialogue/consultation between various superintendents, supervisory committees, ministers, scientists, bureau chiefs and cabinet secretaries. Politicians scramble to take care of their end of the Godzilla situation regardless of their reasons. Some are careerists looking to get ahead. Others are civil servants looking to serve the public. Writer/co-director Hideaki Anno (creator of the anime cult classic "Neon Genesis Evangelion") makes it easy to tell which characters are the real good guys are and which are ineffectual bureaucrats. But every human politician must work together to stop Godzilla regardless of their intentions or skill sets. There's no "I" in this team.

Like a quasi-Aaron Sorkin-esque civics lesson that happens to be about a giant monster, "Shin Godzilla" is about how the really good politicians are accountable for their actions, a message that American politicians should heed. And it's about adaptability, which we see when we look at the new creature design for Godzilla. The last shot of the film is an admiring shot of Godzilla's monstrous tail. Rapidly evolving from a belly-crawling, moray-esque sea creature into the dinosaur-like creature we know and love, this Godzilla is in a constant state of flux. His arms grow bigger before our eyes, and he stops breathing through gills once he reaches land. Like the xenomorph in "Alien," this Godzilla, a computer-generated special effect performed by a real actor in a motion-capture suit, is referred to as "a perfect organism surpassing man." In order to stop him, Japan's leaders must evolve with Godzilla. This movie is a response to the Fukushima nuclear disaster, but only indirectly. It concerns the lessons that politicians can learn from such a nuclear disaster and how they can move forward with a minimum of finger-wagging and chest-thumping.

By now I'm sure you can tell that "Shin Godzilla" is different than other Godzilla films. It's probably drier, and more dialogue-centric than fans may want. But Anno and co-director Shinji Higuchi's (anime/manga hit "Attack on Titan") idiosyncratic emphasis on the endless discussions and politicking that precede the Japanese military's involvement is genuinely exciting. Their vision of the character is thoughtful and clever without straying too far from the Godzilla formula established in films like the original 1954 "Gojira." Fans of what Godzilla have become might be upset to see Godzilla treated like a villain again, after years of seeing him fight against less sympathetic "kaiju" monsters like Hedorah, Biollante and Gigan. But they should be excited at the thought of seeing a modern monster movie that isn't just the same ol', same 'ol.

"Shin Godzilla" reassures fans that their version of Godzilla is, unlike the equally tremendous 2014 American "Godzilla," the "true" Godzilla, by including and expanding on themes from "Gojira" composer Akira Ifukube's iconic score. These are pieces of music that Ifukube previously expanded over the course of his decades-long tenure as Godzilla's official composer. "Shin Godzilla" composer Shiro Sagisu honors that tradition of adaptation with an orchestral score that feels simultaneously retro and modern. Sagisu, one of Anno's collaborators on "Neon Genesis Evangelion," alternates the tempo of his music from bombastic, "Dies Irae"-style battle themes to rococo, John Barry-esque spy music (complete with snare and bongo drums). Sagisu's score makes "Shin Godzilla" feel perpetually dynamic, even when parts of it devolve into discussions about relief bills, urban evacuation and the planning of military actions.

Anno's dialogue infrequently suffers during exchanges where he distinguishes the good humans from the selfish ones, especially scenes involving the bratty Japanese-American diplomat Kayoko (Satomi Ishihara). But these tiresome conversations are ultimately negligible, and for the most part the pacing of Anno's wall-of-dialogue style, cross-cut conversations ensures that "Shin Godzilla" never slows down long enough to feel boring. One person speaks, and then another person—not necessarily in the same room or even the same part of the city—responds with their own concerns, followed by another, and another.

"Shin Godzilla"'s action scenes are satisfying, though relatively sluggish and stylistically sedate compared to the set pieces in the 2014 "Godzilla." In fact, Godzilla stands still in many scenes. He takes punishment because he knows humankind isn't a threat to him. But shouldn't watch "Shin Godzilla" for Godzilla alone. He's not really the star of the film—Yaguchi and the rest of his human adversaries are. They credibly resist the end of the world with ingenuity and teamwork, making "Shin Godzilla" just as winningly optimistic as it is pleasurably eccentric. 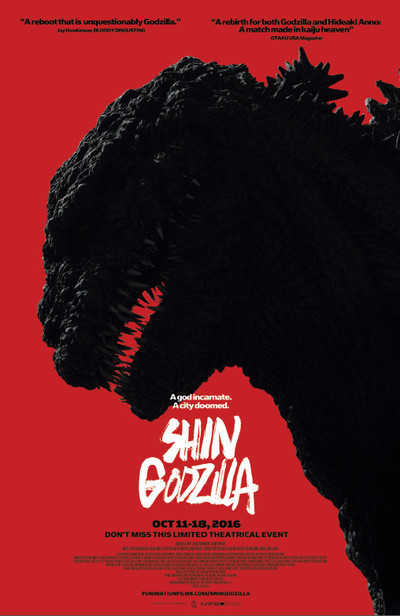