Poly Styrene: I Am a Cliché

The voices of punk rock, at least in its British iteration, could be divided into four categories: The Sneer (Johnny Rotten), The Mewl (Howard Devoto, Pete Shelley), The Harangue (Joe Strummer) ... and then there was The Bellow. The female bellow, to be precise, of Poly Styrene, born Marion Joan Elliott-Said, whose band, X-Ray Spex, threw down like nobody had before—or has since—with the debut single “Oh Bondage Up Yours!”

The song wasn’t a kink-shaming anthem. The opening lines are “Some people think little girls should be seen and not heard/But I think ‘oh bondage, up yours!’” Followed by a tumult of blaring sax, grinding guitar, and the usual kit-thrown-down-the-staircase drums. Each X-Ray Spex single that followed—song titles included “I Am A Poseur,” “Identity” ("is the crisis can’t you see!"), “The Day The World Turned Day-Glo”—felt like an urgent bulletin from the UK division of Youth In Revolt, and Poly Styrene, a woman of color with braces on her teeth and often dressed in boxy, neon-colored vinyl, was the ultimate labor leader for punk rock misfit toys. She, and her band, were continuously exhilarating. For about a year and a half. Which was arguably part of the point. But ...

The voice that kicks off this documentary is not a bellow but a soft one. It’s the voice of the movie’s co-director Celeste Bell, the daughter of Poly Styrene. Born in 1981, soon after the end of the clamorous madness of the punk movement, Bell hardly had a serene upbringing. Was Poly a good mother? Celeste answers the question by imagining how Poly herself—the singer died in 2011, only 53 years old, of cancer—might have responded: “A good mum? How banal. How mundane.”

Bell is a presence throughout the movie, seated in lotus position in front of a seamless white background, addressing the camera directly. This is not a banal or mundane fake-objective music history doc: it’s an almost real-time chronicle of a daughter coming to grips with a mother’s legacy.

Which isn’t to say it doesn’t give an account of the time and the movement. The film is frank in addressing the sexism that Poly endured in the circle of the Sex Pistols, and the racism she dealt with everywhere else. It highlights fellow female voices like Pauline Black, Vivian Goldman, and Styrene’s early bandmate Lora Logic, who left the band—not entirely amicably—after “Oh Bondage” and reconnected with Styrene years later at a Hare Krishna ashram in India.

Yes—after a residency at New York’s CBGB, Styrene saw a U.F.O. that advised her to “give up the electric and plastic way of life.” She changed her residence, her lifestyle, and her music. Her daughter eventually balked. The estrangement lasted years.

Beset by mental health issues, Styrene was “sectioned” in a hospital where she was misdiagnosed as schizophrenic; she in fact had a bipolar disorder. Her pain was passed down to Celeste. “She pushed me down the stairs once, and I never let her forget it. She wasn’t in her right mind of course. But I blamed her for ever bringing me into the world.” This restless film is hardly content to present a portrait of an icon, instead insisting, with compassion and clear eyes, that icons are all too human too.

Playing tonight, February 2nd, for one night only in theaters; available on digital platforms on February 4th. 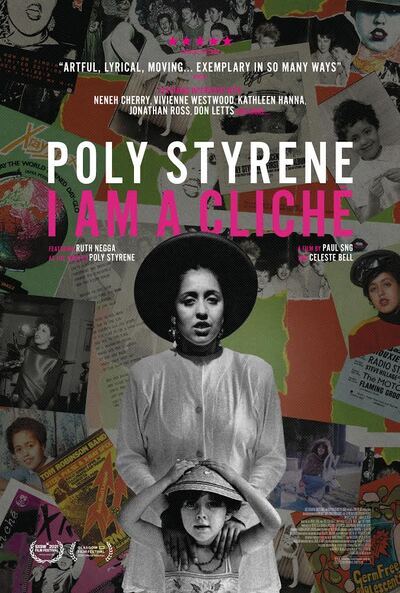 Poly Styrene as Herself (Archive Footage)

Neneh Cherry as Self

Bruno Aleph Wizard as Self

Kathleen Hanna as Self

Thurston Moore as Self

Vivienne Westwood as Self

Don Letts as Self

Jonathan Ross as Self

John Robb as Self

Vivien Goldman as Self

Tony Wilson as Self (Archive Footage)

Rhoda Dakar as Self

Lora Logic as Self (Archive Footage)