The presentation of Abel Gance's "Napoleon" is one of the great entertainment events of the 1980s, and the logistics of the event are little short of miraculous. This epic silent film, which was shown first in Paris in 1927 with Charles De Gaulle sitting attentively in the audience, very nearly was lost forever.

Made just at the end of the silent film era, it was hailed as a masterpiece but dismissed by exhibitors as too long, too impractical to be shown. It was cut into shorter versions by Abel Gance and others. Whole scenes disappeared and were presumed to be lost. The film became a legend, much talked-about, never seen.

And yet (this is the miracle) a virtually fully restored print of "Napoleon" plays this weekend and next at the Chicago Theater. It will be shown as it was intended to be shown, on a giant screen in a great movie palace. And in the orchestra pit, conducting his own original score for the film, Carmine Coppola will lead some 60 musicians and the theater's mighty Wurlitzer pipe organ in accompaniment.

It is also, no doubt, something of a miracle that the theater is nearly sold out, at $10 to $20 a ticket (some tickets remain for next weekend). This is the kind of film that needs showmanship as well as restoration, and it found its two angels in Kevin Brownlow and Francis Ford Coppola.

Brownlow is the British film historian who tracked down the missing footage of "Napoleon" in the world's film archives, and who worked with Gance, now 92, in supervising the five-year task of reconstructing the film. Coppola is the American producer-director who correctly bet that audiences would be intrigued by a spectacular presentation of a silent classic with full orchestral support.

He commissioned his father, Carmine Coppola, to compose the score. Carmine is a longtime musical director for Broadway shows, and the Oscar-winning composer of the music for his son's "Godfather" films. His score for "Napoleon", which I heard last winter during a performance at Radio City Music Hall, is just the sort of music this film needs: bravura, filled with energy, unabashedly romantic, not at all shy about quoting the "Marseilles" at every appropriate opportunity.

For almost all members of a modern movie audience, this showing of "Napoleon" will represent a first-time experience at seeing a silent film with a live orchestra. It was for me, and it was a glorious experience. The vast size of the image and the great authority of the orchestra combined to liberate "Napoleon" from the limitations of realism. One thing we members of the talkie era forget is that characters in a talking movie are forced, by and large, to speak in everyday language or risk sounding ridiculous. And their realistic speech tends to anchor the movies themselves in the realm of literal possibility.

Gance's "Napoleon" has no such limitations. The movie boldly uses symbolism, highly dramatic cross-cutting, spilt-screen images and special effects to pound us over the head with its fantasy and idealism. One scene uses special effects to show the French Senate literally tossing like ocean waves; it is edited to parallel Napoleon's survival of a tempest at sea.

Scenes like that got spontaneous applause when I saw the film at Radio City Music Hall. Some critics have asked themselves, not unfairly, whether the audience might have been applauding the very fact that Gance was able to achieve his effects In 1927: It's not so much what he does, the argument goes, as when he was able to do it.

That's a good question. The film ends, for example, with a spectacular three-screen, three-camera triptych that represents the first use of the principle later adapted as Cinerama. Do we applaud because of Gance's technical achievement? In this case, I think not. As Napoleon surveys his literally thousands of troops and then rides on horseback across the entire sweep of three screens, I think I felt not simply technical admiration but a true, surging sense of wonder: There are many images in "Napoleon" that are so grand, so filled with the creative exuberance of their maker, that we're swept up in spontaneous enthusiasm.

Movies have become romance, history, drama, fantasy and realistic portraits of life. But before they were anything else, they were spectacle. The very fact that they had been made, that they presented images to us that were not actually present, was reason enough to go. And from pure spectacle, they developed inevitably into spectacular epic, most importantly in Griffith's "Birth of a Nation" in 1915.

What Griffith began, Gance concluded 12 years later. "Napoleon" is the last great silent epic. We will not see its like again. What is wonderful is that we can see it at all. 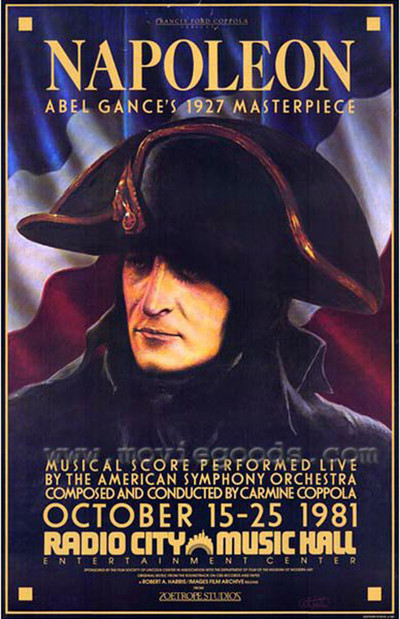 Vladimir Roudenko as As a boy