In this romantic drama, based on a best-seller by a female author that has been devoured by hordes of female readers, a filthy-rich 30-ish man who has shut down his emotions forms a relationship with a fetchingly unsophisticated, younger woman of modest means who is willing to tend to his needs. What starts off as strictly a business proposition eventually grows into a more personal and cozier connection.

You and your dirty mind are probably thinking “Fifty Shades of Grey,” right? Now think again and replace the explicit kink with lovey-dovey canoodling and all that bondage gear with a wheelchair. What you have is “Me Before You,” an exercise not in S&M marathons but an almost completely chaste wallow in sob cinema, the Hollywood prototype of which is “Love Story.”

Luckily, many of the plot’s maudlin pitfalls are greatly mitigated by the film’s utterly infectious leading lady. Emilia Clarke’s performance is winningly immersed in charming gawkiness and heartfelt sincerity while sporting a deliriously kitschy wardrobe heavy on eye-popping primary colors and loud butterfly prints. So much so, it might put you in mind of when you first witnessed the blinding incandescence of Julia Roberts' widescreen-ready smile or the delicate allure of Keira Knightley’s cameo-locket features.

Of course, “Game of Thrones” devotees have long been bowing down before this British actress and her impressive display of bewitching bad-assery as the silver-haired dragon-keeper Daenerys Targaryen. But she hasn’t quite broken through on the big screen yet. Instead, she proved all too capable of being as forgettable as anything else in last summer’s “Terminator Genisys” as the young Sarah Connor.

But only those who are allergic to adorable clumsiness and dewy-eyed sincerity will be able to resist Clarke as Louisa, a sheltered small-town girl with a big personality, too few ambitions and deep concerns for her family’s economic welfare. She even has a unique secret weapon: A set of incredible dancing eyebrows that appear to be under the spell of a snake charmer.

We all should be thankful—save, perhaps, those who voted her Esquire’s Sexiest Woman Alive last year—that Clarke turned down starring in “Fifty Shades of Grey” (too much nudity) and waited for this opportunity. To be fair, there of echoes of many other more edifying sources—“An Affair to Remember,” “Pretty Woman,” the French import “The Intouchables”—that reverberate through this “Beauty and the Beast” fantasy as it unfolds in a quaint English village. That the struggling working-class town’s picturesque views are dominated by a massive castle further enhance the sense that this is a contemporary fairy tale.

Ensconced in said fortress in his own stylish yet sterile bachelor pad cocoon is 30-ish Will Traynor, who once was a dashing financial whiz, devotee of extreme sports and bon vivant lover of ravishing women before he was left a quadriplegic two years earlier after a traffic accident. As played by Sam Claflin (Finnick Odair in “The Hunger Games” franchise), Will is initially toxic, filled with resentfulness and bitterness over losing his once-wonderful life. He also struggles with chronic pain and finds little joy in existing anymore. That begins to slowly—very slowly—change once lovely Lou enters his world, after being hired by his concerned mother (Janet McTeer of “Albert Nobbs,” adding what layers she can to an underdone part) and father (played by a Charles Dance, a few degrees warmer than usual).

Lou is supposedly a caretaker, although she soon discovers that there is an affable male nurse about to handle the more medical-related and personal hygiene concerns. Instead, she is intended to be a ray of sunshine to dispel the storm clouds that lend to their son’s sagging spirits and boost his desire to live. With a considerable arsenal of withering sarcastic retorts at his surly disposal, Will puts up quite a defense. But one rainy day, he decides to watch a French DVD—“Of Gods and Men,” about Trappist monks living in war-torn Algeria—and the ice between him and Lou begins to melt after he learns she has never seen a subtitled movie before.

There are some roadblocks that aren’t as easy to overcome—such as Lou’s clearly incompatible long-distance-runner beau and the fact that Will learns his pre-accident girlfriend is engaged to marry one of his best friends. Then a rather dire agenda of Will’s is revealed, one that will not be exposed here though it is unfortunately treated with all the ham-fisted tentativeness of the worst of those Nicholas Sparks adaptations. This causes Lou to double down on making Will happy by taking him to Mozart concerts, heading to the racetrack and going on a swoony trip to Mallorca. Do they fall for each other? Mais oui.

But given that the film’s catchphrase is “Live boldly!,” it’s a shame that "Me Before You" didn’t take a bolder and more honest route in its adaptation of the novel by Jojo Moyes, who also wrote the screenplay. Still, if this flick helps Clarke get ahead in the movie biz, it has done at least one thing right. 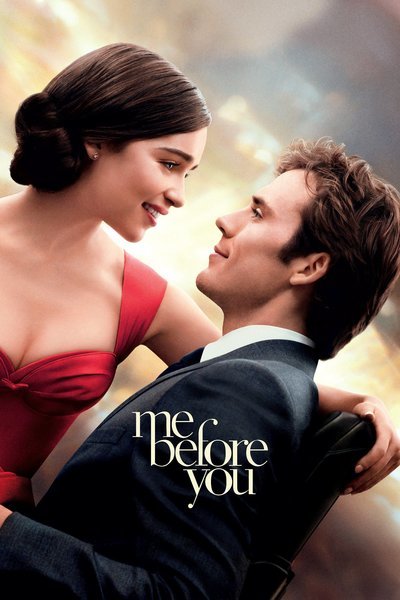 Rated PG-13 for thematic elements and some suggestive material.

Sam Claflin as William "Will" Traynor