Before Disney's 1991 film and long before the Beast started signing autographs in Orlando, Jean Cocteau filmed "Beauty and the Beast" in 1946, in France. It is one of the most magical of all films. Before the days of computer effects and modern creature makeup, here is a fantasy alive with trick shots and astonishing effects, giving us a Beast who is lonely like a man and misunderstood like an animal. Cocteau, a poet and surrealist, was not making a "children's film" but was adapting a classic French tale that he felt had a special message after the suffering of World War II: Anyone who has an unhappy childhood may grow up to be a Beast.

Those familiar with the 1991 cartoon will recognize some of the elements of the story, but certainly not the tone. Cocteau uses haunting images and bold Freudian symbols to suggest that emotions are at a boil in the subconscious of his characters. Consider the extraordinary shot where Belle waits at the dining table in the castle for the Beast's first entrance. He appears behind her and approaches silently. She senses his presence, and begins to react in a way that some viewers have described as fright, although it is clearly orgasmic. Before she has even seen him, she is aroused to her very depths, and a few seconds later, as she tells him she cannot marry--a Beast!--she toys with a knife that is more than a knife.

The Beast's dwelling is one of the strangest ever put on film--Xanadu crossed with Dali. Its entrance hall is lined with candelabra held by living human arms that extend from the walls. The statues are alive, and their eyes follow the progress of the characters (are they captives of the Beast, imprisoned by spells?). The gates and doors open themselves. As Belle first enters the Beast's domain, she seems to run dreamily a few feet above the floor. Later, her feet do not move at all, but she glides, as if drawn by a magnetic force. (This effect has been borrowed by Spike Lee.) She is disturbed to see smoke rising from the Beast's fingertips--a sign that he has killed. When he carries her into her bed chamber, she has common clothes on one side of the door and a queen's costume on the other.

Belle has come to the castle as a hostage. She lives at home with her father, two unkind sisters and a silly brother, whose handsome friend wants to marry her. But she cannot marry, for she must care for Poppa. His business is threatened, and he learns on a trip to a seaport that he has lost everything. On his way home, through a forest on a stormy night, he happens upon the Beast's castle, and is taken prisoner and told he must die. The Beast offers a deal: He can go home if he will return in three days, or he can send one of his daughters. The other sisters of course sniff and make excuses, and their father says he is old and nearly dead and will return himself. But Belle slips out and rides the Beast's white horse, which knows the way to the castle. And the Beast's first words tell her, "You are in no danger."

Indeed she is not. The Beast has perhaps intuited that a daughter who would take her father's place has a good heart. He tells her that every night at 7 he will ask her the same question: "Will you be my wife?" She shudders and says she will never marry him, but eventually her heart softens, and she pities him and sees that he is good. He gives her a magical glove that allows her to travel instantly between the castle and her home (emerging whole from the wall), and there is intrigue involving the key to the garden where his fortune is held. The sisters plot and scheme, but Belle of course prevails. Her father rises up from his deathbed, the Beast sinks into a final illness instead, and when she begs him to rally, his dying words are pathetic: "If I were a man, perhaps I could. But the poor beasts who want to prove their love can only grovel on the ground, and die."

Then there is another death, of the faithless family friend who wanted to marry her, and as his body turns into that of the Beast, the Beast comes back to life and turns into a prince who looks uncannily like--the dead friend. And no wonder, because all three--friend, Beast and prince--are played by Jean Marais. Odd, how appealing Marais is as the Beast, and how shallow and superficial he seems as the pompadoured prince. Even Belle doesn't leap cheerfully into his arms, but looks quizzically at her new catch and confesses she misses the Beast. So did Marlene Dietrich, who held Cocteau's hand during the suspenseful first screening of the film at a Paris studio. As the prince shimmered into sight and smilingly presented himself as Belle's new lover, she called to the screen, "Where is my beautiful Beast?"

Although he made many films, Cocteau (1889-1963) did not consider himself primarily a filmmaker but a poet; he also painted, sculpted, wrote novels and plays, and stirred the currents of the Paris art scene. His first film, the surrealistic "Blood of a Poet," was made in 1930, the same year as Salvador Dali and Luis Bunuel's notorious "L'Age d'Or." Both films were produced by the Viscount de Noailles, who delayed the release of Cocteau's after the other film inspired riots (Bunuel wrote of filling his pockets with rocks to throw at the audience if they charged the screen). Cocteau's film included images that became famous, as when a mirror turns into a pool of water, and when a mouth wiped off a painting affixes itself to his hand.

"Blood of a Poet" was an art film made by a poet. "Beauty and the Beast" was a poetic film made by an artist. He made it at the urging of Marais, his lover of many years, who was tall and imposing, with an extraordinary profile and matinee idol looks--a contrast to the skinny, chain-smoking Cocteau, whose months of shooting the film were made a misery because of a painful skin disease that required penicillin every three hours.

Because Cocteau was not sure he had the technical mastery for such an ambitious production, he recruited the director Rene Clement ("Purple Noon") as his technical adviser; the gifted cameraman Henri Alekan to handle the tricky changes between outdoor realism and indoor fantasy, and the theatrical designer Christian Berard to design the makeup, sets and costumes (his ideas were based on the illustrations of Gustav Dore). The costumes were so elaborate they were said to be "as much as the actors could stand up in." All of Cocteau's thoughts on this process are preserved in his journal,Beauty and the Beast: Diary of a Film,which shows him persevering despite his health. His entry for Oct. 18, 1945: "Woke up with unbearable pain. As I can neither sleep nor walk up and down, I calm myself by picking up this notebook and trying to shout my pain to the unknown friends who will read these lines."

We exist. His film has made us the friends. Watching it again tonight, I felt an unusual excitement. Its devices penetrate the usual conventions of narrative, and appeal at a deeper psychic level. Cocteau wanted to make a poem, wanted to appeal through images rather than words, and although the story takes the form of the familiar fable, its surface seems to be masking deeper and more disturbing currents. It is not a "children's film." Is it even suitable for children? Some will be put off by the black and white photography and the subtitles (brief, however, and easy to read). Those who get beyond those hurdles will find a film that may involve them much more deeply than the Disney cartoon, because it is not just a jolly comic musical but deals, as all fairy tales do, with what we truly dread and desire. Brighter and more curious children will be able to enjoy it very much, I suspect, although if they return as adults they may be amazed by how much more is there. 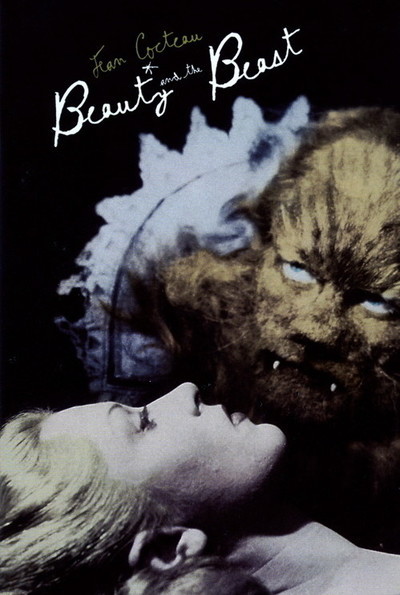