I know why you're reading this. And it isn’t for plot-description foreplay. So let’s just cut to the supposed heavy-panting stuff and get it over with, shall we?

In the annals of sexually-charged event cinema, ”Fifty Shades of Grey” barely lights a candle let alone combusts with unbridled forbidden passion. Nothing comes close to Michael Douglas and Glenn Close humping on the kitchen sink in “Fatal Attraction” or Marlon Brando’s inventive use of butter with Maria Schneider in “The Last Tango in Paris.” Even those ejaculating dolphin fountains in “Showgirls” were steamier than what shows up in this tempered version of E.L. James’ S&M rewrite of “Beauty and the Beast.”

That is, unless you wanted to learn how to re-purpose that peacock feather that has been lying around the house.

Consider the deflowering scene. I much prefer the one in “Ida,” Poland’s foreign-language Oscar contender, between a nun-in-training and a hot saxophone player (is there any other kind?) than the hype-escalated glossy bedroom encounter between a lip-biting virgin with a 4.0 GPA and her control-freak billionaire in “Fifty Shades.”

Could you guess that, despite her name, director Sam Taylor-Johnson is a woman? Yes, if only for the most telling and perhaps wisest omission. That is, much like the Ken doll he resembles, Doran’s manhood is kept discreetly hidden save for one fleeting and hardly revealing crotch-cam shot. Basically, the only body parts allowed to be erect are Johnson’s nipples, which are on display so much they probably required their own SAG cards.

The thinking behind this choice is likely that the majority of the millions of women who bought the pop-lit phenomenon would rather revel in the romantic fantasy of a brainy lass trying to tame a broken man than fixate on the sight of male genitalia in the flesh (especially since “Fifty Shades” is showing on a bunch of IMAX screens).  Before you argue otherwise, consider that 2011’s highly explicit “Shame” barely grossed under $18 million worldwide even though a gorgeous specimen like Michael Fassbender proudly flashed his shillelagh every chance he got.

There is, however, one move that did make an impression on me. When Johnson’s Anastasia Steele straddles the lap of Dornan’s Christian Grey while he is seated on a piano bench (with all of his mournful nocturnal ivory tickling, it’s as if De Sade and the Phantom of the Opera had a child together), he manages to use his bent arms like a forklift under her shapely behind, pick her up with ease and whisk her back into the boudoir.

Eventually we learn that instead of dating, Christian likes to recruit young women like Ana as submissives who willingly yield to his preferred brand of discipline in his high-rise home’s well-stocked hideaway, infamously known as the Red Room of Pain. But before we get to the kink, which takes up a surprisingly small amount of the running time, let’s address what Taylor-Johnson and company (including screenwriter Kelly Marcel, who wrote “Saving Mr. Banks,” also about another female haunted by a troubled man) get right.

Not only are all the awkwardly written source material’s gushy inane exclamations (“Holy crap!” is a regular) and silly references to our heroine’s Jiminy Cricket-like “inner goddess” nowhere to be found. It seems that someone realized how ridiculous the first meetings between awkward college student Anastasia and intimidating Seattle-based entrepreneurial whiz Christian are and decided to inject an abundance of humor heavy on loaded double entendres alongside a fair amount of tension.

Ana and the secretive businessman spark a cat-and-mouse pursuit when she steps in to conduct an interview for her college paper after her reporter roommate falls ill. Soon he appears at the folksy hardware store where she works, suggestively buying cable ties and masking tape, and shows up in the nick of time to save an inebriated Ana from an overly amorous male friend and letting her share his hotel room to recover. It doesn’t take long before her virginity is history and the game is afoot.

The film makes sure to include little details that might confuse the uninitiated but will delight the faithful. The phrase “Laters, baby!” The “Charlie Tango” helicopter balloon. The knit tie that Christian employs when he binds Ana’s hands for the first time and then later wears in public to excite her.

There are other cast members, some you might actually recognize–Marcia Gay Harden as Christian’s adoptive mother, Jennifer Ehle (best known as Elizabeth Bennet in the BBC miniseries adaptation of “Pride & Prejudice”) as Ana’s mom. But this is primarily a two-hander, which hits its entertaining peak during the infamous contract negotiation scene that involves Ana agreeing to Christian’s rules of submissive engagement and striking out those that displease her.

Ana, it turns out, is none too pleased with the idea of punishment as a turn-on. But if anyone is punished by “Fifty Shades,” it is the audience. By the time the screen goes black, leaving much unresolved and little in the way of a real climax, no one can blame those who loudly groaned after realizing they have to wait for the inevitable sequel for any sort of real satisfaction. 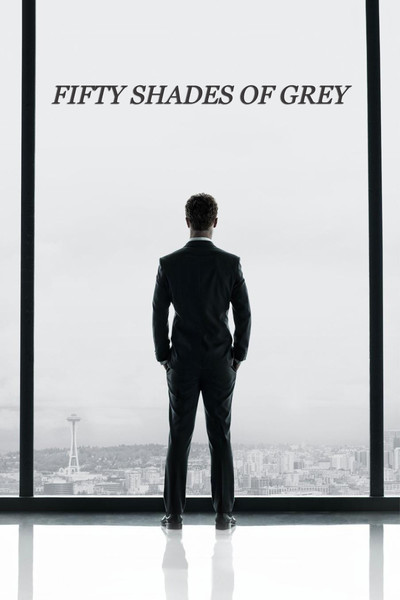 Rated R for strong sexual content including dialogue, some unusual behavior and graphic nudity, and for language