“I feel like people are puzzles. A piece of my puzzle is missing.” This is one of countless eloquent observations made by the young people unforgettably featured in Kevin Shaw’s “Let the Little Light Shine,” one of the year’s best documentaries. In this case, the words are uttered by Taylor, a student at the top-ranked elementary school, National Teachers Academy (NTA), located on Chicago’s Near South Side. She’s describing how it has felt for her to grow up without a mother, who died shortly after giving birth to her, leaving her grandmother Olive—to whom the film is in part dedicated—to raise the newborn girl. Yet Taylor’s observation could also apply to how she and her peers would feel as a result of the plan by Chicago Public Schools (CPS) to rob them of their enormously successful predominantly Black school by converting it into an integrated high school. Whereas the 49 Chicago schools shuttered in 2013, marking the largest mass school closure in American history, were dismissed as “underperforming,” NTA is anything but, and more importantly, it has formed a nurturing community in which its youth have found a place to thrive.

When Black and Latinx neighborhoods are reduced to mere statistics on the news, the work of documentary filmmakers is absolutely essential in placing a human face on the communities that are directly hurt by the dehumanizing impact of gentrification. On the heels of collaborating with Kartemquin’s Steve James on two of the greatest docuseries in recent memory—2018’s “America to Me,” for which he served as a segment director, and 2020’s “City So Real,” which he co-lensed—Shaw has made “Let the Little Light Shine” his first feature directorial effort since his 2010 debut, “The Street Stops Here.” Both films are portraits of devoted educators who understand the life-saving power of education and fight to save their schools from being shut down. Apart from being an explosively powerful and superbly crafted documentary, what makes Shaw’s new movie such a landmark is its first-hand account of a historic court ruling, namely Greer, Everette, Jones, Matthews and Chicago United for Equity vs Board of Education of the City of Chicago, with its crucial inclusion of a racial discrimination claim, a masterstroke courtesy of lawyer Candace Moore.

Those who may accuse this film of being biased should take note of the film’s final moments, which specify that CPS was approached with interview requests and did not respond to them, much to their detriment. However, Shaw does land interviews with people who make a persuasive case for why a high school is needed in the area, particularly Tina Feldstein, president of the Prairie District National Alliance (PDNA), who fashions herself as a Daniel Burnham-style “mover of people.” Yet what gradually becomes clear is that the overcrowding of the nearby South Loop Elementary School, which CPS is aiming to solve, is in part due to the refusal of parents to send their children to NTA. Amy Rome, former principal of NTA, recalls the racism displayed by parents who worked to prevent their children from intermingling with NTA students, while South Loop lawyer and resident John Jacoby argues that such behavior is more classist than racist. Regardless, the description of “dog whistling” provided by impassioned community organizer Niketa Brar reverberate throughout the picture, illuminating the ways in which coded language sends the message to children and their parents that Black students somehow cannot succeed on their own.

Working to earn the trust of a predominantly Black school, as a white instructor, involves a great deal of listening, engaging and putting forth effort to understand the culture of those you seek to educate. This truth, so potently illustrated in “America to Me,” is further embodied by former NTA principal Isaac Castelaz, who put his job on the line by agreeing to participate in Shaw’s documentary, knowing that the importance of his school’s fate outweighed that of his own employment status. He’s entirely candid about the mistakes he made during his “chaotic first year” at NTA, supplying students with pizza as an invitation to discuss a brawl that occurred outside the school, which inadvertently sent the message to kids that if they fight, they get pizza. The school ultimately gave Castelaz a second chance, and many of the film’s most touching sequences demonstrate how he’s created a familial environment at NTA that is designed to lift its students up toward realizing their potential. When a child squeaks through a musical performance at an assembly, Castelaz takes the blame for having him rehearse at short notice, while encouraging the audience to applaud him for his effort. The principal also makes time to work one on one with students such as Yaa, an introverted girl whom he gently coaxes out of her shell by empowering her voice. It’s all a part of his mission to teach kids that they will one day need to advocate for themselves outside of the classroom.

When I spoke to Richard Dreyfuss, who memorably played a music professor who molded generations of students in “Mr. Holland’s Opus,” he referred to teachers as “the last great heroes of our culture,” and you won’t find a better modern day example of why than “Let the Little Light Shine.” It cements Shaw’s status as a born filmmaker, with a camera that never intrudes upon the action while denying none of its subjects their inherent humanity. Though the tendency in this streaming era is to wait for documentaries such as this to arrive on an at-home platform, Shaw’s film provides an indelible reminder of cinema’s enduring power as a communal experience. If you’re fortunate enough to see this picture on a big screen with an engaged audience, you will be reminded of why we, as a species, go to the movies in the first place: to enter the lives of others and perceive the world through their eyes until our hearts have become intertwined with their own. With fascism posing a consistent threat to the future of democracy, here is an example of grassroots activism that manages to achieve what few had thought possible, while refusing to let the cries of the people be silenced. What a glorious sight to behold. 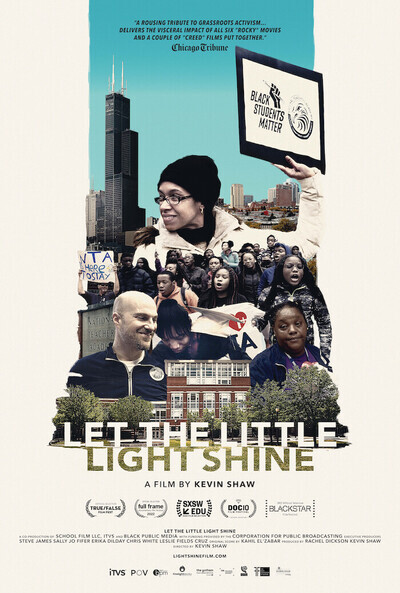