The problem with reviewing a stand-up comedy movie like “Kevin Hart: What Now?” is that I don’t have very much to tell you. From a visual standpoint, these types of movies are rather minimalist. There are shots of the comedian prowling the stage intercut with shots of the audience howling with laughter. I noticed one content soul wiping tears from his eyes, a clear sign he got his money’s worth at the Lincoln Financial Field venue where this film was recorded. Shots of women in these movies—especially Black women—are always the same mix of “you know that’s right” posturing and bemused looks at the trifling man she brought to the show.

I can’t tell you the jokes because I wouldn’t do them justice. I could talk briefly about editing choices and where the director puts the cameras, or maybe I could dish on the set design of the massive stage where the comedian plies his trade. But, at the end of the day, the only truly useful thing I can tell you is whether I laughed hard enough for you to invest your time and money. The star rating above informs you that yes, the jokes in “Kevin Hart: What Now?” are funny enough for a favorable review. You should go see it, especially if you’re a fan of Mr. Hart’s brand of self-deprecating observational comedy.

My work here is done. Thank you, America! Good night and God bless!

Um, hi. Me again. The stern but kind taskmasters here at Roger’s beloved site have graciously informed me of something called “a minimum word count." So I’ve got to come up with something else to discuss. Here’s where my mellow gets harshed, because I’ve such goodwill for the stand-up comedy portion of “Kevin Hart: What’s Now?” that I didn’t want to mention the uninspired spy movie skit that opens this film. It’s a chore to sit through, despite boasting Halle Berry, Ed Helms, Don Cheadle, car chases and faux-graphic violence that mocks Denzel Washington’s “The Equalizer."

Hart is a gifted comic actor, as the excellent “Central Intelligence” and the enjoyable “About Last Night” remake proved, but he’s given little to do in this section but kill time. As an ominous onscreen countdown clock reads “20 minutes til showtime”, we’re stuck with Berry arguing with Hart while Cheadle finds uses for the word “motherf---er” that he didn’t employ as Miles Davis in “Miles Ahead." The after-midnight Times Square audience I was with grew rightfully restless as we awaited the feature we came to see.

At least this skit is more seamlessly integrated into the film than the interminable one that opened “Kevin Hart: Let Me Explain.” It has a better ending too, with Hart being shot like a bullet through an opening in the stage at Lincoln Financial Field in his hometown of Philadelphia, PA. The crowd that enthusiastically greets him is the largest number of people to ever attend a stand-up comedy event. Director Leslie Small gives us an idea of the scope of such a feat; a shot from Hart’s perspective reveals the otherworldly glow of thousands upon thousands of cell phones in the audience. Hart’s placement in the frame gives the appearance of him basking in their glow as he graciously thanks the fans who love him. His humble appreciation feels so genuine that it’s easy to see why his fans love him so much.

As for the jokes: Hart is more consistently on-target than in any of his prior concerts. Assisted by several giant screens onstage, Hart works the audience over visually and verbally. At one point, the screen behind him gives the appearance that he’s sitting on the edge of a huge toilet bowl. “This is actually what I look like in the bathroom,” he says, mocking the 5’4” frame that’s a major element of his comedy. At another point, the screen becomes a vast ocean populated by one scary shark fin piercing the water’s surface. Hart uses the shark in a fun hypothetical argument involving his fiancée asking him questions for which no answer is credible.

Hart gets a surprising amount of mileage out of jokes about shoulders and kneecaps, and finds a use for the word “really” that viewers will be quick to employ upon leaving the theater. He also milks for laughs the not-exactly stereotypical notion that us Black folks “run first and ask questions later” when faced with threats both regular and supernatural. A section on the horror film “The Conjuring” is perhaps the funniest thing Hart has ever done onstage. Armed with a huge gold microphone that’s a sight gag unto itself, he delivers a hilarious set that’s well-structured and crisply paced.

“Kevin Hart: What Now?” is Kevin Hart at the top of his game. I just wish I had skipped the opening act the way I normally skip the previews. This would have been a half-star better if I had. Your comedic mileage may vary. 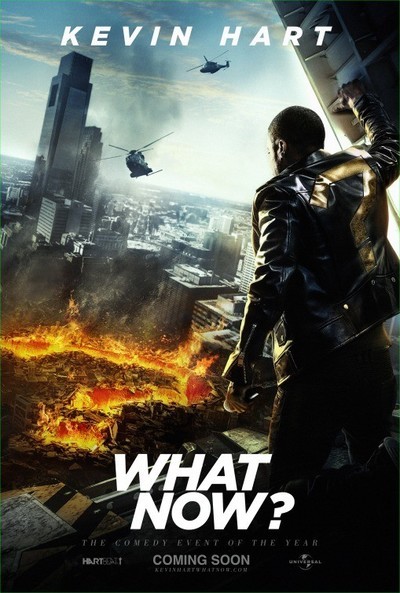 Rated R for some sexual material, and language throughout.