This Valentine's Day, Hollywood's remake factory used the Hot Tub Time Machine to retrieve three titles from the '80s. Competing for your patronage, with or without a date, are "Endless Love", "RoboCop" and the best of the batch, "About Last Night." The former two surrender their original R-ratings for the absurdity of the PG-13. "About Last Night" surrenders its predecessor's ellipsis in its title, but thankfully retains the salty mouth and sexual shenanigans that mark it as an adaptation of David Mamet's "Sexual Perversity In Chicago".

Screenwriter Leslye Headland ("Bachelorette") leans more on Tim Kazurinsky and Denise DeClue's 1986 screenplay adaptation than Mamet's play, which may dissatisfy fans of the play. Fans of paint-peeling levels of cussing will find much to enjoy here, however. Headland shifts the sexual perversity to Los Angeles' Broadway Club, where Bernie (Kevin Hart) and Danny (Michael Ealy) are discussing, in graphic, hilarious detail, Bernie's latest hook-up. Intercut with their conversation is the female take on the same event, delivered by Joan (Regina Hall) and her roommate Debby (Joy Bryant).

Through clever editing, Bernie and Joan finish each other's sentences, and shockingly, the details synch up. Both complain about Bernie's "whisky d--k," and both sing the praises of Joan's ability to remedy it. This opening sequence presents all the characters on equal ground; what the women say is just as important—and as dirty—as the men.

Since Danny's been sulking over a breakup with Angela (Paula Patton, wasted yet AGAIN), Bernie asks Joan to bring Debby as a double date opportunity. Danny and Debby exchange polite pleasantries while Bernie and Joan get plastered on hard liquor and retreat to the bathroom for the first of "About Last Night"'s many bouts of sexual slapstick. "This is the worst date I've ever been on," says Danny, "and it's not even my date!"

Danny's evening takes a turn for the better. After taking his hand in an attempt to make an ex-boyfriend jealous, Debby gets called on the carpet by Danny. "I'll be your fake boyfriend," he tells her, "but I would have done it differently." So begins a sexy exchange that leads the couple into bed.

As Bernie congratulates Danny on his evening ("How did you know?" asks Danny. "She's Joan's roommate!" Bernie replies.), Joan gets the 411 from Debby. "I can't believe I slept with him on the first date," Debby says, but it's not at all a lament. One of the more refreshing things about this film is how it acknowledges, without shame, that women love to have (and gossip about) sex just as much as men do.

Joan is far from judgmental until Danny and Debby become an item. Then she and Bernie step in as devil's advocates with ulterior motives. The more the couple spends with each other, the less time they have for their friends. "About Last Night" becomes a tale of two romantic couples, one trying to navigate the normal slings and arrows of a relationship, the other doing their damndest to be antagonistic in order to hide their true feelings. This plays out over a year, with title cards denoting the changes of season.

At times, the quartet are each other's worst enemies, at others, they're each other's pillars of support. Bernie and Joan both want things to go awry for their friends, but when they do, they're genuinely comforting toward their respective buddies. This psychological dependency is only hinted at; the film fears this darker path. It prefers to stare at it from afar rather than explore it, resulting in a missed opportunity to be heftier and more original than most romantic comedies.

The film's best asset, and the thing that elevates it above the 1986 version, is how well it is cast. Jim Belushi and Elizabeth Perkins were perfect as Bernie and Joan, but Rob Lowe and Demi Moore were dull as Danny and Debby. Here, Ealy and Bryant use chemistry and good acting to keep us interested when the flashier Hart and Hall are offscreen. They have bigger narrative hurdles to clear, and somehow manage to emerge unscathed when "About Last Night" stoops to the usual tired romantic comedy third act clichés.

Bernie put Jim Belushi on the map, and one can see Hart's star rising even higher with his portrayal. After "Grudge Match" and "Ride Along", I feared Hart was turning into a low-rent Chris Tucker. But he's fantastic here, coming into his own as a leading man. Hart's stand-up relies on a lot of self-deprecation, but some of his funniest moments onstage are when he's just being mean and confessing his sins. Bernie affords him plenty of hilarious opportunities to vent his anger, and Hall is a great foil who gives as good as she gets. Hart's explanation of the exact dynamics of his relationship with Hall is a small piece of confessional magic.

Despite all the raunchy sex in "About Last Night" (one scene would send Colonel Sanders and Frank Perdue running for the exits), this is still a very talky movie. Much of the dialogue is very funny and revealing, but director Steve Pink is more concerned with exploring the relationships than accelerating the narrative pace. There's time to meditate on one's own relationships as they relate to the protagonists' trials and tribulations. This is a fine date movie, but depending on the status of your relationship, it may also be a dangerous date movie. Post-movie discussions are imminent amongst couples. 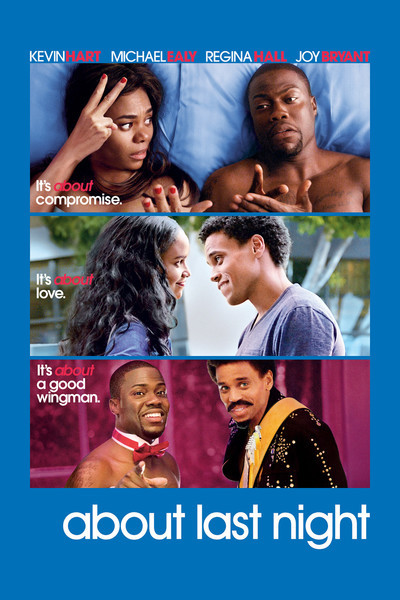 Based upon "Sexual Perversity in Chicago" by