It’s sometimes easy to forget that Denzel Washington’s resume is as full of action thrillers as it is stocked with weighty dramas that cry out for awards. But “The Equalizer” is a high-impact reminder. Yes, it is part “Man on Fire,” part “Taxi Driver” and outright based on the ‘80s TV series of the same name that starred Edward Woodward as a former covert operative turned guardian angel for helpless victims.

If "The Equalizer" lacks gravitas, it is fairly sturdy as far as pure entertainment goes—and the actor takes his stealth vigilante as seriously as he does his Oscar-nominated performances in "Flight" or "Malcolm X," pulling out that patented charm as well as considerable deadly force. Unlike many of those AARP card-carriers in "The Expendables," Denzel, at the ripe age of 59, is still dependable as a man who gets the job done when the meanies run amok, and who still draws a crowd at theaters when he does so.

"The Equalizer" is especially noteworthy since it pairs Washington again with Antoine Fuqua, the director behind his Oscar-winning role in 2001’s “Training Day.” But don’t expect any “King Kong ain't got shit on me” histrionics in this caper. Washington’s Robert McCall exudes a serene calm while living a low-profile Spartan-like solo existence as a clerk at a Boston area Home Depot-like emporium.

While his co-workers treat him with respect and count on him for advice, they also wonder about his past. He jokes with a couple young guys that he used to be a Pip—meaning one of Gladys Knight’s backup singer/dancers—and they almost buy it as Washington pulls off some smooth old-school moves.

His McCall was a pip all right. The kind of pip who can pre-visualize a potentially explosive situation with brilliant Sherlock-level precision, and dispatch would-be assailants with swift and often grisly violence. He also employs a watch timer to judge how long it will take to wipe out a threat. Usually, it is within seconds.

We sense he hasn’t had to use these special skills for a while. Instead, this apparent insomniac spends his nights sipping tea while reading classics (including “The Old Man and the Sea,” “Don Quixote” and “The Invisible Man,” titles that all comment on his current status) in an all-night diner that Edward Hopper would appreciate. But he soon will be called upon to pull his fighting skills out of hibernation after meeting a sweet-but-wounded teen call girl who hangs out at the restaurant between clients.

What could be an uncomfortable relationship between retired killer and an underage prostitute who goes by the name Teri is sensitively handled. And it helps that Chloe Grace Moretz keeps her moppet’s precocious sexuality in check, and instead makes a sincere connection with this lonely widower, even revealing her dreams to be a singer. But when she doesn’t show up for her usual late-night dessert after a brutal beating by her Russian pimp has landed her in the hospital, McCall is ready to return to duty.

From there, it is a game of cat and mouse as Washington hunts down the perpetrator and his thugs at a Russian restaurant. Part of the fun, if you want to call it that, is how the baddies always underestimate him. And pay quite the price in doing so. Let’s just say you might regard corkscrews in a whole new way after this ugly confrontation.

Of course, there is a Mr. Big above the pimp, a gangster ironically named Teddy whose torso is like a Sistine Chapel for Satanic images. Marton Csokas sneers with sardonic relish and gives us someone truly hissable to root against, especially as it becomes apparent how deeply these Eastern European no-goodniks are engrained in corrupt activity in the U.S. Meanwhile, Teddy’s boss is eager to locate the mystery avenger who is knocking off his workers and undermining his lucrative businesses.

Fuqua likes to turn the act of violence into a sort of crude ballet, complete with repeated images of flowing water, as if washing evil away. All that is fine, although it keeps “The Equalizer” from being as lean and mean as it could be. While some might decry the ludicrous showdown that unfolds in the darkened aisles of McCall’s mega-store workplace, I got a kick out of watching Washington turn everyday hardware supplies into lethal weaponry. Then again, I have been a fan of mayhem occurring in a place of commerce ever since "Dawn of the Dead"’s climactic zombies-vs.-humans battle that takes place inside of a mall.

Basically, “The Equalizer” is an average-Joe blue-collar version of a comic-book avenger, secretly stalking those responsible for abusing and preying upon innocent citizens. And this film acts as an origin story with an ending that suggests a new franchise is afoot. It might not be bad for Washington to stay in the action game in a series that at least acknowledges those who qualify for a senior discount can be crusaders, too. 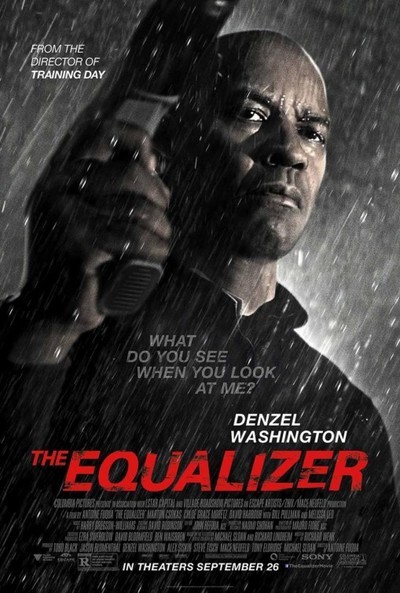 Rated R for strong bloody violence and language throughout, including some sexual references