I laughed out loud when comedian Kevin Hart said "thank you and good night" at the end of "Kevin Hart: Let Me Explain," because I thought he was kidding. Hart was just hitting his stride (literally — he was telling a joke about riding a horse) when his show abruptly ended. Since I wasn't the only one who chuckled, a wave of genuine shock rolled through the theater where I saw it when the credits started rolling. A smattering of applause was drowned out by murmurs of surprise. Like me, people were calculating their "running time to movie theater ticket price ratio" and coming up with an unsatisfying quotient.

"A hour and 10 minutes," replied the disappointed voice next to her.

"We should have waited for the damn bootleg!"

I wanted to kiss this woman, because she read my mind. I paid $15 for a 71-minute stand-up comedy movie whose first 20 minutes feature no stand-up comedy whatsoever. With credits, that's 47 minutes of jokes, several of which are only mildly funny, if funny at all. To say I felt ripped off is an understatement. Granted, most comedy routines run 30-60 minutes on Comedy Central or HBO, but considering that I was sitting in a theater rather than in my drawers on my couch, I expected more. "Richard Pryor: Live in Concert," the greatest stand-up movie ever made, runs 78 minutes, 72 of which is Pryor's master class of hilarity. "Eddie Murphy: Raw," whose opening skit format "Kevin Hart: Let Me Explain" mimics, spends about 7 minutes on its skit before providing 80 or so minutes of Murphy having a nervous breakdown onstage. Chris Rock's classic "Bring the Pain" runs an hour, but he didn't make you leave your house to see it.

I provide these numbers as a gauge for my expectations, but I acknowledge your mileage may vary.

Perhaps I would have been more forgiving if "Kevin Hart: Let Me Explain" didn't make me wait so long for Hart to take the stage. The film opens with an unfunny party scene shot with a camera shaky enough to make me sick. This is followed by an interminable trip into the comedian's navel. Hart addresses the camera to comment on being called a "LAB," or a "local-ass bitch." (My old Black ass needs an Ebonics review; I've never heard that one before.) To prove that he has international appeal, Hart shows clip after clip of his performances from around the world. I noted that not ONE of these clips features Hart telling a single joke. Instead, it's him saying "thank you [fill in the location]!!" ad nauseum. It goes on so long that I actually fell asleep. When I awakened, Hart's little cartoon plane was still flying to locations to prove he was a big star. Didn't we know this before we bought our tickets? Why did we need a commercial for Kevin Hart opening a movie we paid to see?

The montage continues with numerous people professing their love for Hart, telling us how they found him on the Internet. Even people who can't speak a word of English gush adulation, which reminded me of Murphy's "Raw" comments about foreigners who can only understand the curses in his routines. I was hoping one such person would ambush Hart in the clips, speaking an unintelligible language peppered with English profanities. No such luck befell me, just more clips of fans and Hart's entourage sleeping on a bus.

When Hart finally does take the stage at sold out Madison Square Garden, a stage equipped with geysers of fire he occasionally employs for comic punctuation, I crossed my fingers and hoped for big laughs. And laugh I did on occasion, because Kevin Hart is indeed a talented comedian. This is just not his best material. There's an unfortunate "been there, done that" feeling to "Kevin Hart: Let Me Explain," with the comedian riffing on the usual Def Comedy Jam/BET ComicView targets: psychotic Black women, clueless friends who mess up your ability to successfully cheat on those psychotic Black women, White women, fights, etc. These can be hilariously funny topics but they just feel tired here.

Hart uses the N-word way too much for my taste, but that's the price you pay for Black comedy. Pryor did it, and was hilarious and shocking. Hart uses it as both a term of endearment and a dis. Prowling the stage, Hart uses his stature for maximum comic effect (he's 5'2"). His physicality is his biggest asset. As he throws himself around the stage with reckless abandon, one can understand why he's become such an Internet sensation. He talks fast, and has an underlying honesty that can be very effective. I like Hart, but I wasn't feeling him this time.

The audience at "Kevin Hart: Let Me Explain" was what polite company calls "an urban crowd." I'm not polite, so I'm going to call them "a buncha loud-ass people from my 'hood." They talked back to the screen, which I'm used to, and their commentary was funnier than "Kevin Hart: Let Me Explain." I admit to talking back to the screen once, which stunned me because I never do that. I was so frustrated by the pre-concert nonsense that I heard a familiar voice yell out "Can we get some f#*king jokes up in here?" My request was eventually granted, served with a heaping side of buyer's remorse. Wait for this to show up where it belongs — on cable. 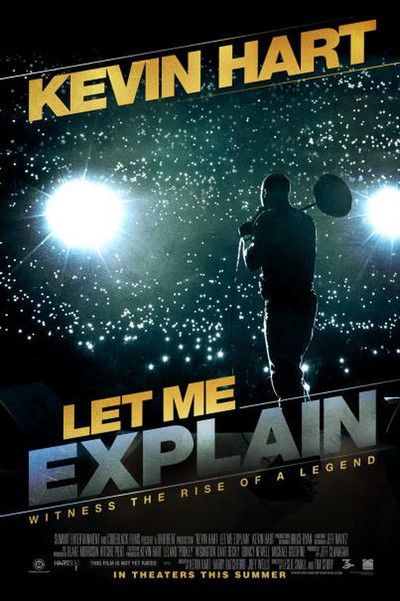