"Gloria Bell," the latest from Chilean director Sebastián Lelio, is a remake of his 2013 award-winning "Gloria," only the action's been transplanted from Santiago to Los Angeles. With the original "Gloria" still fresh in the brain, it's interesting to watch what has been altered (or not) from the original; it's like seeing two productions of Hedda Gabler where different actresses bring their own spin to familiar material. Paulina García played Gloria in the original, and her performance made a powerful impression: her big glasses, her full laugh, the way she danced at the nightclub—expressing joy and loneliness simultaneously. In "Gloria Bell," the role is played by Julianne Moore, and it's a beautiful fit for her. In some moments, "Gloria Bell" is almost an exact recreation of the original, in shot construction and edit choices, even in dialogue (the script was co-written by Alice Johnson Boher and Lelio), but there's enough freshness in the approach that makes "Gloria" a unique experience, funny and a little bit messy. The mess feels real.

Gloria (Julianne Moore) has been divorced for about 12 years. She works for an insurance agency, and has two adult children busy living their own lives. At night, she goes to a nightclub catering to the over-50 set. She loves to dance. She's open to meeting men; that's why she's there. But her attitude is not a yearning Miss Lonelyhearts. It's not that she's okay with being alone, or that she doesn't need or want a man. There's something in her that is a survivor. Her outlook is optimistic and humorous. She drives back and forth to work, singing along to her favorite songs blasting out of the radio. She leaves long messages on her kids' voicemails, ending with, "It's Mom." Her son (Michael Cera) is a new father, but his wife or girlfriend is never around. Her daughter (Caren Pistorius) is a yoga instructor who has fallen in love with a big wave surfer from Sweden.

One night at the nightclub, Gloria meets Arnold (John Turturro), divorced a year ago, also with two adult children. Gloria and Arnold don't so much "hit it off" as they decide to try each other on. They have sex, they talk, he reads her a poem, they play paintball. Meanwhile, life goes on, and the "life goes on" aspect of "Gloria Bell" is one of its distinguishing characteristics. Scenes don't linger too long. Lelio moves us onto the next thing. There's a situation with Gloria's volatile neighbor, there's a coworker friend who's afraid of being let go (played by the great Barbara Sukowa, an international sensation in Rainer Werner Fassbinder's "Berlin Alexanderplatz" and "Lola"), as well as intermittent lunches with her mother (Holland Taylor). A couple of exchanges have been added—about the failing economy, guns and climate change—perhaps to make the film more relevant or Americanized. These exchanges really stand out.

Julianne Moore can be a maestro of passivity (as in "Safe," "The Hours," or "Boogie Nights," where Amber's little-girl voice hid pain too intense to even acknowledge). But Moore can also be explosive and unpredictable, as in "Magnolia," "Maps to the Stars," or "What Maisie Knew." She's at home in high style, like "Far From Heaven" but also in gentle realism, like her Oscar-winning performance in "Still Alice." What's fun about her performance in "Gloria" is that it's very much about being "in the moment," whatever that moment may be. Moore is spontaneous, impulsive, complex. It's never just one thing that's going on with her. It's always two or three things, maybe even four. Her eyes behind her glasses are always sharp with listening, and her laugh is at the ready. Still, though, there are moments when a crack opens, revealing her loneliness, her ache to share her life with someone. (One such moment happens in the final scene, as Laura Branigan screams "Gloria" from the speakers, and although the expression on Gloria's face is gone in a flash, it's a gut-punch.) There's a scene where Arnold reads her a long poem by Claudio Bertoni, and at first she laughs as he reads, because the words are funny. But slowly, the moment shifts, and she's in tears by the end. It's a gorgeous piece of acting.

Arnold is in Turturro's sweet spot as an actor and the romantic aspect allows him to bring out all these other shadings he doesn't often get to play. In the original, Arnold was a good 15, 20 years older than Gloria. Here, he is a peer, adding something slightly more explosive to the pairing. Turturro, never afraid to look bad or weak or unsure, gives us a character so defined by his family "needing" him, it's literally running his life. He looks hunted, trapped. Turturro makes space for complexity and ambiguity.

In "Gloria," "A Fantastic Woman," "Disobedience," and now "Gloria Bell," Lelio shows a refreshing curiosity —an imaginative kind of empathy—about women's experiences. He cares about what it might be like to be in certain situations, what the world might look like if you were a 50-something divorcee going to a nightclub in Santiago, or a trans woman trying to get your dead boyfriend's family to acknowledge you, or falling in love with your childhood friend in a world where that is just not done. Sometimes his touch has been a bit heavy, but here—in the original and in "Gloria Bell"—his touch is feather-light. Loose ends aren't tied up. Some situations are not resolved, and not all dots are connected. The best of "Gloria Bell" is how it's not propelled by a plot, or by any one urgent concern. "Gloria Bell" is propelled by her. 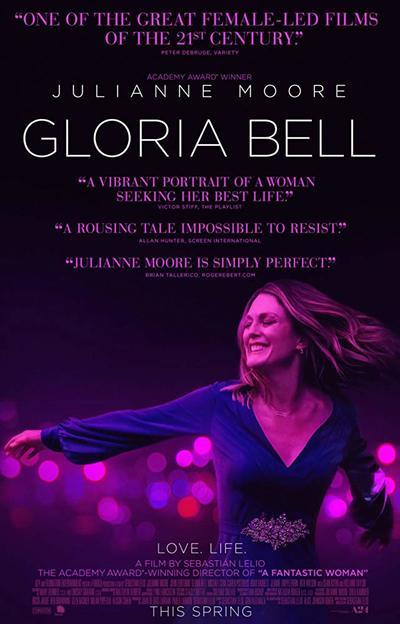 Rated R for sexuality, nudity, language and some drug use.