On the second page of What Maisie Knew, Henry James' 1897 novel about the divorce of two wretchedly selfish people and the effect it has on their young daughter Maisie, an acquaintance expresses sympathy for the girl. "The words were an epitaph for the tomb of Maisie's childhood," James writes, and the novel's events go downhill from there. James didn't pull his punches, and (except for occasionally) neither does the modern-day film of this tale, co-directed by Scott McGehee and David Siegel.

"What Maisie Knew," set in contemporary Manhattan, follows the events in question through the eyes of a 6-year-old girl (Onata Aprile) as she tries to interpret the often-incomprehensible behavior of adults who use her as a pawn in the war they are waging against each other. The story is harrowing in its depiction of an almost-casual loss of innocence. Henry James' book was told entirely from Maisie's point of view, and the film is courageous enough to attempt the same thing. When connecting links are lost, when a collage of images takes the place of exposition, it is because a 6-year-old girl is our guide. The result is a painful and often infuriating film, with a sense of unnamed terror flickering on the periphery: What effect will these events have on Maisie as she grows up? Does anyone care?

Maisie lives with her parents in a beautiful Tribeca apartment. Her mother Susanna (Julianne Moore) is a rock star, working on a new album, and her father Beale (Steve Coogan) is a businessman, always on his cell phone. Their vicious arguments are constant background noise in Maisie's life, and she is shown coloring in her room or playing with her toy horses as the sounds of parental hatred ricochet up through the floorboards. It might as well be traffic outside for all Maisie reacts to it. Divorce is clearly inevitable with these two, but it is once they separate that the combat really begins.

Maisie's sweet nanny Margo (Joanna Vanderham) is suddenly ensconced at her father's new apartment, ostensibly to keep taking care of Maisie, but really because she has entered into a romantic relationship with Beale. There's a sickening sense in these scenes of adults trying to "get away with something" in front of a child. Maisie's father, brilliantly played by Coogan as a nasty piece of work, couldn't care less. Maisie is irrelevant to him, except as a means of getting back at his ex-wife.

Susanna's response to her ex-husband's new marriage is to quickly get remarried herself, to a much-younger bartender (Alexander Skarsgård) named Lincoln. Lincoln is the only one in this hive of self-absorbed madness who seems to consider Maisie’s reactions. Susanna is jealous of the natural, affectionate bond between her new husband and her daughter, perhaps because her own gestures of love come off as so empty. When Margo asks Maisie at one point, "You like Lincoln, don't you?" and Maisie replies simply, "I love him," her honesty is spontaneous and unselfconscious. Maisie knows love when she sees it.

The screenplay, by Nancy Doyne and Carroll Cartwright, avoids a sentimental tone, which helps enormously with such tricky material. Maisie does not seem like a typical "movie child," and this is a credit to the young actress playing the role, as well as to the restraint of co-directors McGehee and Siegel. Maisie is not precocious, she doesn't throw tantrums and in only one scene do we see her shed a tear. She is a thoughtful child, riding her tricycle on the terrace, staring through the window at the mysterious world of the adults in charge of her.

But then we see her in fragmentary scenes in her schoolroom, laughing and raising her hand, or staring up at a kite entangled in the wires, and we get the full scope of her experience. Children are small only in size. Intercutting the action of the film with repetitively dreamy shots of Maisie's dolls and teddy bears and mobiles underlines the silent tragedy of what is occurring.

The adults, in the main, are so callous about shielding Maisie from their own ugliness, that when someone shows up and behaves in an age-appropriate way with her (like Lincoln) it is shocking. You had forgotten that people like that existed.

Steve Coogan, in his few scenes, is terrifying. It's a great portrayal of unfettered narcissism. He has one moment, in the back of a cab, saying goodbye to Maisie, that is as good as anything he has ever done. For just a moment, you see him understand, and actually feel, his own terrible nature. Julianne Moore is not quite convincing as a rock star, truth be told, but she is also terrifying, showing up at a deposition wearing a skintight red dress and trying to convince Maisie that her father threw her across the room one time. "You don't remember that? He just threw you across the room. Make sure you tell them that."

Alexander Skarsgård, who was so baffled and domesticated in Lars von Trier's "Melancholia," emerges here as a handsome and sexy leading man, the film's shining hope, its natural center. You feel safe when he is around, even though Lincoln doesn't know what he is doing half the time, and doesn't know you're supposed to hold a little girl's hand when you cross the street with her. Lincoln is almost as innocent as Maisie is.

Some of the twists the film takes, particularly in its final third, strain the powers of belief, but the ending, thankfully, does not soft-pedal all that came before. Henry James' ending, for sure, is bleaker, but it is a credit to the directors and the screenplay that the film does not betray its own story in the final moments. "What Maisie Knew" is an indictment of those who do not realize that innocence is not something to be scorned and used, but cherished and protected. 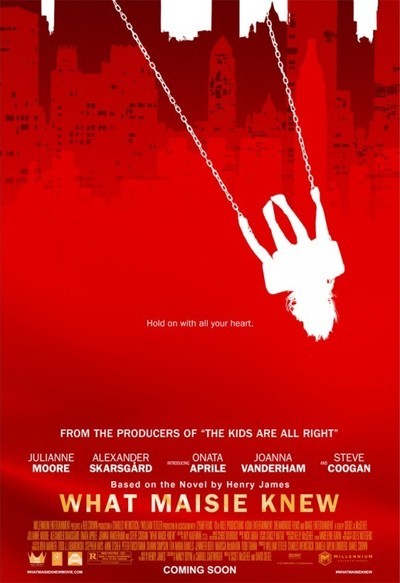