Lauded at numerous international film festivals since it debuted last year at Berlin (where it won Best First Feature), the offbeat comedy might also be called the most creative recent engagement with the cinematic past, especially the French New Wave, but that’s a subject that deserves both explication and rumination, so let’s start with the basics.

The year is 1999. Tomás (Sebastián Aguirre) is a teenage troublemaker who lives in Veracruz with his mother, whom he’s driving crazy. One day, when he drops a water bomb off a roof and it hits a harried woman and her baby, mom decides she can’t take it any more and sends the boy to stay with his older brother, Federico, a.k.a. Sombra (Tenoch Huerta), a college student in Mexico City.

“Güeros” is a film of running jokes, and one concerns the siblings’ skin colors. The word “güeros,” a derogatory slang term meaning something like “paleface” or “whitey,” applies to fair-skinned Tomás. Sombra (the nickname means “shade”) is dark, meanwhile. That practically everyone they meet seems to remark on this difference is never explained, but that somehow makes it ever droller.

When Tomás arrives in Mexico City, he finds his bro holed up in his incredibly filthy high-rise dorm room with his roommate and partner in slackerdom Santos (Leonardo Ortizgris). At night, they live by candlelight, if that, because there’s no electricity. Daytime, they sometimes cadge power via a cord supplied by their downstairs neighbors’ mentally challenged daughter.

Santos and Sombra are nominally students, but they’re not in class because their school is on strike. So why aren’t they out demonstrating? “We’re on strike from the strike,” they explain. In other words, they’re completely inert and disengaged, living on fumes and not interested in doing otherwise.

Ironically, it’s the arrival of young screw-up Tomás that injects some motion into their lives. The boy idolizes a legendary Mexican rock’n’roll pioneer named Epigmeneo Cruz (Alfonso Charpener), whose music he listens to on a battered cassette handed down from his and Sombra’s absent father. When Tomás learns that Cruz is reportedly near death at a hospital in the city, he persuades Sombra and Santos that they must find him and pay their final respects.

That, plus the fact that their downstairs neighbor wants to beat their asses for stealing his power, propels the guys out onto the highway in their shitty clunker, on an odyssey that takes them through many cul de sacs and wrong turns but also includes a stop at their embattled university.

Here, the film’s desultory pacing and whimsical mood give way to something much more electrifying: a university in the tumult of revolution. The situation is both dramatically and thematically important, so it’s worth quoting Ruizpalacios’ words on it.

“In April 1999,” he wrote, “the Universidad Nacional Autónoma de México (UNAM) students began to strike to show their disagreement with the administration’s decision to instate an enrollment fee even though the University had always been free….What started as a symbol of dissidence (it turned out to be the biggest movement since the 1968 student strikes) finished as an existential crisis for many involved. Before long, social disparities began to surface within the student movement, causing distance between people who were involved. A lot people found themselves not only without a university, but without a purpose in life, no beliefs, nowhere to belong.

“’Güeros,’” he continued, “is actually two movies in one. On one hand, it is a portrait of this particular stage in Mexico’s history. On the other…it is an exploration of Mexican youth who are not able to feel at ease in their own country.”

This double purpose is a fascinating concept on the thematic level, and it has a corollary on the formal level that gives the film’s specifically Mexican social and historical concerns a universal cinematic reach. For, just as the story implicitly looks from the student activism of the moment (particularly related to the disappearance of 43 students in Guerrero state last year) back toward the ‘60s brand via 1999 (when issues of identity politics began to intrude), so do the film’s filmic references harken back toward such films as Godard’s “Breathless” and other ‘60s classics, but through the prism of more recent works such as “Stranger Than Paradise,” “Slacker” and others.

That scheme of references may sound a bit dense on paper, but it helps explain why the film’s New Wave evocations come across not as static or precious idolatry (as purely aesthetic tributes tend to make them) but as part of an active, challenging dialectic that involves both politics and movies. In a sense, “Güeros” asks the viewer what the ‘60s were worth, in terms of its innovative popular art and its political radicalism—which of course were completely intertwined. Yet it doesn’t assume there are any clear-cut or easy answers. If the film comes at us with a heady appreciation for both the movies and revolutionary impulses of 1968, it does so with a witty circumspection that admits that their value has been continually amended and complicated by more recent developments.

And while Ruizapalacios has admitted other influences ranging from Ozu to Fellini to Monte Hellman, the New Wave does seem to be his pole star. You get that in the film’s focus on marginal, quasi-hipster characters; its self-reflexivity and cascade of cinematic and pop-culture nods; its winningly naturalistic performances, jerky, stop-start plotting and geographic peregrinations (the director has called it a road movie about Mexico City); and, most especially, in Damián Garcia’s exultant camerawork, which has a fluid, observant lyricism worthy of ace New Wave lensman Raoul Coutard.

In one sense, the film is a great lark, a dizzy road trip with some entertaining knuckleheads, both light-skinned and dark. Yet it also manages to be a movie with some serious things on its mind, for those who want to think about what it’s saying. More than perhaps any other country, Mexico has lobbed some real cinematic intelligence onto the world stage in recent years. “Güeros” continues that salutary tradition. A sly, insouciant masterpiece, it marks Alonso Ruizpalacios as a talent to watch. 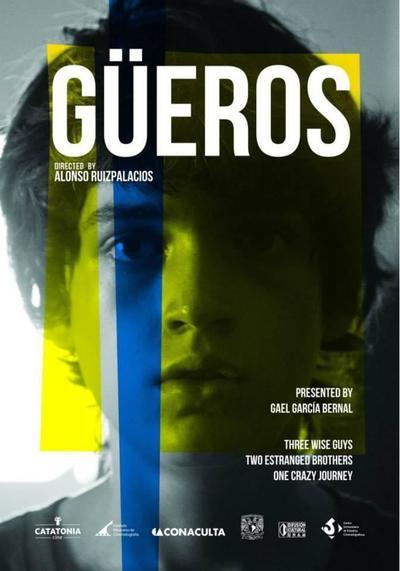