There's always something delightfully geeky about a genre film by Christopher Landon. The co-scribe of the vastly entertaining “Disturbia”—which skillfully blended Alfred Hitchcock’s “Rear Window” with a troubled teen story set in the ‘burbs—Landon knows a thing or two about fusing recognizable horror-thriller tropes with Easter eggs from the classics and a welcome side of black comedy. While the writer/director’s “Happy Death Day” sequel “Happy Death Day 2U” was guilty of leaning too far on the side of ‘80s comedy and abandoning the story’s horror roots, its accomplished “Groundhog Day”-meets-masked-killer predecessor (which Landon directed from a script by Scott Lobdell) memorably proved Landon’s passionate dedication to the genre in immensely rewarding ways.

That enthusiasm stabs its way through “Freaky” so resolutely that Landon’s latest outing feels a tad heavy-handed in mixing together a body-swap farce and a high-school slasher with one too many references to the comedies and horror staples of yore. It’s almost as if the filmmaker thought, “They don’t make ‘em like they used to” just like the rest of us, and took it upon himself to restore a little bit of everything, from the original “Friday the 13th” to “Freaky Friday” and beyond, in one movie packed with familiar breadcrumbs, complete with a vintage title card. This kind of widespread homage is both a bug of “Freaky”—the movie is never as unpredictable as you really want it to be—and the main feature that endearingly caters to the nerds of such fare, which admittedly includes this critic. In other words, "Freaky" is a fun, frisky, and nostalgic ride that delivers laughs, various inventively bloody kills, and on occasion, even some 21st-century-appropriate observations on gender norms and sexuality. Just don’t expect to be surprised a great deal by it.

One big exception to the film’s on-paper obviousness is its pair of risk-taking performances by leads Vince Vaughn and the consistently great young actor Kathryn Newton (“Blockers,” “Big Little Lies”). The former plays the notorious (and of course, masked) serial killer known in his sleepy town as the Blissfield Butcher, who sets the film in motion by murdering a group of unsuspecting teens in a gruesome opening with loud echoes of “Scream.” The latter is her high school’s perennially bullied outcast Millie—a smart, lovely, introverted girl in frumpy clothes. Living with her sweetly fretting single mother and her policewoman sister in a near-Spielberg-ian fatherless home, Millie spends her days with her two close friends (Celeste O’Connor and Misha Osherovich gracefully making the most of their clichéd parts as a smart bestie and gay teenager) and obsesses over her crush (Uriah Shelton’s Booker), while trying to steer clear of her vicious tormentors.

Bad news for anyone thirsty to see a murderous Vince Vaughn revel in his dark side for a bit—the quietly sinister edge the mostly comedic actor always possessed, but movies never quite exploited, save maybe for “Brawl in Cell Block 99” and more notably, as Norman Bates in Gus Van Sant’s “Psycho” remake. Here, Vaughn is mostly behind a mask and underwritten as the Blissfield Butcher, until the body swap happens between him and Millie when the Butcher wounds the young woman with a mythical knife early on in the film. To Landon’s credit, he handles the quirks and pleasures of the body-swap formula extremely well, and his actors are game through and through. Vaughn especially excels with physical comedy, believably portraying a teenage girl in peril stuck in a criminal’s body, racing against a 24-hour clock before the curse becomes irreversible. Now clad in a seductive leather jacket, sporting a fashionable high ponytail and crimson lipstick, Newton on the other hand wickedly swings for the fences as the new Millie, fully taking advantage of her girly looks, newfound killer moves and instincts, making a convincing case that she could one day become the next sought-after Hollywood action star.

With pacing that zips along, attractive production values, and an unexpectedly moving emotional core about familial love, “Freaky” hits all the probable notes as Millie teams up with her school mates (in Vaughn’s body, to be clear), gifting the viewer a few memorable gags and inspired one-liners along the way. For a movie that doesn’t reinvent the wheel in neither horror nor comedy, the most noteworthy accomplishment of “Freaky” is how gleeful it makes one feel that something so proudly old-fashioned can exist today without feeling dated. 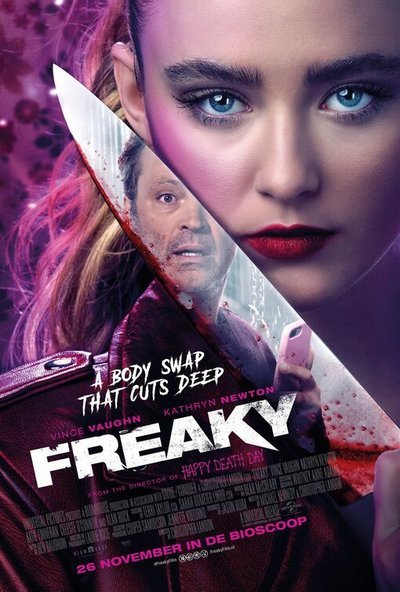