“Blockers” is about six movies in one, and only about four of them work. It’s the kind of comedy one could stumble upon late at night on HBO and thoroughly enjoy, but it strains under the weight of its tonal inconsistencies in a movie theater. It veers wildly from the style of a coming-of-age comedy like “Superbad” to something more family-oriented and heartfelt to the gross-out/raunch flicks we saw in the wake of the success of “There’s Something About Mary.” There’s something almost admirable about a comedy that gives you whiplash as it jumps from heartfelt conversations about the emotional trauma a parent faces when their child grows up to a scene in which John Cena chugs beer with his asshole, but it gets exhausting watching “Blockers” jump so many hurdles.

Parents Lisa (Leslie Mann), Mitchell (John Cena) and Hunter (Ike Barinholtz) watch their little girls meet outside of elementary school on their first day, an emotional experience for any parent. As the trio realizes that their kids have become fast-friends, Hunter jokes that this means now these strangers must be friends too—as we all know you’ll spend more time with the parents of your kid’s friends than your actual ones. Hunter then asks if they want to go get a beer, and Mitchell starts to cry (“Blockers” gets a lot of mileage out of the visual of a guy Cena's size getting emotional).

Cut to a bookend milestone of educational life, Prom Night. We learn that Lisa, a single mother, has formed a loving relationship with her daughter Julie (a charismatic Kathryn Newton), but that she may be a little clingy as the young lady is about to leave her on her own. Julie speaks of wanting to go all the way to UCLA (the film takes place in Chicago) and Lisa is clearly rattled at the idea of losing her baby girl at all, much less going that far away. Mann plays the desperation and fear of being along on Lisa’s part just subtly enough for it to work. It’s a part that plays to her strengths as an actress, particularly a very funny speech in which she breaks down at the thought of dying alone. Director Kay Cannon is constantly allowing her three leads to play to their strengths—Mann’s borderline smothering, Cena’s softie-in-a-tough-shell, and Barinholtz’s wise-cracking smart-ass.

But what are they blocking, you say? Well, Julie’s two best friends—the adventurous Kayla (Geradline Viswanathan) and shyer Sam (Gideon Adlon)—are sitting in school just before Prom Night and discussing how Julie is planning to finally have sex that night with her boyfriend Austin (Graham Phillips). Kayla wants in on the shared experience, and decides she’ll do the deed with Connor (Miles Robbins), and Sam, even though she’s way more interested in a lesbian at her school named Marcie (Sarayu Blue), decides she’ll join in as well with her date. As the trio of couples head out on a night of debauchery, Julie accidentally leaves a group chat open on her laptop and the girls’ parents, in a very funny scene, decipher the emojis and discern the plan. Even though Hunter initially balks, they head out to save the girls from doing something they’ll regret.

Despite what you may have thought from the trailers, Cannon is careful not to deliver a comedy that relies on the double standard that has long-defined teenage boys and girls regarding sex. In fact, Julie and Mitchell are constantly being called out on their bullshit. Lisa had Julie at a young age, and doesn’t want the same for her daughter, but it’s also crystal-clear that Julie is in love with Austin and this is no mere hook-up. In "Blockers," sex, and experimentation in general, is treated as a natural part of the evolution into adulthood and it’s the parents trying to hold it back who are the relics. Some of the best parts of “Blockers” make it clear how much being overprotective leaves you stuck in time, and presents the teens as progressive/woke/etc. in a clever, modern way.

Clearly, there are some decent ideas for a comedy in “Blockers,” and some very funny scenes from a cast with rock-solid comic timing, but the movie was either rewritten one too many times or one too few. Whatever the case, it’s an understatement to say that it’s all over the map tonally. The first half-hour or so really worked for me, as it became clear how much Cannon could get from a talented cast (not just the adults, but the kids work too, especially scene-stealer Viswanathan), but then “Blockers” falls into that trap where every subsequent scene has to up the ante in terms of insanity. It loses the emotional grounding that feels genuine in the opening scenes as the drugs, booze, and lunacy gets turned up to 11 in an effort to “top” something like “American Pie” or “Superbad.” “Blockers” has five credited writers (Ed.-It did at SXSW but has since been reduced to two), and you would be able to guess that if I hadn't told you. It’s just incredibly difficult to balance the wildly divergent tones in a movie that features more sex jokes than any I’ve seen in years with characters that feel real talking about going away to school and leaving their parents and friends.

With that in mind, it’s notable how close “Blockers” gets to working. The crowd I saw it with at SXSW—a festival that’s become notable for mainstream comedy debuts, launching “Bridesmaids,” “Trainwreck,” and more in recent years—ate it up and used words like hysterical on their way out. The film is undeniably funny, and I’d like a world in which Cena/Mann/Barinholtz get more work—AND, even more importantly, where more female directors are hired to direct R-rated studio comedies. I just hope the next one is a little better than “Blockers.” 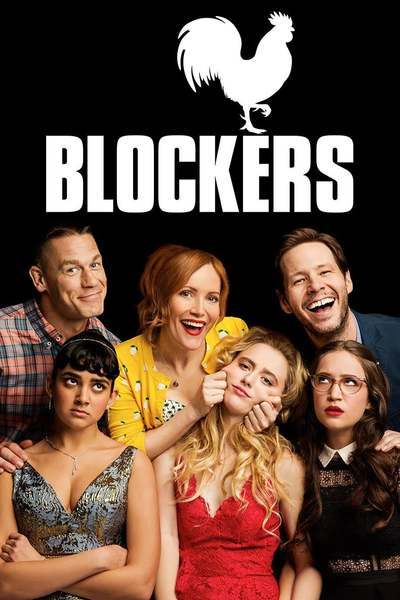 Rated R for crude and sexual content, and language throughout, drug content, teen partying, and some graphic nudity.