How much fun was 2017’s “Happy Death Day,” a gloriously self-aware blend of a teen slasher flick and “Groundhog Day,” with genuine jump-scares and a sharp sense of humor? In director Christopher Landon’s playful genre entry (written by Scott Lobdell) which wasn’t ashamed of its hybrid identity, our feisty heroine Tree Gelbman (“La La Land”'s Jessica Rothe) lived through the day of her murder in the hands of a masked killer again and again until she grew as a human being and a vengeful strategic thinker. And Tree wasn’t just another female survivor—in any other horror flick, this delightfully despicable, unapologetically debauched sorority queen wouldn’t have lasted past the first act. But she’s gotten so far that she received a sequel from the same team. Unfortunately, “Happy Death Day 2U” doesn’t deserve her or her tireless efforts through time to outwit a murderous loser behind a creepy baby mask.

More a geeky '80s-style high school film than horror, “Happy Death Day 2U” puzzlingly gives up on all the strengths that made its predecessor an appealing watch. Throughout this meandering mess, my mind wandered off to anything between “Weird Science” and “Back to the Future Part II—the latter is even frequently name-checked—except, “Happy Death Day 2U” is neither entertaining nor knowingly overindulgent. In reality, its convolutions feel miscalculated in the hands of creators that mistake complicated developments with amusement. And those missteps kick in pretty promptly in the sequel, right from the first occurrence of the very first murder. The early moments of the film admittedly feel like a bummer when we realize we're getting more of the same bloody cycles, but this time focusing on Ryan (Phi Vu); a side character from the first film, playing the roommate of Tree’s boyfriend Carter (Israel Broussard).

Not that Ryan isn’t endearing to follow on his own, but honestly, who’d want a “Happy Death Day” sequel that pushes Rothe, its chief asset, to the side? It’s almost as if the film realizes this gaffe while feeling its way through a cluttered story that corrects and revises itself at once. In due course, Ryan’s involvement in the plot becomes clear: turns out, he and his brainy friends at Bayfield University had invented a machine that created the time loops and sent Tree off to a one-way survival adventure. Surely, history would repeat itself, but in an alternate reality. (Those “Back to the Future Part II” and “space-time continuum” references do come in handy.) Stuck in a different dimension where her mother is still alive, she isn’t in the midst of an affair with a married professor and her fellow meanie Danielle (Rachel Matthews) is dating Carter, Tree tries to resurrect the familial and romantic order in her own universe while repeatedly escaping a mad killer through semi-comical methods.

If you can fend off the recurring bores of “Happy Death Day 2U,” Landon and Lobdell have some chuckles reserved up their sleeves. A sleekly edited montage of Tree’s increasingly creative suicides (why get murdered when you can just kill yourself?) arrives just in time to alleviate the dullness, while an intriguing array of side characters—portraying nerds and villainous teachers—keeps things mildly bearable. The sequel doesn’t drop the ball on some of the previous film’s key roles either—in that, both the adulterous Dr. Gregory Butler and secretly malicious roomie Lori (Ruby Modine) receive character makeovers. Still, the uninventive “Happy Death Day 2U” can neither sustain nor recreate the charms of the first film by recycling its ideas. In a way, Landon’s sequel gets stuck in its own alternate dimension—after starting off as something much closer to “Scream” in spirit, it devolves into a lazy “Scary Movie." 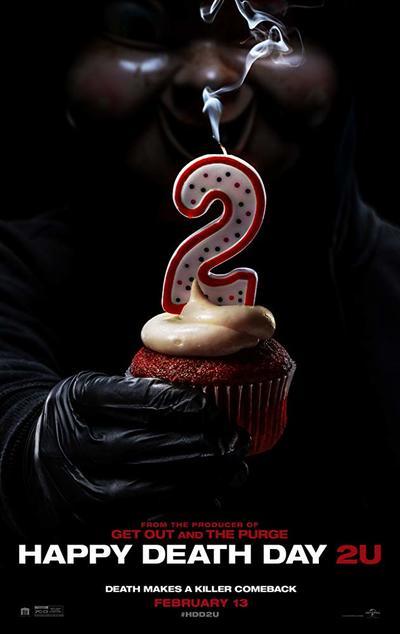