HBO’s excellent “Big Little Lies,” based on the book by Liane Moriarty, plays off how uncertainty and low self-worth can make for a toxic combination. It is filled with mysteries—a new girl in town with a mysterious past, a murder mystery in which we don’t know the victim or killer, a mystery incident in a 1st-grade class—but it is more about how these secrets work to break the already-thin ice on which these characters live than their traditional resolutions. With all seven episodes written by David E. Kelley and directed by Jean-Marc Vallee (“Wild,” “Dallas Buyers Club”), it is also a distinctly consistent vision, working more as a seven-part film than a traditional television series. It can sometimes reflect the soapier aspects of its source material, but there’s so much to like here, particularly in the talented ensemble, that you probably will be enjoying it too much to care.

Madeline Martha Mackenzie (Reese Witherspoon) is one of those arguably hyperactive women who means well but has trouble minding her own business. Perhaps it’s because her home life is stressful. Her husband Ed (Adam Scott) is a nice guy, but their marriage lacks a little passion, and Ed’s convinced he’s Martha’s second-best to her first husband Nathan (James Tupper), now remarried to the younger Bonnie (Zoe Kravitz). It’s bad enough that Bonnie looks amazing, but she’s getting closer now to Madeline & Nathan’s daughter Abigail (Kathryn Newton). Madeline takes on projects to try and keep herself happy, her latest being a controversial production of the play “Avenue Q” and a woman she meets on the way to the first day of school.

Said woman is Jane (Shailene Woodley), the new girl in town who pulls over and helps Madeline after she sees her trip. They form an instant friendship that’s intensified after an incident on that first day of school creates divisions in the community. Jane’s son is accused of something horrible by the daughter of a Monterey power player, Renata Klein (Laura Dern). Madeline comes to Jane’s defense, deepening the rifts in the circle of first-grader mothers.

Also on Madeline/Jane’s side is the gorgeous Celeste (Nicole Kidman), the envy of everybody in town. She seems to have it all—looks, money, beautiful children, and a handsome husband (Alexander Skarsgard) who brings the passion into their relationship. Of course, she hides a secret from everyone she knows. As does Madeline. As does Jane. And so on …

Did I mention somebody’s dead? “Big Little Lies” opens with a series of interrogations from supporting players in this Monterey Melodrama, all being asked questions about the key players and the roles they may have played in the death of someone on Trivia Night. We don’t know who’s dead. We don’t know who’s going to jail. But someone was brutally murdered during a high-profile charity event, and one of the brilliant aspects of Kelley’s approach is that we start to think the killer and victim could be absolutely anyone. The show seems to be suggesting that we are all a misunderstanding or moral error or two away from being killed by our neighbors.

The first episode of “Big Little Lies” is a heady mix of style, beauty, and mystery. Vallee and his regular cinematographer Yves Bélanger shoot Monterey like it’s the French Riviera. They love sunsets and gorgeous architecture and expensive fashion and kitchens that cost more than your entire house. It is a series dripping with opulence; the premiere in particular is intoxicating. And yet they waste no time to highlight the insidious dissatisfaction of this world. Almost every person in this series is what I like to call a “Grass is Greener Person.” Even in these lives that would make most people jealous, they’re itching for something else, trying to find that elusive thing that will truly make them happy—always talking about moving, changing jobs, cheating, finding a new school, etc. And they’re often pinning their happiness on the success of their children—so the drama at school, even though it’s just first-grade, becomes an amplified vision of their own insecurities. Their self-worth hinges so much on how other people see them that even a drama involving their children sends them spiraling.

Of course, gender roles also play a major part in “Big Little Lies,” from the controlling husband to the relatively useless one to the insecure one. These are men often in constant need of attention, as childish as the first-graders (arguably more so given how mature these kids are presented). They can also be violent and horrible. And the show sometimes feels like it’s pushing against a trivialization of domestic violence, but that’s from the source material, and something the cast here does everything they can to avoid, bringing truth to melodrama.

About that cast—it’s hard to know where to begin in terms of singling people out because everyone here is so remarkably good. Belanger’s spectacular cinematography—few people have ever used California sunlight this well—is the element of the show that will be underrated, and Kelley’s gift for dialogue has rarely been this sharp, but it’s the ensemble that makes “Big Little Lies” an event. In smaller roles, Dern, Kravitz, and Scott are fantastic, but it’s the trio at the front of the show that keep it fascinating, particularly Nicole Kidman. She finds something heartbreakingly real about a woman who everyone thinks is perfect to a degree that she feels she has no one with which to share her pain. It’s one of Kidman’s best performances (and I could say the same about Witherspoon and Woodley).

Moral superiority often hides personal insecurity. It’s not a new theme or even a particularly daring one, but “Big Little Lies” offers a modern take that is consistently engaging and artistically rewarding. Narratively, it could have been one or two episodes shorter than its seven-episode length (the plot doubles back and spins its wheels a few times). But this world has been so fully-realized and perfectly calibrated by the cast and crew that you’ll probably wish it was one or two episodes longer. 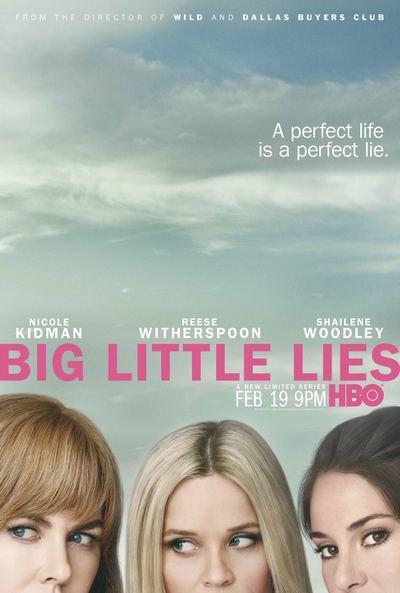