“Happy Death Day,” a horror riff on the “Groundhog Day” model, opens with the Universal logo stopping and restarting, just as the company name is circling the globe. It’s a clever riff on the fact that audiences know what they’re coming to see—a film in which the same events repeat over and over again. It’s also the filmmaking team recognizing the audience’s awareness of the goofiness for which they have willingly plunked down money. “Happy Death Day” won’t really be that playful again, and that’s the film’s biggest problem. It doesn’t seem to enjoy its own ridiculous concept enough, and yet refuses to stage any set pieces that feel honestly scary either, allowing it to fall into some weird, bland gap in between. Worst of all, it wastes the meta-idea that a lot of horror films are basically like “Groundhog Day” to an extent, as we watch relatively indistinguishable counselors at Camp Crystal Lake, for example, get killed again and again.

College student Tree Gelbman (Jessica Rothe) wakes up in the dorm room of a young man named Carter (Israel Broussard) after a night of too much drinking. She’s wearing his shirt and her pants are on the dresser, but we later learn that Carter didn’t actually take advantage of her drunken state, just bringing her back there to make sure she didn’t choke on her own vomit “like Janis Joplin.” Of course, in a movie like “Happy Death Day” this sort character detail of what should be common human decency means Carter is the nice guy love interest.

Tree does the “walk of shame” back to her sorority house and encounters a bunch of things along the way that the filmmakers can easily repeat in their riff on "Groundhog Day." Someone wants her signature on a petition; a hipster glares at her over his sunglasses; the sprinklers go on; a car alarm goes off; a frat pledge passes out during hazing. I didn’t take notes. You’ll see all of these events a dozen times.

Before then, Tree gets back to her house, where we meet the sorority’s nasty queen bee, Danielle (Rachel Matthews), and Tree’s roommate Lori (Ruby Modine), who has baked Tree a single cupcake for her birthday. Tree goes through a rather eventful day—running late to class, having a quick hook-up with her teacher/lover Gregory (Charles Aitken), ignoring calls from her father (Jason Bayle), having a lunch meeting with her sorority at which a sister is fat-shamed, dodging college sports fans, and then getting murdered by a masked person with a large knife. At that point, she wakes up in Carter’s dorm room again, and it starts all over.

Of course, as with that logo bit, director Christopher Landon and writer Scott Lobdell know that you know what you’ve signed up for and so they very carefully and somewhat cleverly introduce their suspects in that first day. Is it the snarky rival sorority girl? The reserved roommate? The older man or his wife? Someone else we spot that first day? Most viewers will be playing the guessing game immediately, and here’s where “Happy Death Day” starts to fall apart. Pretty quickly, you’ll realize there are no hard and fast rules to this silliness, and trying to get ahead of it won’t do you any good. Without spoiling anything, it doesn’t come together in a satisfying way like “Scream” or the other great meta movies that played with audience expectations. It’s more of a “huh, ok” than a “wow,” and actually borders on a “wait, that doesn’t make sense.”

And it’s a film that I didn’t know was written by a man while I was watching it, but I knew. The film has a rather superficial approach to what it’s like to be a young woman on a college campus—they get drunk and sleep with older men and fight in sororities, right? Again, if these elements were played for parody or more broadly, they could have worked. Instead, they just create a world that doesn’t feel believable, filled with superficial college stereotypes. When Tree wakes up at Carter’s, there are posters for “Repo Man” and “They Live,” among others, on the wall. This should be a film that constantly calls attention to itself as a film and its place in the horror genre. It should wink as it scares and thrills. It does none of the above. It’s flat, and shockingly predictable.

I do have to say that Rothe, who is in every single scene of “Happy Death Day,” gives this film her all. It’s a physical, demanding performance, and she’s quite good in a way that makes me eager to see what she does next. Her performance is quite easily the best thing about the movie as she goes through nearly every emotion on her repetitive day. And as the film demands more from her in a traditional scream queen sense as it gets more intense, she nails it. She’s so good that you wish she was in a better movie. It’s a wish I found myself making over and over and over again. 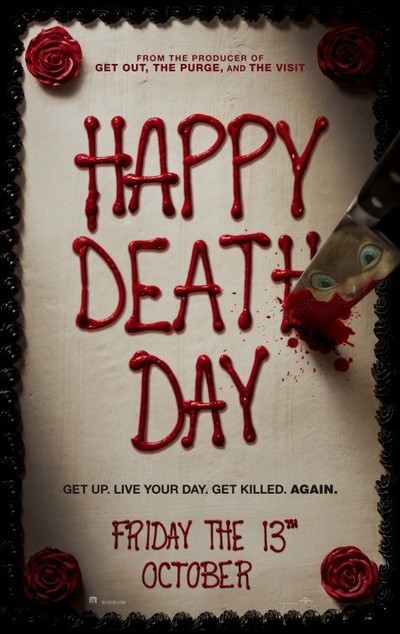