Have you ever wanted to watch Vince Vaughn beat up a car with his bare fists? Or scrape the flesh off of a man's skull? Or break several other men's heads open with a few powerful stomps? The grisly prison picture-action drama "Brawl in Cell Block 99" assumes that the answers are yes, yes and yes.

You do not watch this film so much as gape at its' creators' flights of deranged inspiration. "Weird" does not begin to cover the depth of its tough-guy eccentricities. The writer and director is S. Craig Zahler, the mind behind the horror-western "Bone Tomahawk." Working with cinematographer Benji Bakshi, he takes great pains to show you his actors' entire bodies during fight scenes. He also wrote the original R&B score, which is performed by the legendary Butch Tavares and the O'Jays. The movie makes a star of Vince Vaughn again by casting him as antihero Bradley Thomas, a skinhead drug dealer who must pummel and stomp two prisons' worth of inmates and guards in order to protect his kidnapped wife and daughter.

Like "Bone Tomahawk" before it, "Brawl in Cell Block 99" starts off slow. The script takes its time setting up Bradley as a generally sympathetic hot-head who is also mercurial enough to gradually become the film's real antagonist. After he's fired from his auto-repair gig and discovers his wife Lauren (Jennifer Carpenter) has been cheating on him, he dismantles her car. But he keeps it together long enough to show that he has a plan and has previously earned Lauren's trust (offscreen, sometime prior to the film's events). He tells Lauren that he will resume an old, well-paying job delivering drugs in order to bring more money home, swears that he wants to reinvigorate their marriage by having a baby with her, then accepts her apology and asks her if she will "abide" by his terms. He makes this request after destroying her cell phone and totaling her car, mind you; nevertheless, Lauren agrees to abide. Suffice it to say that Bradley eventually ends up in prison, where he is forced to keep his rage in check despite numerous dehumanizing factors.

Sporting a shaved head with a huge crucifix tattooed on the back, Vaughn looks like an editorial cartoon of urban crime come to life. He's a damn good boogeyman: an unrepentant rage-case with a knack for brutality. But he does everything purposefully, from race-baiting Mexican bodybuilders to breaking the bones of white and black prison guards alike. And the writing convinces you that he believes in family values as well as in the idea that you should never start a fight you aren't willing to finish.

The character is made nearly charming by his martyr-like willingness to silently suffer ungodly punishment, his hard-boiled quips, his wing chun-meets-boxing fighting skills, and most of all by Vaughn's performance, which is revealed mostly through the actor's stiff gait, arch posture, and furious punches (augmented by meat-slab sound effects). Zahler has given Vaughn one of his most satisfying dramatic roles to date, and the actor makes Bradley seem as evidently volatile as he is potentially heroic.

"Brawl in Cell Block 99" is a grade-A piece of meathead cinema, the kind of exploitation movie whose deepest thoughts are Am I more animal than human? and How far is a man willing to go to protect his loved ones? These would be insufferably trite themes if Zahler wasn't so good at drawing viewers in with sensationally staged violence and carefully observed details: the long shadows cast by billiard balls, the rustle of curtains, the eerie stillness of a door before it's bashed in, the pauses Bradley takes between beatings.

That having been said: the real reason you will either love or hate "Brawl in Cell Block 99" is its hyper-stylized violence. These scenes are inventively shot and choreographed (by fight coordinator Drew Leary and Zahler) so that we can see the actors' bodies and faces. This could not have been an easy task, since Bakshi's camera always seems to be wherever Leary needs it to not be. Nevertheless, Zahler's presentation of his actors and stunt performers makes every bone-splintering, limb-destroying, flesh-rending practical special effect that much more effective. Zahler is on to something when he says—as he did at a recent post-screening Q&A—that he thinks of movie gore as a magic trick.

"Brawl in Cell Block 99" isn't for the squeamish, nor for anyone who dislikes the idea of cheering on a guy who, in reality, wouldn't be as benign as his creators want us to think. But if you are willing to suspend your disbelief for 132 minutes, you may find yourself head-over-heels for this film's brand of gross, thoughtful pulp fiction. 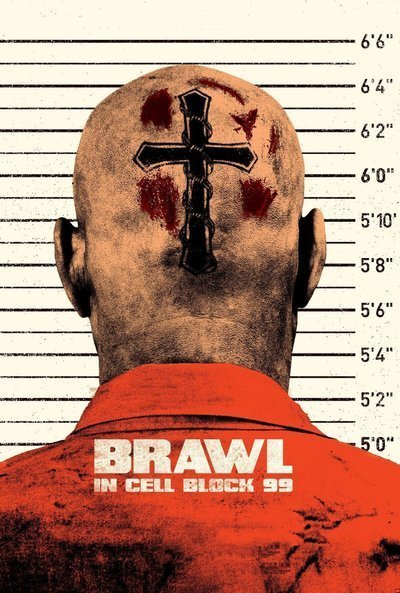