Paul Schrader’s “First Reformed,” in which Ethan Hawke brilliantly plays an alcoholic Protestant minister undergoing a profound spiritual and psychological crisis, is a stunning, enrapturing film, a crowning work by one of the American cinema’s most essential artists.

Yet in the moment I deliver that unstinting endorsement, I feel compelled to add that this is a very special film for a certain, inevitably rather limited audience. In line with other Schrader movies, but perhaps more so than any, it defines itself against many of the central assumptions and conventions of most mainstream moviemaking.

In his seminal 1972 book Transcendental Style in Film: Ozu, Bresson, Dreyer (written at age 24, two years before he turned from film criticism to filmmaking), Schrader noted that, “The many statements [Robert] Bresson has made in interviews and discussions, properly arranged, would constitute an accurate analysis of his films (a statement which can be made of no other filmmaker to my knowledge)….” It’s an astute remark, but one which Schrader perhaps now should amend to include himself.

In recent times, and especially since “First Reformed” debuted at the Toronto Film Festival last fall, the writer/director has spoken about his work in numerous interviews and discussions, and his comments—which I encourage interested readers to seek out—are invariably as stimulating and insightful as they are candid.

While many artists take pains to disguise the influences on their work, Schrader jovially confesses his, and says that the important thing is not to avoid stealing from others but to do it intelligently and strategically. From one angle, “First Reformed” is an unreformed film critic’s tour through a strain or tradition of art-filmmaking that molded him, as well as a tribute to masters including Ingmar Bergman, Andrei Tarkovsky, Carl Dreyer and, of course, Bresson.

Brought up in the Christian Reformed Church, a strict Calvinist denomination, Schrader was raised without movies but became enchanted with their forbidden pleasures when he encountered them. Later, in discovering Bresson’s “Pickpocket,” he was electrified because “I sensed a bridge between the spirituality I was raised with and the ‘profane’ cinema I loved. And it was a bridge of STYLE not content.”

That last point is crucial. Schrader continued, “Church people had been using movies since they first moved to illustrate religious beliefs, but this was something different. The convergence of spirituality and cinema would occur in style not content. In the How, not the What.”

The idea of spiritual meaning expressed in style is deftly encapsulated in the first shot of “First Reformed,” a neat synecdoche for the whole film. The camera tracks slowly forward as it gazes up at the stark white facade of an 18th century church in New York State. The building’s elegantly restrained colonial architecture, the gray sky, the stately camera movement and music all convey an austere gravity, which, together with Schrader’s use of Academy ratio (inspired, he has said, by Pawel Pawlikowski’s “Ida”), point us back not only to an earlier era of American religion but also to such European cinema models as Bergman’s “Winter Light” and Bresson’s “Diary of a Country Priest.”

With his angular frame and ankle-length black cassock, the church’s pastor has a similar iconic starkness. The Rev. Ernst Toller (Hawke) is a troubled man. The congregation that faces him from the church’s spartan pews is minuscule. At night, alone, he drinks and begins to confess his misery to a journal (a Bressonian device that Schrader has used in “Taxi Driver,” “Light Sleeper” and other films). We soon learn what’s behind his agonized countenance: He was a happily married military chaplain when he encouraged his soldier son to go to Iraq. The son was killed, Toller’s marriage collapsed and he was left devastated. His assignment at this church—which seems to do more business in tourist trinkets than souls—is equal parts penance and abnegation.

The world’s misery begins to intrude on his own when a pregnant young woman named Mary (Amanda Seyfried) enlists Toller to counsel her husband, who she believes wants her to have an abortion out of despair over the world’s future. Michael (Philip Ettinger) is an environmental activist who may be a congenital depressive but who also has solid reasons for his pessimism. In a long, striking scene early in the film, one that reminds us of Schrader’s skills as a writer, the young man and Toller discuss the ways humanity is rapidly despoiling the earth and the planet’s bleak future prospects. While the pastor urges that there are still plenty of reasons for hope, it seems he may have been influenced by Michael’s words as much as the other way around.

This situation grows more dire when Mary tells Toller she’s discovered a suicide vest that Michael has constructed. Does the activist plan to protest humanity’s destruction by staging his own? While he grapples with this, Toller faces challenges on other fronts too. Pissing blood makes him suspect he has a serious illness. His ecclesiastical superior, the buoyant pastor of a local megachurch (a fine performance by Cedric the Entertainer), tries to coax him out of his gloom and enlist his help in planning for the celebration of his church’s 250th anniversary. That effort begins to stick in Toller’s craw, though, when he realizes the extent to which it will be run by a bullying local rightwing polluter for whom he feels the deepest contempt.

Unless I miss my guess, “First Reformed” will find its least receptive audiences among those who want either a conventional psychological drama or a dogmatic exposition of spiritual themes. Neither is what Schrader’s after. From the first, style as a way of engendering spiritual consciousness has been his primary concern. In a welcome new edition of Transcendental Style, he writes of creating “an alternate film reality—a transcendent one,” in which, “The filmmaker, rather than creating a world in which the viewer need only surrender … creates a world in which the spectator must contemplate—or reject out of hand.”

Will the film’s most appreciative viewers be those who know Schrader’s writings, his previous work and the great films whose influence he freely acknowledges? No doubt. Yet “First Reformed” leaves its large front door open to anyone who accepts its invitation to adopt a contemplative stance toward cinema. For those who do, the film’s peculiar mysteries and beauties will be evident throughout: in its restrained compositions and uses of silence and empty space, in the almost liturgical unfolding of its narrative, in a climactic scene of imaginary flight and a final scene that seems aptly designed to leave one catching one’s breath, caught in the very act of contemplating this tale of faith and its worldly opponents.

And then there’s the solid anchor provided by Hawke’s performance as Toller. A fine actor from the beginning, Hawke has been growing exponentially in recent years, and this is his most expertly, movingly crafted performance yet. It is no exaggeration to say that he has given Schrader a suffering priest equal to those of Bresson and Bergman. 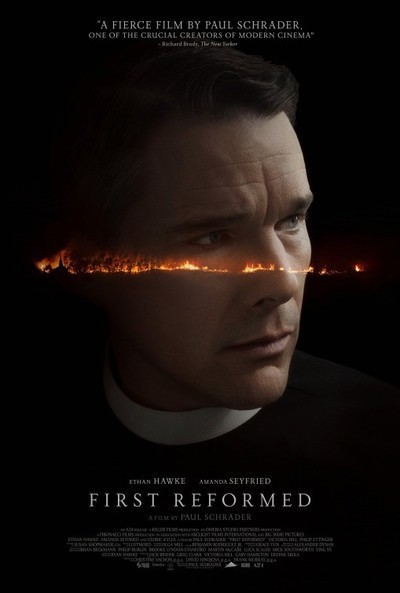 Cedric The Entertainer as Pastor Jeffers