Evolution of a Criminal

In 1997, 17-year old Darius Clark Monroe robbed a bank and went to prison for it; then he went to NYU film school and made this movie about his life. The movie presents itself as an act of atonement, and an attempt by Monroe to understand himself and the social forces that drove him to a life of crime. Executive produced by Spike Lee, who was one of Monroe's professors at NYU, it's as assured a filmmaking debut as I've seen—a genre-blurring work that has the content of a documentary but the hard-edged yet dreamy style of a crime picture by Michael Mann ("Thief," "Heat") or Albert and Allen Hughes ("Menace II Society," "Dead Presidents"). At the same time, though, there's something profoundly yet mysteriously off about it. The movie's off-ness puts an asterisk next to every superlative one could otherwise assign to it.

Monroe grew up in a Houston, Texas suburb, in a loving home overseen by a mother and father who had a peaceful and mutually supportive relationship and treated their children decently. Unfortunately, they were also a working class (sometimes the film hints at working poor) family, teetering on the edge of financial panic. Like a lot of working people, they toiled for long hours at very little pay, then spent nearly everything they earned to cover the basics and buy a few amenities, such as electronic equipment. Many Americans will empathize with this tenuous lifestyle, one in which a single devastating event can push a family over the brink into desperation.

That event came in the form of a burglary. As described by Monroe, his family and their friends, it sounds diabolically inventive, like something a Michael Mann criminal might cook up: robbers snuck into the upstairs floor of the Monroe family home, cut a hole in the ceiling of Monroe's bedroom, dropped down through it and stole everything they could, including a week's worth of pay from a check that Monroe's father had cashed but not yet deposited. As the movie describes it, the robbery initiated a financial death spiral that led Monroe to hatch a scheme to steal large numbers of VCRs from the electronic store where he worked in receiving.

One day he and his friends watched an episode of a true crime show about a bank robber, and figured that if a guy as dumb as the one on TV could knock over a bank, they could, too. He and his pals planned to rob a small, poorly secured bank branch during the second half of a school day, taking care to be sure they were marked as "present" at school so they'd have an alibi. One of Monroe's accomplices called in a bomb threat to the school to divert police attention from the crime they were about to commit. The young men made off with $140,000 but were quickly caught. Monroe was tried as an adult but copped a plea bargain and did five years behind bars.

Technically, there isn't a scene, indeed a frame of this movie that feels less than expertly realized. It's filled with dramatic re-creations of the sort that Monroe probably absorbed from the true crime show that sparked his "Eureka!" moment—it even opens with a dramatic re-creation of young Monroe being arrested by cops after the bank robbery and taken from school in handcuffs—but they're all done in a hypnotic style that includes off-centered framing and emotionally expressive slow-motion.

In an ordinary nonfiction film, these sequences might contrast awkwardly with the more straightforward interview sections, home video snippets, family photographs and other standard materials in the documentary toolkit. But Monroe and his collaborators have presented the other material in a similarly Mann-like style, so that the whole thing has a slightly cosmic vibe, sometimes bordering on horror or science fiction. When we see Monroe interviewing, say, his mother or father, or a bank customer who says that if he hadn't found Jesus when Monroe went to prison he would have probably attacked him if he'd run into him on the street, the content of the exchanges is innately powerful, but the style adds another layer of intensity, thanks to cinematographer Daniel Patterson's aggressively dynamic frames (he favors converging perspective lines), composer T. Griffin's trance-inducing synthesized score, and editor Doug Lenox's unpredictable cuts.

What's missing is a sense of how Monroe, seemingly a law-abiding young man before his family's financial dark days, suddenly went from being a go-along-to-get-along type to a budding criminal mastermind. I'm not making a moral judgment call here: I've seen and read first person, true crime stories by a lot of people who did worse things than Monroe and found them fascinating as art or journalism. This is a storytelling issue. Some connective tissue is missing.

Human history is filled with people who responded to sudden financial desperation by turning to crime, and some of them may even have stolen property from employers or tried to rob a bank. ("The Dog," about the real-life petty criminal that "Dog Day Afternoon" is based on, is one such movie.) But there was always an escalation. The criminal started out doing relatively minor crimes and worked his way up to bigger ones. Here, Monroe presents himself as, simultaneously, a Walter White-type whose dormant criminal intelligence is activated by trauma, and (humbly) as a Jean Valjean type, stealing to help his family.

But this is life, not fiction, and we're not talking about a loaf of bread here. It takes a bold and steely person to come up Monroe's VCR theft scheme, which was systematic and involved, and an even bolder, steelier person to mastermind a bank robbery while in high school. And the defense that he was only doing it to help his family doesn't really sync up with the complexity of the crimes we're told about.  It feels as though key information has been skipped over or left out, for reasons one cannot surmise based on the information that's been presented. In terms of character development, "Evolution of a Criminal" jumps from point A to point Z and leaves out the rest of the alphabet. The title of the movie makes a promise that isn't delivered. The criminal part is brilliantly realized, but there's not enough evolution. 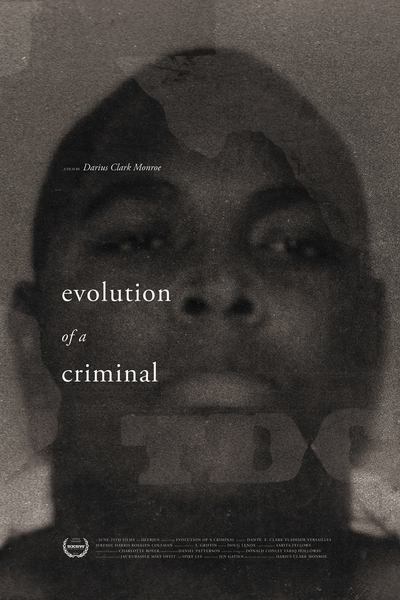